As Russian Tanks Move Toward Ukraine, The Globe Braces For World War 3 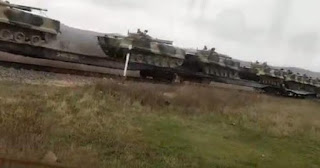 Authored by Michael Snyder via The Economic Collapse blog,(Zerohedge) - At this hour, more Russian military forces are massed near Ukraine’s borders than we have ever seen before.

Western military leaders say that they are concerned that the troop movements that we have witnessed in recent days may be leading up to an invasion, and if an invasion does happen it will greatly test the resolve of the Biden administration, EU leaders and NATO brass. In particular, the hawks in the Biden administration would almost certainly not be willing to just sit back and let the Russians conquer all of Ukraine. There would likely be a major response by the United States, and that could set off a chain reaction that could ultimately spark World War 3.

Fresh train video from the Rostov region. Brownie points to anyone who can translate. pic.twitter.com/wECUqrwFiN

So what made the Russians suddenly move a massive invasion force toward Ukraine?

Well, it turns out that Ukrainian President Volodymyr Zelensky essentially signed a declaration of war against Russia on March 24th. The document that he signed is known as Decree No. 117/2021, and you won’t read anything about it in the corporate media.

I really had to dig to find Decree No. 117/2021, but eventually I found it. I took several of the paragraphs at the beginning of the document and I ran them through Google translate…

In accordance with Article 107 of the Constitution of Ukraine, I decree:

1. To put into effect the decision of the National Security and Defense Council of Ukraine of March 11, 2021 “On the Strategy of deoccupation and reintegration of the temporarily occupied territory of the Autonomous Republic of Crimea and the city of Sevastopol” (attached).

2. To approve the Strategy of deoccupation and reintegration of the temporarily occupied territory of the Autonomous Republic of Crimea and the city of Sevastopol (attached).

4. This Decree shall enter into force on the day of its publication.

March 24, 2021
Basically, this decree makes it the official policy of the government of Ukraine to retake Crimea from Russia.

Of course the Russians will never hand over Crimea willingly because they consider it to be Russian territory, and so Ukraine would have to take it by force.

This is essentially a declaration of war against Russia, and Zelensky would have never signed such a document without the approval of the Biden administration.

Following the signing of Decree No. 117/2021, we started to see Russian forces pour into Crimea and into separatist-held areas of eastern Ukraine at a staggering rate.

For example, you can watch a column of Russian tanks being transported by rail right here.

And you can see a massive column of Russian forces on the Crimea bridge right here.

In addition, it is being reported that the 56th Guards Air Assault Brigade is on the move, and that is not a good sign at all.

For those who don’t know, this isn’t the brigade you want to see on the move.

The 56th Guards Air Assault Brigade is an airborne brigade of the Russian Airborne Troops. The brigade was first formed in 1979 and fought in the Soviet–Afghan War, the 1st & 2nd Chechen War. https://t.co/lAthOpiIvw

The Russians are taking Zelensky’s declaration of war very seriously, but the corporate media in the western world is blaming “Russian aggression” for the increase in tensions in the region.

But the truth is that the Russians never would have made any of these moves if warmongers in the Biden administration had not given Zelensky the green light to sign Decree No. 117/2021.

And what most people in the western world don’t know is that fighting has already begun in Ukraine. The ceasefire that was agreed to in July 2020 has been violated hundreds of times over the past week…

The OSCE’s civilian Special Monitoring Mission to Ukraine has reported hundreds of cease-fire violations in recent days. On March 26, four Ukrainian soldiers were killed and two others injured in the eastern part of the country.
The Ukrainian military said its soldiers were hit by a mortar attack it blamed on Russian troops. Russia denies having a military presence in eastern Ukraine, where it backs separatist forces.

At this point, the ceasefire of July 2020 is completely dead.

In response to the renewed fighting, U.S. European Command “has raised its alert status to the highest level”…

U.S. European Command has raised its alert status to the highest level after fighting resumed between Russian-backed separatists and Ukrainian soldiers in the Donetsk Region of eastern Ukraine, marking the end of a June 2020 ceasefire, and Russian forces began building up military equipment along the border.

In a statement on Facebook on Wednesday, the Russian Ministry of Defense said that at the initiative of the U.S., chairman of the joint chiefs of staff, Mark Milley, had a telephone conversation with his counterpart. “Issues of mutual interest were discussed,” the statement said.

In the days ahead, the corporate media in the western world is going to continue talking about “Russian aggression”, and the Russians are going to continue to blame Zelensky and the Biden administration for the rise of tensions in the region.

But what really matters is keeping this from escalating into a global conflict. Because if someone does something really stupid and the Russians feel a need to send their invasion force into Ukraine, there will be no going back ever.

I have been warning about a future conflict between the United States and Russia for a very long time, and we have never been closer than we are right now.

With Trump in the White House, relations with Russia were relatively stable, but now Joe Biden is in charge.
Biden is a hothead that is showing signs of advanced cognitive decline, and he is surrounded by a team of warmongers that are determined to put Russian President Vladimir Putin in his place.
The inmates are running the asylum, and it won’t take much of a mistake at all for things to go horribly, horribly wrong.

Michael’s new book entitled “Lost Prophecies Of The Future Of America” is now available in paperback and for the Kindle on Amazon.
Source