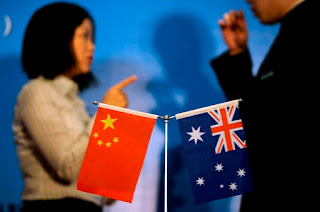 Changes are taking place in Australian foreign policy. The country is tending towards a tougher stance in defense of Western interests and plans to cease important strategic ties with China and other nations not aligned to the West. While this type of stance is expected from a country with strong historical ties to Western powers, such as Australia, it is possible that, in the context of the emergence of a multipolar world, such radical measures will harm Australia’s own interests.

The Australian federal government intervened in an abusive way in the autonomy of the states last Wednesday, by unilaterally canceling four international agreements that the state of Victoria had with other countries. The agreements canceled by the Australian government were: a memorandum of understanding between Victoria and the Chinese State with the promise of mutual work on road infrastructure for the Belt and Road Initiative; the mutual promise to create a working group to improve bilateral diplomatic relations between China and Australia; another memorandum of understanding, signed with the Iranian Ministry of Labor in 2004, seeking cooperation on labor issues and; a scientific cooperation protocol with the Syrian Ministry of Higher Education, in force since 1999.

As we can see, two of these agreements were signed between Victoria and the Chinese government, having been in force since 2018 and 2019 with the aim of integrating the Australian state into Xi Jinping's Belt and Road Initiative. Regardless of the ideological stance of the Australian government, the measure sounds unnecessarily aggressive, considering that the agreements benefited Australia economically without any prejudice to the ideological issue. The main criticisms that Australian experts have made against the agreements with China refer to the fact that the state of Victoria has not tried to negotiate better environmental, labor, and democratic conditions for cooperation. In other words, what the critics of the agreements say is that the state has not tried to impose Western values ​​on China in exchange for cooperation - which is absolutely understandable: the purpose of the agreements is mutual benefit, not ideological imposition.

The initiative for the cancellation was taken by the Minister of Foreign Affairs, Marise Payne, who believes in the total incompatibility between Australian diplomacy and economic cooperation with China, as evidenced by her words: “I consider these four arrangements to be inconsistent with Australia's foreign policy or adverse to our foreign relations". In fact, this Australian foreign policy orientation is not really new. The total alignment between Australia and the other Western powers has undermined bilateral relations with China since 2018, when Canberra vetoed Chinese participation in the Australian 5G technology market, giving Western companies commercial priority. Shortly thereafter, with the start of the pandemic, Prime Minister Scott Morrison also made allegations of anti-scientific and xenophobic content when requesting investigations on the origin of the new coronavirus, suggesting at a possible artificial origin in China. Indeed, the Australian stance on China has been one of the most radical in the whole world, being a true frontal opposition. For example, few countries have adhered to Washington’s plans to undermine the Chinese technological market, which makes Canberra’s position a full and unrestricted support for the U.S. - support that, as we can see, was unaffected by the American presidential transition, showing an episode of automatic alignment.

China immediately responded to the Australian attitude by repudiating notes at the Embassy in Canberra, where it was said that: "This is another unreasonable and provocative move taken by the Australian side against China. (...) It further shows that the Australian government has no sincerity in improving China-Australia relations. (...) [This move] is bound to bring further damage to bilateral relations, and will only end up hurting itself”. No retaliatory measures have been taken by the Chinese government to date, but bilateral relations have evidently become more fragile and unstable. Chinese international praxis is not retaliatory, generally seeking only mutual economic benefits with the nations with which it makes agreements. Chinese ideology, although very strong in internal decision-making, is almost null when it comes to Beijing's diplomacy. Therefore, it is possible that the Chinese government will only repudiate Australian action, without taking equivalent measures that further worsen ties.

The drop in ties between China and Australia will not affect Beijing so strongly as it will with Canberra, which will increasingly lose Chinese capital's share in its economy. The Chinese are Australia’s largest trading partners, in addition to great scientific cooperation, with the majority of exchange students on Australian soil having Chinese nationality. Certainly, the stance of the federal government will also generate internal tensions as not all states are willing to give up their economic benefits in order to meet the ideological desires of the federal government. This is precisely the case in the state of Victoria, where, with the agreements, Labor Premier Dan Andrews had consented to China's development and infrastructure initiatives as a way to bring Australia and the whole of Oceania closer to the integration between Asia, Europe and Africa promoted by Beijing. Victoria is a real pillar of the Australian economy, being the second richest state in the country. A crisis of interest between Victoria and Canberra will seriously undermine any Australian national plan.

Still, it is important to note that Australia is part of the RCEP, which should mean a greater willingness to negotiate with Beijing, despite political antagonism, but Morrison's liberal government is obstinate in its hostile stance. It is possible that new measures will emerge against China, Iran, and Syria. But Beijing remains the biggest target.
By Lucas Leiroz, research fellow in international law at the Federal University of Rio de Janeiro.
Source