Battle of the police continues in US 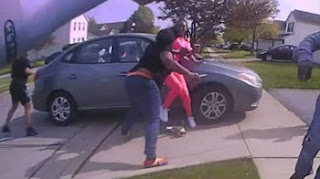 Last week former Minneapolis Police Officer Derrek Chauvin was convicted of murdering George Floyd. At about the same time as the verdict was being read, in Columbus Ohio 16 year old Ma'Khia Bryant tried to knife a woman with whom she was having a very public neighborhood dispute. Unfortunately for Ms. Bryant but fortunately for her intended victim she did so in front of a police officer, who shot and killed her. Because Ms. Bryant was black, no matter that her intended victim is black as well, the National Association for the Advancement of Colored People, various Black Lives Matter organizers and the media professed outrage at yet another police killing of a black person.
NBA superstar Lebron James Tweeted, “You’re Next #Accountabilty” along with a picture of the officer who saved the life of Ms. Bryant’s intended victim. This was a big deal. For foreign readers, America is a sports mad nation, and on any given night one can watch multiple sporting events, baseball, hockey and basketball any night of the week. Lebron James is the most important athlete in America today, so big he transcends sports. Via the NBA, commercials and movies, Lebron’s face is on television every day. One does not even need to use his last name.

After the murder of George Floyd last year, the NBA allowed players to kneel during the national anthem and wear “social justice” logos on their uniforms. Lebron James was the NBA’s de-facto BLM leader. Politics and sports are a dangerous combination. NBA ratings started strong at the beginning of the season as the league returned to a normal schedule, but have since declined. A Yougov poll taken in March found that overall 34.5 percent of Americans watch less sports due to political activism. To put it another way, delving into politics is hurting American sports and other businesses.

A few weeks ago, Coca Cola’s CEO came out against Georgia’s voting integrity law, SB202, a bill that requires voter ID but also expands voting hours and increases the number of drop boxes, among other provisions. A Rasmussen Reports poll taken in April shows that 37% of Americans are “less likely” to buy Coke. It remains to be seen what Coke’s bottom line will be. The left can boycott as well. In Georgia (again) BLM activists are boycotting Home Depot because the Atlanta based company refuses comment one way or another on SB202.

Here in New Jersey Trump announced that he will be summering at his Trump National golf club in Bedminster, just a short drive from this observer’s home. Marine One was a regular site in the skies around here. There is a talk that former governor Chris Christie may run for president. In two terms as governor, Christie was notorious for picking fights with entrenched state interests like the teacher’s union, speaking his mind and generally rubbing people the wrong way. Christie could come off as something of a loudmouthed jerk. Which sounds kind of familiar. Christie is no knee jerk Trump partisan and often very critical of his administration, especially his handling of the January 6th Capitol Hill protest. He ran for president in 2016, but didn’t get far in an overcrowded race. Christie left Trenton with a bang in 2017, shutting down the government in a dispute with the Democrat controlled legislature and then heading off to the beach with his family. He’s been a political analyst for ABC news, making him very visible. In 2020 Christie contracted Covid and spent several days in the hospital.

For a lifelong resident of the East Coast like this observer, California has always been a bit out there, weird even. California was once a Republican stronghold, the GOP won California in every presidential election from 1968 to 1988. Now it’s deep blue. California’s constitution provides for the recall of the governor if enough signatures are obtained. This has happened before. Back in 2002, then Governor Gray Davis was recalled and defeated by Arnold Schwarzenegger, who for a time was a Republican superstar. ‘Vote for me if you want to live,’ fans joked about the ‘Governator’.

Recall is happening again. Fed up with high taxes, crumbling infrastructure, unsafe cities and Covid lockdowns, activists have gathered over 1.8 million signatures and Governor Gavin Newsome will face a recall election this fall. Proving California can get weirder, last week transgender rights activist Kaitlin Jenner announced she’s running to replace Governor Newsome. In another life Kaitlyn Jenner was Bruce Jenner, Olympic Gold medalist and sports superstar whose image graced televisions and breakfast cereal boxes. Oh, Jenner is running as a Republican. Let the woke activists in California have fun with that. California is a lot bluer now than it was in 2003, and Governor Newsome should be the favorite. It’s called ‘the left coast’ for a reason.
By William Stroock, commentator, author of military fiction.
Source