Biden meets the press, stumbles, rambles and talks about filibuster 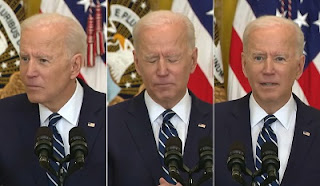 Joe Biden held his first press conference last Thursday and it went exactly as expected. Taking preapproved questions from friendly reporters and reading off cue cards, Biden promised extensive action on guns, the border crisis and infrastructure among other issues. He stumbled, he rambled, and he wandered off. ‘So, the best way to get something done, if you…if you hold, it near and dear to you, that you…uh, uh, like to be able to, uh - well, anyway.’ The media praised the performance, of course.

Biden was talking about the senate filibuster. We kept waiting for Joe to break out one of last year’s classics and say, ‘You know, the thing!’ Briefly, in the 100 seat senate, 60 votes are needed to end debate and bring legislation to the floor for a vote. The purpose of the filibuster is to slow things down, encourage negotiation, and keep the majority from running roughshod over the minority.

The senate is split 50/50 with Vice President Kamala Harris casting the tiebreaking vote. Two Democrat senators say they won’t vote to get rid of the filibuster. One is Joe Manchin. Manchin represents the deep red state of West Virginia. He’s a career opportunist who represents Joe Manchin. The other no vote is Kyrsten Sinema, a Democrat in a pink state who has proved to be an independent and downright quirky senator. A few weeks ago she delivered a ‘no’ vote to a $15 minimum wage bill with a dramatic thumbs down flourish, When asked for the millionth time if she would vote to uphold the filibuster Sinema replied, ‘I admire your enthusiasm!’

America is 50/50 too, but once reliable red states like Georgia and Arizona are now battlegrounds. That’s tough news for Republicans and MAGA nation. No Trump supporter (including this one) believes Joe Biden got 81 million votes, 12 million more votes than the truly popular Barrack Obama won in 2008. Even with demographic changes, that doesn’t pass the smell test. But even if the real number of Biden voters is 73 million, or 70 million or 65 million, that’s still tens of millions of people who voted for a 77-year-old former VP who’s been in politics long enough to have voted on Vietnam War issues. What can the right do about that?

For now the right can sort itself out. Nobody knows if Trump will run in 2024. If he doesn’t there’s several candidates that appeal to the new Trumpian Republican Party, including South Dakota governor Kristi Noem. She hosted President Trump and a Mount Rushmore campaign/patriotic rally last summer and stood with the president throughout the election and the legal battles that followed. Noam rejected a statewide lockdown and mask mandate. America is currently tearing itself apart of the matter of transgender rights and biological males competing in women’s sports. This month Noam promised to sign a bill that would ban biological males from competing with women in high school and college sports. However once the bill passed the legislature, Amazon and the NCAA threatened to boycott the state and Noem changed her mind. This is a massive unforced error on Noem’s part.

Noam handled the aftermath terribly. In a televised interview she condemned ‘conservative cancel culture.’ What Republican political consultant came up with that? The Republican base, made skeptical by a party that won big elections but delivered few results, now wonders if Noem simply made a mistake and compounded it, or if she was posing all along. Cleary she didn’t sense the moment.

The modern GOP isn’t the party of the Bush’s or former House Speaker Paul Ryan, concerned with marginal tax rates and a corporate friendly business climate. As the late Andrew Breitbart once said, politics is downstream from culture. And that is where the Republican base is.
Source