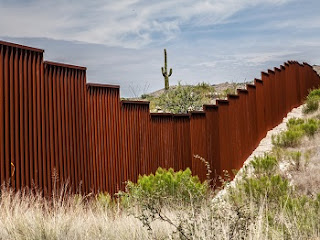 With a serious migration crisis on the U.S.’ southern border, two Yemeni terrorists and a member of the El Salvadoran Mara Salvatrucha (MS-13) gang organization attempted to enter the country illegally. The identity of those arrested has not been disclosed. This comes at a time when U.S. President Joe Biden needs a pretext to continue the construction of “Trump’s wall.”

Surprisingly, amid the worsening migrant crisis on the border with Mexico, the capture of two Yemeni terrorists was suddenly announced. It is striking that the news of their capture was only announced on April 5 by Customs and Border Protection (CBP), long after their respective arrests - 66 days after a 33-year-old Yemeni was detained on January 29, and six days after the capture of a 26-year-old.

Unlike other similar cases in the past, their identity was not revealed and only photos with their censored eyes were published. This is despite the fact that the pair were supposedly on the FBI blacklist, according to the Daily Mail. The identity of a 28-year-old member of the MS-13 gang was also kept secret.

It is notable that the Yemenis attempted to enter the U.S. from California and not from Texas, which has a 2018km shared border with Mexico. This accounts for about two-thirds of the U.S. border with its Latin American neighbor and is where Trump erected and projected his 386km wall. It is worth noting that there are 50 legal border crossings, both pedestrian and vehicular, on the 3,200 km long border between the U.S. and Mexico.

Unsurprisingly, the attempted infiltration by transnational terrorists has spread to the U.S.’ southern border. The CBP downplayed this and said in a statement last week that “encounters of known and suspected terrorists at our borders are very uncommon.”

However, Republican House Minority Leader, Kevin McCarthy, said last week in a press statement from the U.S.-Mexican border that migrants are “not just people from Mexico or Honduras or El Salvador. They’re now finding people from Yemen, Iran, Turkey. People on the terrorist watch list they are catching, and they’re rushing in all at once.”

The attackers on 9/11 entered from Canada, which has an 8893 km border with the U.S. - 2.7 times longer than the one from Mexico. The only terrorists to have entered the U.S. from Mexico between 1975 and 2017, according to the CATO Institute, were three Albanians from Yugoslavia who arrived in 1984 as children with their relatives. However, the attempts to enter the U.S. from Mexico by the two Yemenis suggests that the Latin American country could be a new point of entry for international terrorists.

The XEVT portal reported that Mexican President López Obrador “maintains coordination with the U.S. Government to monitor possible terrorist acts.” Obrador pointed out that “historically in Mexico, this type of situation has not been seen, that is, they use our country to enter the United States.”

This leads to two conclusions; either these mysterious and unnamed terrorists attempted to enter the U.S. from Mexico as was officially announced, or it is a false flag operation to legitimize Biden’s continuation of Trump’s border wall with less outrage from the Democrat base. The erection of a border wall has been frequently discussed and announced by U.S. presidents – Republicans and Democrats alike. It now appears that Biden, despite his promises, will continue Trump’s construction.

According to the Washington Times, it is highly likely that Biden will resume Trump's border wall project in order to plug “gaps in the wall.” Biden has rhetorically lashed out at the $1.4 billion “Trump Wall,” but so far, he has not ceased construction.

It also appears that Department of Homeland Security Secretary Alejandro Mayorkas has provided Biden with a legitimizing way to continue the construction of Trump’s wall, particularly in “areas of the wall that need renovation” and “projects that need to be finished.”

Given the fact that no names have been released and that it took an unusually long time for the CBP to announce the capture of Yemeni terrorists, there are strong suggestions that this could be a false flag operation to legitimize the necessity for Biden to continue constructing Trump’s border wall despite his vehement condemnation of it.
By Paul Antonopoulos, independent geopolitical analyst
Source