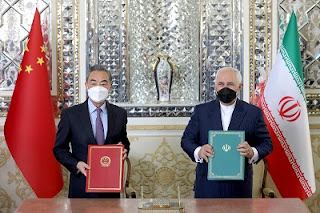 Following the visit of Chinese Foreign Minister Wang Yi to Tehran on Saturday, China and Iran agreed to a 25-year-long trade agreement worth $400 billion. The partnership not only confirms the good relationship between Beijing and Tehran, but is also a step towards independence from Western economic and geopolitical dominance.

Iranian Foreign Minister Mohammad Javad Zarif welcomed the signing of the treaty on his Twitter account: “Excellent exchange on expansion of global, regional and bilateral cooperation in the context of our comprehensive strategic partnership, culminated in the signing of a historic 25-year strategic roadmap.”

The Chinese-Iranian pact was first proposed during President Xi Jinping’s visit to Tehran in January 2016. Xi and his Iranian counterpart Hassan Rouhani agreed at the time, according to a joint statement, to establish a roadmap for “reciprocal investments in the fields of transport, ports, energy, industry and services.” Therefore, it was expected that the deal would be signed since Iran and China have been negotiating for a long time.

Last July, the two countries even announced that they had reached an agreement. Ayatollah Khamenei, Supreme Leader of the Islamic Republic, declared that “the Iranian government and people are seeking, as they always have done, to expand their relations with independent and reliable countries such as China.” Therefore, this agreement is a positive response to the Chinese “win-win” commercial logic.

Because intensified economic sanctions have been imposed since 2018, the Iranian economy is struggling. Former U.S. President Donald Trump successfully prevented other countries from trading with Iran. Faced with this quasi-embargo, Iran perceives the new agreement with China as a first major step towards economic recovery. China is already an important economic and military partner of Iran, but by Beijing investing in Iranian infrastructure, energy, transport, and military, the $400 billion over 25 years will ensure that the Islamic Republic is the most important country in the region despite Western sanctions.

Correlation on the decline of European exports and the increase of Chinese exports to Iran since the 2000’s is attributed to the dissuasive effect of American sanctions on European companies wishing to trade with Iran. During the past year, Iranian exports to China were $8.9 billion, while imports from China reached $9.7 billion.

Zarif told Wang on Saturday: “We thank China for its valuable positions and actions in a period of cruel sanctions against Iran.” Iranian trade has been decreasing since 2018 because U.S. sanctions prevent the country from selling its oil and gas so easily. Even China itself had to reduce its oil purchases from Iran because of sanction impacts.

By initiating the Sino-Iranian partnership, the two countries make use of each other to resist U.S.-led pressure. China can consolidate the Belt and Road Initiative to Iran, a country that is at the crossroads of South Asia, Central Asia, the Middle East, Anatolia and the Caucasus. Iran meanwhile can escape the asphyxiation of Western sanctions. In addition, this partnership also serves specific geopolitical and economic interests.

The new bilateral agreement comes amidst a tense geopolitical context between Beijing and Washington. For several weeks, Beijing has been lambasted by the West for allegedly persecuting the Muslim Uyghur minority in Western China’s Xinjiang province. In an exchange with the Chinese President, Joe Biden said on March 25: “And as long as you and your country continues to so blatantly violate human rights, we’re going to continue, in an unrelenting way, to call to the attention of the world and make it clear — make it clear what’s happening.”

Accusations of persecuting the Uyghur minority have intensified in recent years. This is in addition to allegations of Iran violating the human rights of its own citizens because of its theocratic governance.

For Tehran, the Sino-Iranian deal is a clear message of independence and demonstrates that they are not reliant on the West. This is exemplified as Iran is being pushed away from the West and is going to strengthen its strategic relationship with Beijing. Iran wishes to position itself as the main country that connects East and West. And certainly the country will not wait for the West to make any rapprochement as it must develop its economy that has been stagnant since 2018. China has not only provided a lifeline, but a game changing initiative that turns Iran into a crucial hub of the Belt and Road Initiative.

The fact is that China, when it comes to its dealing with the Middle East, pursued a very delicate policy and did not impose any of its dogmas, did not interfere in any conflicts, developed economic cooperation, and implemented serious projects like the Belt and Road Initiative. Because of this, other countries in the region will also begin to turn to China, especially as Washington’s influence in the Middle East has weakened. Although the U.S. military still has a strong presence in the region, it has not achieved any victories to ensure American hegemony. Therefore, China will continue its policy of non-interference with a focus on economic cooperation as a means to project its own influence and credibility in the Middle East, as an alternative to the domineering demands and expectations of the U.S.
Source