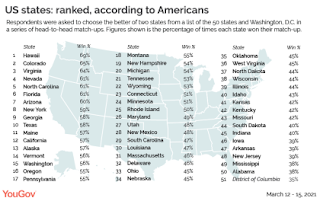 Last week YouGov released a poll about the public image and rankings of the 50 American states plus Washington D.C. Respondents ranked their own state first 77% of the time, meaning larger states were at the top of the list and smaller states at the bottom. Washington D.C. finished dead. This is probably because of D.C.’s small population and Republicans loathing the District. Unsurprisingly Hawaii ranked first. This observer has been to the Aloha state. Honolulu is basically a midsized American city with great weather, beaches, and a lot of Japanese tourists. Signs leading to Pearl Harbor are printed in English and Japanese. Nevada is number 4; and people are probably thinking of Las Vegas.

This observer’s adopted home state of New Jersey ranked 48 in the YouGov poll, which is also not surprising. New Jersey has a terrible reputation and is usually associated with organized crime (even before the hit mob show, The Sopranos) and pollution. Drivers leaving Manhattan will see a labyrinthine collection of highway overpasses, railyards, the Meadowland Sports Complex, Newark Liberty International Airport, and the Port of Newark. It’s quite an eyesore.

Fifty states mean fifty different strategies for managing Covid-19 and fifty different results. In some states the pandemic is spreading. The virus has spiked in Michigan (ranked 20th). Despite lockdowns the state is averaging nearly seven thousand new cases per day. In Oregon (ranked 16th), the department of Occupational Safety and health is considering permanent mask rules. Meanwhile, Florida (ranked 6th) and Texas (ranked 10th) are completely open and seeing drastic declines in their Covid-19 infection rate. Neither state has a mask mandate while Michigan does.

So does New Jersey. The virus peaked here for the third time and now the infection rate is plummeting. New Jersey was one of the Covid hotspots last spring, and Governor Murphy made many of the same mistakes as New York Governor Andrew Cuomo. Like Cuomo Murphy ordered nursing homes to accept Covid-19 positive patients, resulting in several thousand deaths. Overall New Jersey has suffered 971,782 infections and 25,094 deaths. But governor Murphy has never come off as a bully, as did Cuomo who made a habit of threatening people, especially New York State’s Orthodox Jewish community. ‘Don’t be a knucklehead’ Murphy admonished New Jersey residents. Overall, 2,428,756 vaccine doses have been administered in New Jersey, including this observer who received his second dose last week without side effect.

Down in Georgia (ranked 9th) the Republican controlled legislature passed SB-202 a bill that requires voter ID but also expands voting hours and increases the number of drop boxes, among other provisions. Republican governor Brian Kemp, who dismissed Trump’s claims of voter fraud last November, signed SB202 and has defended the bill against comparisons to Jim Crow.

A massive corporate backlash against SB202 ensued. The most famous example right now is Major League Baseball, which moved its mid-summer All-Star Game out of Atlanta in wake of the law. This was an incredibly divisive move. Losing the game is costing Atlanta an estimated $100 million. The Allstar Game was to commemorate one of baseball’s greatest players, the Atlanta Brave’s Hank Aaron, the African American player who broke baseball’s all-time homerun record in 1974. Bear in mind that Atlanta is a majority African American city.

Other corporations weighed in on SB-202. Coca Cola came out against the law and its CEO went on television to condemn the law, calling it ‘unacceptable’ and a ‘step backwards.’ Back in Georgia, Delta Airlines, headquartered in Atlanta, condemned SB202 as well. The Georgia state House responded by revoking Delta’s tax credit. A further hundred corporations signed an advertisement run in the Washington Post and New York Times condemning SB202 and voting laws in general. Interestingly Coca Cola, after so publicly condemning SB202 did not sign the advertisement. Instead they issued a statement saying that it is, ‘certainly open to hearing their perspective’ and ‘it’s time to find common ground.’ This is mealy mouthed corporate pap, but also conciliatory.

Though we do not have sales numbers yet, Coca Cola is certainly seeing sales decline. We know this because of the Gillette example. In 2019 the shaving company decided to ‘get woke’ and run ad campaign targeting ‘toxic masculinity’. That is Gillette decided to market shaving razors and gel by criticizing their customers. The campaign was a disaster and parent company Proctor and Gamble suffered an $8 Billon write down. Baseball is already suffering. A recent Morning Consult poll found that baseball slipped from a net favorability rating among Republicans of +47 in March to +12 in April. To put it another way, Major League Baseball has made an enemy of the GOP. Republican controlled states like Arizona and Texas are crafting voter ID legislation similar to Georgia’s. The corporate battle is sure to continue.
By William Stroock, commentator, author of military fiction.
Source