Cracks in QUAD as US violates Indian sovereignty? 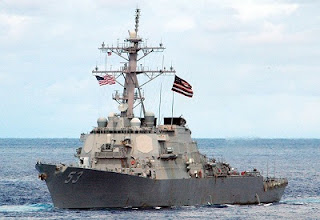 Through diplomatic channels, New Delhi protested to Washington on April 9 about the American warships that illegally entered the Exclusive Economic Zone (EEZ) of India. The Seventh Fleet's USS John Paul Jones frigate was en route from the Persian Gulf to the Strait of Malacca before it illegally entered India’s EEZ close to the Lakshadweep archipelago to the southwest of the Indian mainland in the Arabian Sea.

Under Indian laws and regulations, foreign ships can freely pass through Indian territorial waters. However, this only applies to civilian and commercial ships, and warships must receive approval from India to pass through. New Delhi’s position is consistent with the United Nations Convention on the Law of the Sea (UNCLOS), which states that any warship must receive the consent of coastal states to pass through.

Since 1979, the U.S. has conducted activities to ensure “freedom of navigation” around the world. The purpose of these activities is to not recognize unilateral actions by states that restrict the travel of foreign ships. Specifically, this is about warships and aircraft to areas that Washington considers free seas.

The USS John Paul Jones ship incident is not an isolated case though. The same thing happened in November 2020 when the USS John S. McCain destroyer entered Russian territorial waters in Peter the Great Bay in the Sea of Japan. After being warned by the Russian navy, American ships quickly retreated into international waters, but a spokesman for the Seventh Fleet declared: “All of our operations are designed to be conducted in accordance with international law and demonstrate that the United States will fly, sail, and operate wherever international law allows - regardless of the location of excessive maritime claims and regardless of current events.”

The U.S. unsurprisingly has a similar view when it comes to “free navigation” operations in the South China Sea. For example, when travelling near the Spratly Islands, the U.S. claims that these are international territorial waters. This is aimed against China, which claims 80% of the South China Sea as its own territory, but this also applies equally to all other countries in the region such as Vietnam, the Philippines, and Indonesia, who also claim sovereignty over the Spratly Islands.

However, there is a paradox to the U.S. invoking UNCLOS to justify carrying out activities to ensure “freedom of navigation.” Following the November 2020 aggression, the U.S. Seventh fleet emphasized that “As long as some countries continue to assert maritime claims that are inconsistent with international law as reflected in the 1982 Law of the Sea Convention and that purport to restrict unlawfully the rights and freedoms enjoyed by all States, the United States will continue to defend the rights and freedoms of the sea guaranteed to all.” Of the 193 United Nations member states, the U.S. is one of only 15 countries who have not signed UNCLOS – some of the non-signatories are landlocked countries

Former Commander-in-Chief of the Indian Navy, Admiral Arun Prakash, wrote on Twitter: “There is irony here. While India ratified UN Law of the Seas in 1995, the US has failed to do it so far. For the 7th Fleet to carry out FoN [Freedom of Navigation] missions in [the] Indian EEZ in violation of our domestic law is bad enough. But publicising it? USN [United States Navy] please switch on [Identification, Friend or Foe]!”

Washington wants to live up to the notions of freedom of navigation, but it does not take international treaties seriously and the laws of sovereign states.

As the retired Admiral Prakash added in another tweet: “FoN ops by USN ships (ineffective as they may be) in South China Sea, are meant to convey a message to China that the putative EEZ around the artificial [South China Sea] islands is an ‘excessive maritime claim.’ But what is the 7th Fleet message for India?”

This is all the more curious considering that in recent years India has become an enthusiastic member of QUAD to contain and/or limit Chinese influence in the Indo-Pacific region. As China has a close alliance with Pakistan – economically and militarily – New Delhi believes that by joining QUAD alongside the U.S. (a global power), Japan (an Asian regional power) and Australia (an Oceanic regional power), they will be able to offset China’s growing dominance in the vast Indo-Pacific region.

As demonstrated by the actions and responses from the U.S. Navy’s Seventh Fleet, Washington does not view India as an equal partner to counter China, but rather a vassal whose sovereignty can be violated condescendingly. New Delhi claims that Beijing tacitly supports terrorist organizations based in Pakistan that undermine Indian sovereignty in Jammu and Kashmir. Under this justification, New Delhi began to rapidly realign its foreign policy towards Washington. This has not strengthened India’s territorial sovereignty though, and rather it has opened a new front for violations as the U.S. unapologetically sails through Indian waters without approval or within the bounds of international law.

This raises questions on whether cracks are beginning to already emerge in the QUAD Alliance.
Source