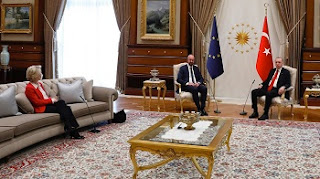 Defying UN resolutions related to Cyprus, declaring a “casus belli” if Greece enacts its legal right to expand its territorial waters to 12 nautical miles, and daily territorial violations against European Union Member States – these examples of Turkish aggression, among others, has not resulted in the same widespread condemnation as President Recep Tayyip Erdoğan’s snubbing of European Commission President Ursula von der Leyen during her visit to Ankara with European Council President Charles Michel on Tuesday.

Despite planning this trip for months, when it was time for the three leaders to sit down, there were just two chairs. The two men took a seat in Ottoman-style chairs while Leyen was left standing, making her anger clear with an “Ahem” (“Ähm” in her native German) and a hand gesture. She eventually sat down on a sofa, well away from Erdoğan and Michel, sparking what has been dubbed as “#SofaGate.”

The humiliation against Leyen could have easily been sidelined as a technical error and forgotten about with a simple apology. However, as Erdoğan continues to face significant domestic pressure because of a currency and economic crisis, his government is unwilling to show any perceived signs of weakness. Instead, Turkey blamed the European Union and its protocols for Leyen not being offered a chair. It was not Turkey’s endless threats of war and territorial violations against fellow European Union members that created an outcry amongst European leaders, but the snubbing of a female European leader less than a month after Erdoğan withdrew his country from the Istanbul Conventions on protecting women from domestic violence.

Italian Prime Minister Mario Draghi slammed Erdoğan on Thursday, saying: “I absolutely do not agree with Erdogan’s behavior towards President von der Leyen. ... I think it was not appropriate behavior and I was very sorry for the humiliation von der Leyen had to suffer. With these, let’s call them what they are - dictators - with whom one nonetheless has to coordinate, one has to be frank when expressing different visions and opinions.”

Describing Erdoğan as a “dictator” was a surprising choice of words for Draghi considering that Italy is one of the very few countries in the 27-member European Union to continually veto a Greek-led initiative to sanction Turkey for its territorial violations, threats of war, and instigating a migrant crisis in February-March last year. Draghi, who has been Prime Minister since only February 13, has indicated that Rome's appeasement policy towards Ankara could be ending.

Since the brutal unification of Italy in the late 1800’s, Rome has always pursued a policy of expansionism and self-interest in an attempt to replicate the French and British Empires despite not having the military or industrial capabilities to do so. This saw Italy on Germany’s side in both World Wars and engage in actions that itself cannot defend unilaterally, such as its vision to dominate Libya.

Draghi visited Tripoli on Tuesday and met his Libyan and Greek counterparts, Abdul Hamid Dbeibeh and Kyriakos Mitsotakis respectively. The aim of the trip was to strengthen ties with the North African country after Italy not only enabled Turkish influence to penetrate into Libya, but then itself became sidelined and irrelevant in what can be described as another “own goal” in Rome’s foreign policy.

The biggest issue in Rome’s foreign policy is that it is guided by the interests of Italian multinational oil and gas company, ENI. In fact, ENI’s influence does not only penetrate into Italy’s foreign policy, but also the European Union’s.

Nathalie Tocci is a special adviser to the High Representative [Foreign Minister] of the European Union Josep Borrell, director of the Rome-based Istituto Affari Internazionali, and sits on two ENI committees and chairs one. Tocci also had a scholarship funded by the Foreign Policy Institute in Ankara. Being on the ENI board and serving as a special adviser to Borrell, she accused Athens of engaging in “macho politics” against Ankara and defends Turkey so much so that she used her influence to denounce France to the German Council on Foreign Relations by saying “Look at Russia, Armenia and Azerbaijan, East Mediterranean and Libya – in what way has France helped a European consensus rather than exacerbated a European divide?” Of course, she omitted that French President Emmanuel Macron has emerged as the only major European leader to confront the Turkish aggression she defends.

Professor Michaël Tanchum, in writing for the Real Instituto Elcano in September last year, said that ENI, as Italy’s largest company by revenue, “has shaped the parameters of Italy’s foreign policy orientation” and “Italy’s imperative to secure ENI’s considerable assets [in Libya] has left Rome deeply ambivalent over Turkey’s deepening military presence in the country.”

However, it appears that perhaps Italy’s foreign policy regarding Libya is changing. Whereas Rome cynically worked against French-Emirati-Egyptian-Greek efforts to expel Turkey from Libya and continues to have ENI board members vehemently defend Turkish aggression, Draghi’s labelling of Erdoğan as a “dictator” suggests that Italy’s posturing is once again changing after failing to secure any significant influence in the North African country.

Although Mitsotakis visited Tripoli on the same day as Draghi and met his Italian counterpart whilst there, the Greek Prime Minister was formally invited to visit Libya by Dbeibeh. Draghi however “picked,” as Bloomberg described it, to visit the North African country as his first international trip since becoming Prime Minister. This suggests that the interim Libyan government does not view Italy to the elevated status that Rome places itself on but rather a neighboring maritime European country that it must deal with. This is unlike other neighbors, such as Greece and Egypt, that it formally invites to visit.

With Libya due to hold elections in December, two factions are emerging – a pro-Turkish one, and a pro-Egyptian/Emirati/French/Greek faction. Italy, who worked against the latter faction but was ultimately discarded by the former, is now left on the wayside with no influence in Libya despite major oil and gas interests. As has become common in Italy’s attempts to project its power even greater than its actual capabilities, it has failed. By labelling Erdoğan as a “dictator,” Draghi could be pivoting Rome towards the anti-Turkish bloc in Libya or once again try an independent path that will fail. At the very minimum, Italy appears to no longer hinge its plans to project its influence into Libya alongside Turkey. Instead, Italy may have to “switch sides” as it has embarrassingly already done on several occasions in Libya over the past decade.
Source