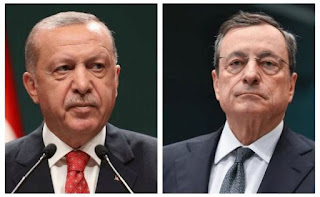 Mario Draghi's recent statements against Recep Tayyip Erdogan, calling him a "dictator" have been a topic of debate all over the world, especially considering the cooperative relations between both countries in North African geopolitics and the constant Italian effort to prevent EU’s sanctions against Turkey. At first, it was speculated that Italy would be changing its orientation towards Turkey due to some reform in its foreign policy, however, perhaps the initiative to structurally change the ties between the two countries may be Ankara’s.

In response to the Italian minister's aggressive words, Erdogan commented that "by making this statement, the man called Draghi has unfortunately brought down the ax on our relationship right at a time we hoped Turkish-Italian relations would reach a good place".

These words by Erdogan lead us to some interesting speculations, considering the current relations between Turkey and Italy. About 50 large Italian companies currently operate on Turkish soil, totaling a large amount of capital per year. In 2020, bilateral relations amounted to around 15 billion euros, being an important economic pillar in the midst of the crisis generated by the pandemic of the new coronavirus.

In addition, Turkey is one of the most important markets for the Italian military industry. Weapons, bombs, torpedoes, missiles, helicopters, among others, are products that move a large amount of capital in the relations between both countries. Between 2013 and 2019 Italian exports of ammunition to the Ottoman country exceeded 1 billion euros. It is important to emphasize that such military cooperation was not interrupted even in the worst moments of diplomatic crisis. For example, in October 2019, when the Turks launched an offensive against Kurdish militias in Syria, Italian Foreign Minister Luigi Di Maio announced that he would block arms exports to Turkey. However, his statements had no effect and exports not only continued, but increased, with Italy becoming the largest supplier of arms to Turkey at the end of that year, generating a capital volume of almost 340 million euros. This trade remained active in 2020, which contributed to the Italian economy during the pandemic.

On the other hand, despite the good economic scenario, the situation has changed with regard to geopolitical plans. Although both countries support the same side in the Libyan conflict, tensions have gradually escalated. This is due to the fact that Turkey supports the Government of National Accord (GNA) much more strongly than the Italians. Rome is interested in regaining its influence in Libya, resuming ties that have broken since colonial times. Italian companies have interests in Libyan oil and establishing a policy of exploration of the African country requires forming a strong and solid government in the region, preventing chaos and war - this is the reason why Italy supports the GNA. In contrast, the Turks have much stronger ties to the GNA, as they include Libya not only in an economic exploration plan, but in a new geostrategic structure that integrates Erdogan's neo-Ottoman plans for the Mediterranean.

In November 2019, Turkey and Libya signed an agreement on the delimitation of exclusive economic zones in the Eastern Mediterranean. The two signatories shared maritime territories that are claimed by Greece and Egypt, which led to the document being considered illegitimate by Italy and the rest of the EU. The same agreement also established broad military cooperation between Libyans and Turks, stating in one of its clauses that at any time the GNA could request military support from Ankara. This happened subsequently, in 2020, when Turkey sent mercenaries and weapons to help the GNA fight the troops of the Libyan National Army (LNA).

This point of military cooperation is important to highlight, since, at the same time that the Libyans requested Turkish support, Rome could have offered aid to the GNA, but it did not so, limiting to giving strictly verbal and moral support to the government, without direct involvement in combats. This shows that, although Tripoli is interested in negotiating with Rome, mainly in the economic sphere, the partnership with the Italians does not seem as profitable as the cooperation with Ankara. Italy provides verbal support and economic cooperation, while Turkey offers active military and economic assistance.

So, we have a complex scenario with the following factors: Draghi criticized Erdogan but was motivated by a reason unrelated to the relations between the two countries – which was Erdogan's offense to the European Commission President Ursula von der Leyen; Erdogan announced that Draghi's words will break relations between both countries.

Erdogan undoubtedly did wrong with the entire EU, not only with von der Leyen, in treating her rudely, and that is part of the aggressive and unyielding stance of the Turkish leader. Also, the European desire to cooperate economically with Turkey is growing, which can be hindered by Erdogan's words and behavior.

Finally, for the situation to be resolved without prejudice on either side, the best that can happen is a public retraction of Erdogan and Draghi mutually, which is unlikely. Erdogan would not be so rude to von der Leyen or threaten to cut ties with Italy just by chance, not having some hidden intentions in relation to the EU and, particularly, Italy.
Source