EU wants to cooperate with Turkey in economically 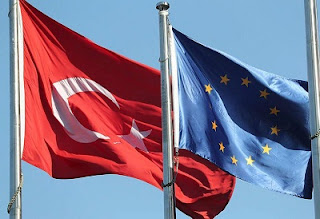 Despite various tensions and antagonistic interests, Turkey and the European Union have been approaching recently. The distinct projects between European states are a decisive factor in this process of rapprochement, because, while some countries have an open rivalry against Ankara, other European nations have more fraternal or neutral ties and are not willing to adopt an aggressive stance against the Turks and harm their own interests with that. Erdogan has been efficient in exploiting these internal differences in Europe in search of the best scenario for his country's interests.

Last week, a virtual meeting was held between European heads of state, which had been scheduled since December, with the aim of discussing and deciding the sanctions that would be applied to Turkey due to its activities in Greece. The main nation to encourage severe measures against Ankara is France, which provides Greece with broad logistical and military support in disputes against Turkey. But this opposition to the Turks is still controversial among other European countries, such as Germany, Italy, and Spain, which demanded a more neutral stance from Brussels during the conference.

Finally, the bloc's decision was exactly a point of absolute neutrality, advocating a progressive, but reversible, cooperation. In other words, the bloc will not interfere in regional disputes and rivalry and will adopt a policy of cooperation and resumption of fraternal ties, provided that certain specific conditions are met. If these conditions are not observed, sanctions can be taken at any time.

The two central conditions for Turkish-European cooperation are: Ankara undertaking to prevent or diminish the arrival of immigrants to the continent by its route of passage and; Europe is committed to speeding up the customs union with the Turks. In addition, it is expected to renew all existing economic cooperation agreements and strengthen ties for a future of progressive reconciliation.

However, for the terms of the cooperation to be fulfilled, some points must be clarified. In 2016, Ankara and Brussels signed an agreement to decrease the entry of immigrants into Europe via the Turkish route. The agreement provided for European economic aid for Turkey to keep displaced persons from the Syrian war on its territory. Turkey has since protected 3 million immigrants and prevented them from entering European soil, but Erdogan claims that financial aid has never been provided.

In response, Europeans claim that Turkey has facilitated the entry of several immigrants. In addition, recently, data from French intelligence revealed that there is concrete evidence of ties between the Turkish government and Islamic communities on European soil. These communities have created several problems for promoting separatism and disobedience to secular laws - something that Macron has been fighting in France, which is one of the reasons why Paris is so opposed to any form of cooperation with Ankara.

Indeed, there is no "right" or "wrong" side to this dispute. Europe has been negligent in complying with its agreements and Erdogan, committed to a neo-Ottoman geopolitical project, tries to gain space within European soil, using several tactics for this: open military opposition (as in the Greek case), sabotage and the fostering illegal activities (influencing radical Islamist communities) and diplomatic measures (with the eternal Turkish insistence on joining the EU). When some Turkish states demand a policy of cooperation with Ankara, they certainly do so considering all these factors. Europeans have not suddenly ignored the existence of a Turkish threat to the bloc's security.

What is happening is a mere search for economic measures of mutual benefit without effective political changes for either side. Both sides have strong commercial potential, especially in the agricultural sector, and this is something that is welcome in times of crisis. Europe remains the main investor in Turkish soil, despite so many political and ideological disagreements. Both the EU and Turkey are going through a difficult economic time and the possibilities for mutual aid in the economic sphere bring a horizon of good expectations - which will not necessarily imply any political change.

Ankara is immutable in its position of not allowing foreign interference in internal affairs. The Turkish government recently outlawed a left-wing party and canceled its commitment to an international agreement in favor of women's rights. These policies seem “barbaric” to Europeans, but if the EU really wants to cooperate with Turks, it will have to ignore these topics. In fact, the reason why Macron is so opposed to a customs union agreement is simply his incompatibility with Erdogan regarding their geopolitical projects. Except for France, the other European nations do not have great geopolitical ambitions, wanting only economic benefits and the progress of the Union as a whole. So, at this point, Macron is alone.

Obviously, the impacts of a Turkish-European agreement on global geopolitics can be many, but it will depend on what will be the attitude of the European nations that oppose Erdogan (France, Greece, and Cyprus). Paris could interpret the agreement as an outrage and distance itself from the bloc, taking measures without approval from Brussels, which would generate an internal crisis in Europe. But, as far as the direct link between the EU and Turkey is concerned, the apparent changes will not be many: the EU will continue to refuse to pay the expenses with immigrants; Turkey will continue to infiltrate immigrants and agents in Europe; however, both will have economic agreements.
Source