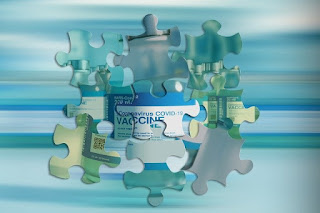 (The Guardian) - Further cases of a rare blood clotting syndrome including seven deaths have been reported among recipients of the Oxford/AstraZeneca jab in the UK, although experts say the numbers remain low and the benefits of the vaccine far outweigh any risks.

The Medicines and Healthcare products Regulatory Agency (MHRA) runs a “yellow card” scheme to pick up suspected side-effects or other concerns for medicines and medical devices.

According to the latest figures from the MHRA, there have been 22 reports of a blood clot in the brain called cerebral venous sinus thrombosis (CVST) that was accompanied by a low platelet count as well as eight reports of other blood clotting problems with low platelets, among recipients of the Oxford/AstraZeneca jab up to and including 24 March. Platelets are fragments in the blood that help it to clot. Of these 30 reports, the MHRA told the Guardian seven people had died.

However, such cases remain rare: the MHRA notes that by 24 March, 18.1m doses of the Covid-19 Oxford vaccine had been given.

There have also been two cases of CVST among people who received the Pfizer/BioNTech jab, neither of them accompanied by a low platelet count.

Concerns over rare blood clotting events have dogged the Oxford jab in recent weeks. The MHRA and the European Medicines Agency (EMA) have said it has not been proven that the events were caused by the jab, and the benefits of vaccination far outweigh the risks, given the danger posed by Covid. But the EMA said a warning about such events would be included in the vaccine information while investigations continued.

The EMA says it has looked into 14 deaths reported by 22 March related to unusual blood clots in recipients of the jab, although not all of these were associated with CVST.

While many countries have resumed use of the vaccine after pausing their programmes, others have remained nervous. Among them, Canada has suspended use of the jab for people under the age of 55, while Germany has suspended routine use of the jab in the under-60s. The latter has noted 31 cases of CVST after giving 2.7m doses of the Oxford/AstraZeneca vaccine, 19 of which were associated with low platelets, and nine deaths.

Estimates of CVST in an unvaccinated population vary, but it is rare, with upper estimates of 15 to 16 cases per million people per year.

At present, most of these rare clotting events appear to be occurring in women under the age of 65 – but quite why this is remains unclear.

Some have said CVST is more common in this group in general, while others have noted that countries such as Germany were initially reluctant to approve the Oxford/AstraZeneca jab for older people, meaning most of the recipients were younger people, primarily healthcare workers and teachers – the majority of whom are women. This may also explain the apparent disparities between Germany and the UK, as the latter approved the jab for older people from the off.

According to an expert haematology panel whose guidance is being cited by the British Society for Haematology, blood clots with low platelets after coronavirus vaccination have been highlighted as affecting patients of all ages and both genders. The syndrome of blood clots and low platelets appears to be similar to a condition sometimes seen in patients who have been given the blood-thinner heparin, they add.

Dr June Raine, the MHRA’s chief executive, said the agency was continuing to conduct a thorough review of the reports, but vaccinations would continue.

“The benefits of Covid-19 vaccine AstraZeneca in preventing Covid-19 infection and its complications continue to outweigh any risks and the public should continue to get their vaccine when invited to do so,” she said. “We are asking healthcare professionals to report any cases they suspect to be linked with Covid-19 vaccination via the coronavirus Yellow Card website.”

Paul Hunter, a professor in medicine at the University of East Anglia, said the new figures increased concerns about a possible causal link between the Oxford jab and CVST, but stressed that such events remained very rare.

“Risk of death is still much, much greater in people who are unvaccinated than in people who have had the [Oxford] vaccine,” he said. “It would not put me off my next dose.”

This article was updated on 3 April 2021 to add information about the estimated rate of CVST in an unvaccinated population.
Source