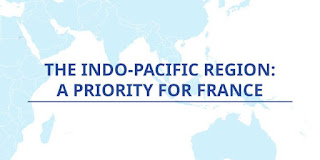 On Tuesday, India and France discussed exploring ways to enhance cooperation in the Indo-Pacific by means of a trilateral mechanism with Australia. Be it exercises, military presence or diplomacy, France is a very important actor in the Indo-Pacific Region (IPR). For instance, starting on April 5, France hold the three-day Le Pérouse naval exercise in the Bay of Bengal. It brought together the QUAD countries navies (Australia, India, US, and Japan) alongside the French. There has been some talk about a “Quad-plus”. Should France join the QUAD, it could perhaps inspire other countries (such as Vietnam and Indonesia) to follow its move.
France has been seeking to improve defence ties with both Indonesia and India. French geopolitical interest in the region also partly comes from the fact that France (or rather its territory French New Caledonia) and Australia are maritime neighbors. It should be noted however that last week Paris granted New Caledonia a third (and final?) referendum on independence. This matter has been polarising the country and there have been amid a pro-Chinese party and a French loyalist one.

So, Paris' presence and interests in the Indo-Pacific is well established. Furthermore, in the IPR, France is also aligned with American interests in its recent hostilities against China in the South China sea, where Paris sent warships and a nuclear attack submarine to conduct a patrol in February. This is a critical route for global trade (where the Indian and the Pacific Ocean merge) and Beijing claims almost the entirety of it, against the interests of India and the QUAD countries. Last month a French frigate docked at the Cam Ranh Port in Vietnam.

France of course remains a global player - perhaps Europe's last one as Adrian Treacher controversially called it in his famous "French Interventionism" book published over 15 years ago (Germany and the UK would disagree). France is very much engaged in the Sahel and will not withdraw for now (in this case too cooperating with the US), even though many now call Mali the French Afghanistan. Paris also has its own interests in Lebanon and Syria.

However, France is increasingly clashing with the US and NATO in a number of issues. Today, Paris watches very closely every move the Turkish authorities make. And France has supported Greece against Turkey and against all odds, one might add - considering that NATO and the EU countries often appease Turkey. Having at least twice described NATO as “brain dead” (which prompted some to compare his views to those of De Gaulle in 2019), Paris is dead serious in its intent to contain Turkish ambition in the East Mediterranean, as it even sent its Charles de Gualle nuclear aircraft carrier to sail the Greek waters Turkey claims - thus changing the power balance in the Mediterranean.

So, France clashes with American interest in a number of issues, especially those involving Greece and Turkey. Paris and Moscow, on the other hand, have been increasing their strategic cooperation precisely around those very issues as was visible last year during the events leading to the Russian-French meeting in Paris for the Cooperation Council on Security issues. This is so even though Moscow, in its turn, is not very much willing to openly confront Ankara despite increasing tensions between Russia and Turkey.

Macron and Putin interact frequently (while the relations between Russia and most of the major Western countries have been at a low point) and although it has sometimes been described as a love-hate relation historically, Moscow and Paris in fact still have a special relationship. For example, considering that France is a NATO country, the anti-terrorist Russian-French bombing cooperation that took place against their common enemy ISIS in 2015 was unprecedented (when Hollande was the French president). This relationship however could be put to test again today over the issue of Donbass. Be it as it may, Macron himself is not really anti-Russian: when he was the French Minister of Economy, he in fact advocated that sanctions against Russia should be lifted

France's situation in a way reminds that of India: it is aligned with the US and NATO in the IPR. Unlike India, France does not share a border with China and has no territory disputes with it. Washington, in its turn, wants France to be a kind of bridge partner between the US and Europe to counter both China and Russia. But, like, India, France too has been enhancing its relationship with Russia and has a lot to gain from it.

The fact is that India never had a “NATO mentality” (as India’s Minister of External Affairs S. Jaishankar remarked on Wednesday). And neither does France - one can recall De Gaulle 1966 decision to pull France out of NATO for good (it only returned to full participation in 2009). So, for the QUAD or a “Quad plus” to become a “small NATO” or a “new NATO” as many worry - which would be a dangerous scenario - there is still a long way to go. Macron is of course not De Gaulle, but he has shown the world - or rather reminded it - that in some cases France can go against the grain of NATO policy to pursue its own interests.
By Uriel Araujo, researcher with a focus on international and ethnic conflicts.
Source