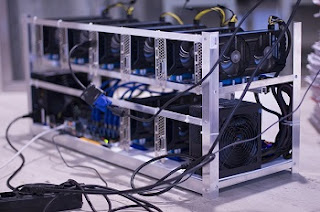 It emerged recently that Bitcoin’s annual energy consumption currently matches that of a mid-sized country, with Argentina given as an example.

Garlinghouse said Bitcoin’s proof-of-work consensus model ensures the problem will get worse as the network grows. This is because rising price correlates positively with energy consumption, as more miners join the network to take advantage.

“As the price of Bitcoin goes up the energy consumption and the carbon footprint of a proof-of-work, that mining that happens to validate the transactions, that continues to scale aggressively also. And we can’t lose sight that one Bitcoin transaction is about the equivalent of 75 gallons of gasoline being burned.”

Charles Hoskinson, the CEO of IOHK, said the amount of energy used by the BTC network has gone up more than four times since the peak of the last bull market.

“Bitcoin’s energy consumption has more than quadrupled since the beginning of its last peak in 2017 and it is set to get worse because energy inefficiency is built into bitcoin’s DNA.”

There are no easy answers to this issue. But Garlinghouse suggested users switch to more energy-efficient platforms, such as Ripple and XRP, especially for payment transactions.

“We at Ripple use the XRP Ledger because it’s extremely fast and it’s about one hundred thousand times more energy-efficient than Bitcoin. In that context, it works really well for payments…”

At the same time, Bitcoin advocates say high energy consumption is not a valid argument as most of the energy comes from renewable sources.
Head of Research at CoinShares Christopher Bendiksen states that Bitcoin mining is a mobile affair drawn to unwanted and cheap energy sources. He claims the majority source comes from otherwise underutilized renewables.

“Bitcoin mining is extremely competitive, but even more importantly, mobile, and therefore tends to cluster around the unwanted (read: cheapest) energy sources of the world. These sources happen to be largely composed of stranded or otherwise underutilised renewables, particularly hydro power.”

What’s more, Bendiksen goes as far as to say the electricity cost is worth it for what we get in return – a global apolitical monetary system. Rather than condemn Bitcoin’s energy usage, he argues that Bitcoin mining has an important role to play in improving the renewable grid architecture.
Source