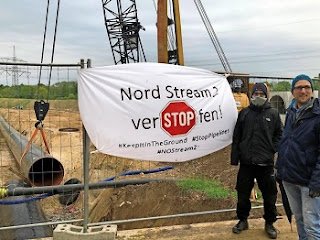 The German environmental organization Environmental Action Germany ("DUH" in the German acronym) recently filed a lawsuit in the Hamburg administrative court contesting the validity of the judicial authorization previously granted for the construction of the gas pipeline. The organization claims that the project violates environmental standards, although little concrete evidence is provided to corroborate this thesis, which leads us to believe that such organization - like many others in the world - is being co-opted to serve international agents interested in the end of the project.

Previously, DUH had already made other attempts to prevent the construction of the pipeline. For two years, the organization has been claiming that the project has strong environmental impacts, which make its construction unfeasible, but such claims remain devoid of reliable scientific studies. In February, the group issued a report on Nord Stream 2's alleged irregularities, putting pressure on the Bundestag to take action against the project. Also, this is not the first time that the NGO has tried to judicialize its opposition to the project: in 2020, DUH filed a lawsuit with a court in Greifswald trying to stop the pipeline due to its potential greenhouse gas emissions, which was ignored by the court.

In addition to the lawsuits, the NGO also tries to challenge the authorization for the construction of the gas pipeline directly with the German Federal Maritime and Hydrographic Agency, which is responsible for regulating activities on the German waters. In a recent statement, DUH stated that the construction of the pipeline would have an impact on the nesting period for local birds and should be stopped by the end of May. However, there is still not enough data to state what the impact on the nesting of birds would be after the conclusion of the works, which is why the demand remains unanswered.

Contrary to what DUH claims, however, Nord Stream 2 is generally considered to be a project consistent with European environmental standards and with little impact on the local ecosystem. In fact, whatever the impact of the gas pipeline, it will certainly be less than the ecological harms of the current energy system, which has a much longer route, much higher costs, and much more disastrous effects on the environment - which is ignored by the NGO. It is important to note that, despite any side effects, once completed, the new pipeline will be able to pump up to 55 billion cubic meters of natural gas from Russia to northeastern Germany, doubling the capacity of the existing Nord Stream network - therefore, the production will be maximized, and environmental and financial costs minimized.

When, in February, the DUH issued a report to the Bundestag demanding the end of the works, in addition to environmental criticism, the NGO stated in its document that Vice Chancellor and Finance Minister Olaf Scholz had offered to invest a billion euros in infrastructure works of interest to the US if, on the other hand, Washington canceled sanctions on Berlin due to the gas pipeline. The case would demonstrate the dimensions of German interest in the pipeline; however, it would be an irregular attitude towards German rules. Scholz was questioned about such charges, which were denied. In addition, the lack of evidence has deeply irritated the German government. The Minister of Foreign Affairs, Heiko Maas, called the attitude of the DUH - supported by the German Green Party - a "hypocritical spectacle". The report was then invalidated.

Other environmental criticisms have been made to the pipeline periodically. In some moments, the emission of greenhouse gases is emphasized, in others, the focus is the impact on local biodiversity. The important thing, for the NGO, is simply to maintain a focus of attention on the project, to generate antipathy in public opinion and to pressure the government to take more radical decisions about the case. Recently, former Chancellor Gerhard Schroeder made public statements to the German media responding DUH’s criticisms, stating that, in addition to being cheaper, Russian gas, unlike American gas, is not derived from hydraulic fracturing, which would make it environmentally correct in European standards, in addition to ensuring enormous energy security. In the end, DUH's reports prove to be absolutely unfounded and should not be taken as attitudes committed to the environment, but simply as political acts in support of Washington, in order to guarantee its interests on German soil.

DUH is just one more example of what we call "green capitalism": the project for a re-design of the capitalist system of production based on a pseudo-ecological principle. The US wants to sell gas to Germany, regain its influence in Europe and harm Russia in every way possible, but it cannot openly state this, so it uses environmental arguments and are supported by NGOs, green parties, independent activists, and various organizations that are co-opted in favor of world powers and multinational corporations.
By Lucas Leiroz, research fellow in international law at the Federal University of Rio de Janeiro.
Source