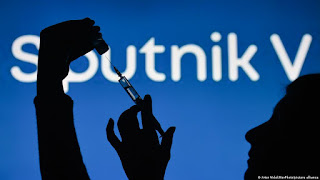 A new diplomatic tension is emerging in Europe due to the German attitude of negotiating with Moscow the acquisition of doses of the Russian Sputnik V vaccine - something that goes against the interests of the European bloc, which has its own vaccination program, in which the Russian vaccine does not occupy a relevant role. Berlin's position demonstrates the willingness of the German government to place its national interests above European plans and once again generates discussions about the limit of the sovereignty of States in the European Union.

Continuing a long process of rapprochement, Germany is about to raise its bilateral relations with Russia to medical diplomacy. On Thursday, April 8, Berlin officially announced its plans to buy the Sputnik V vaccine. To confirm a possible final deal, Moscow is expected to provide some data to the European Medicines Agency (EMA), which is expected to occur soon. Currently, EMA is evaluating data that has already been received and, so far, no incompatibility with European medical standards has been detected. However, the European Commission insists on a hostile stance on Russia. Brussels informed health ministries in all European countries that vaccine negotiations with Russia are not in the bloc's plans, and there is no possibility of a preliminary contract.

German health minister Jens Spahn, despite European advises, announced negotiations on a preliminary contract between his country and Russia, which was received with criticism and disapproval by the Commission. In fact, Germany is just following the European protocol and purchasing vaccines in advance as a way to make time in the race against the virus. The other European countries did the same with the other vaccine suppliers, with restrictions only on Russia, which is considered unreasonable by the Germans, who plan to buy 2.5 million doses of Sputnik V even before the official results of the tests are released by EMA.

The special protocol for Russians raises questions about the legitimacy of European standards, as there are apparently political factors influencing the way the Commission deals with medical and health issues. Spahn had previously warned the Commission about the lack of vaccine supplies in Europe - a situation that will become unsustainable in the short term, considering the destructive potential of the third wave of the pandemic. His warning, however, was ignored by the Commission, which is slow to elaborate a comprehensive immunization plan. So, what Berlin is doing now is simply guaranteeing its national interests despite the European Commission's politically engaged plans.

The situation of the pandemic in Germany is really worrying and the absence of a solid vaccination project raises even more doubts about health security in the short and medium term. For five months the country has faced severe restrictions on the circulation of people, with lockdown in some regions and milder measures in others. Restrictions are necessary to contain the advance of the pandemic in a strategic period, before reaching the peak of infection, however, if such measures are prolonged, a country's economy may collapse, considering the huge commercial impact of the lockdown. The only way to abolish restrictive measures is through collective immunization, which is still in its first phase in Germany: of the 83 million German citizens, only 4 million have already received the second dose of the vaccine. The government's rush to buy Russian vaccines is a public need - this is the only way to prevent a major health, social and financial crisis in the country.

Germany is changing its course and shaping a destination different from that towards which Europa is heading. Despite its economic and diplomatic strength, the European Union simply cannot win the pandemic because it remains tied to ideological and political issues that prevent it from creating a comprehensive vaccination program based on purely strategic concepts. Pfizer-BioNtech, Moderna and Astrazeneca vaccines are currently applied in the EU. The first deliveries of Janssen, Johnson & Johnson, are scheduled from April 19. Two other contracts were signed, one with the German Curevac and other with the French Sanofi, but these producers have not yet requested authorization to use the EMA. In total, EU spending on vaccines exceeds 2 billion euros, precisely because the choice so far has been made in favor of the most expensive vaccines, both for purchase and for maintenance. And the results of this are inefficient: so far, only 6% of the European population has received the second dose of the vaccine.

The European problem would be easily solved with the large purchase of Russian and Chinese vaccines, which have more viable values, simpler maintenance, and faster production system, as well as high efficiency in the results. Berlin is making the decision to buy Russian vaccines in an absolutely sovereign way, prioritizing the well-being of its people above the political interests of the EU. This will certainly generate sanctions and notes of disapproval not only from other European nations, but also from the American government, which is expected to comment on the case soon. However, ensuring the rapid immunization of its population is a right of the German government - and cannot be taken away from it.
By Lucas Leiroz, research fellow in international law at the Federal University of Rio de Janeiro.
Source