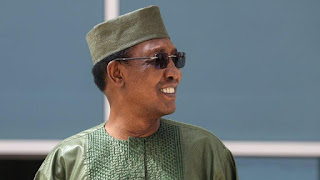 Terrorism continues to advance in Africa. This time, the president of Chad, Idriss Déby, was the target of terrorist militias, being assassinated on Wednesday during fighting against rebel groups on the border with Libya. This case is further evidence of the advanced stage of terrorist groups in Africa: the victims include great political leaders, not just peasants, soldiers, and civilians. This leads us to question all the mechanisms that are currently being used to try to stop the spread of terrorism on the African continent - and to speculate on what still needs to be done.

Idriss Déby Itno was 68 years old and has governed Chad since 1990. The president, who also commanded the armed forces, resolved to face terrorists who threatened to seize the country's territories on the northern border with Libya, alongside his troops. In a statement to the media, the military, commanded by General Azem Bermandoa Agouna, said that Déby died "defending territorial integrity on the battlefield" in fighting rebels, although the details of the death have not yet been clarified. The people of Chad reacted to the death of the leader with emotion, considering him a true hero for having died on the battlefield.

Déby had recently been elected to a new presidential term. His team had already officially announced that the president planned to command troops against the rebels on the frontline, showing his solidarity with the military. The fighting on the border with Libya has become increasingly frequent and deadly. The rebel insurgents defend the alternation of power in Chad, but have links with the terrorist group Boko Haram, which is linked to ISIS and Al Qaeda. Terrorists invade Chad's territory mainly from Libya, where several terrorist organizations have gained space, power, and influence since the fall of Muammar al-Gaddafi. However, there are also invasions across the border with Nigeria, where Boko Haram is most active.

The biggest fear of Déby and the entire population of Chad is that the advance of the terrorists towards the capital, Ndjamena, would be so strong that it cannot be stopped. The president chose to die fighting against this tragic scenario. Now, Déby is temporarily replaced by his son, Mahamat Kaka, appointed by a council of military leaders to run the country until new elections take place. Having to continue his father's legacy, Kaka will have the greatest challenge to stop the spread of terrorism and prevent the country from being taken over by illegal militias.

Internationally, the commotion over Déby's death has been numerous. The leader was universally considered to be a great ally against terrorism in Africa, despite having already received several criticisms for having a stance not very consistent with the Western model of democracy. Several political leaders around the world sent their condolences to the people of Chad. However, a precise note must be made: Deby's death reveals, once again, the structural weakness in the current mechanisms to combat terrorism on the African continent.

It would not be an exaggeration to say that what is happening in Chad is a late consequence of Western interventionism in Libya. If the Libyan state had not been wiped out in a civil war supported and financed by Western powers interested in the fall of Gaddafi, this country would not have become a strategic base for terrorist organizations. Now, those organizations invade border nations in search of more territory, natural resources, and influence.

Chad is a strategic target for terrorists, as well as an oil-rich territory, in addition to having an extremely fragile national structure, with a very weak economy and means of communication, which make it easier for terrorist groups to act violently without international attention. Terrorists currently invest heavily in Chad, mainly through alliances with rebel militias unhappy with the Déby’s management.

However, Libya is not the only point of origin for terrorists and the case should not be seen in isolation. The phenomenon of terrorism in Africa is growing and really disturbing. This continent has simply been abandoned by the West. For decades, the West has been concerned with silencing terrorists in Africa in order to maintain its colonial ties and exploitation, but now it prefers that terrorist activities are restricted to that space, in a context where Europe itself is a victim of terrorism more and more frequently.

Alone, Africa cannot prevent the catastrophe of the rise of a major caliphate in its countries. African governments lack the structure and strength to fight terrorist militias. Only a new international alliance can stop terrorism on the African continent - but the West does not want to be involved in any such alliance.
By Lucas Leiroz, research fellow in international law at the Federal University of Rio de Janeiro.
Source