In the aftermath of the Biden-Suga summit, Tokyo-Beijing relations are at the lowest point in decades 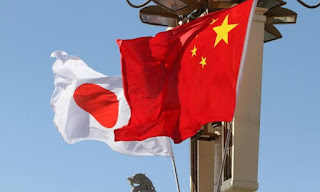 On Monday, a record number of Chinese jets entered Taiwan's air zone. This is happening in the lead-up to Taiwan's largest annual military exercises, which is to begin this week, simulating a full-scale Chinese "invasion". This is also taking place a few days after the Biden-Suga summit.

US President Joe Biden and the Prime Minister of Japan Yoshihide Suga met at the White House last Friday and launched a new Competitiveness and Resilience (CoRe) Partnership. This marks a very aggressive stance on China regarding 5G and 6G technology, and Taiwan.

Both leaders agreed to co-develop a number of key technologies - and that includes, among other things, developing partnerships between Japanese and American research institutions pertaining to quantum information technology; civil space cooperation; launching a Global Digital Connectivity Partnership to promote cybersecurity capacity for their partners; and also investing $4.5 billion in the so-called 6G or Beyond 5G mobile networks to enhance competitiveness in the digital field.

In the post-Covid world, the importance of high-speed communication infrastructures has become a key topic, and technologically China is still clearly a leader in 5G.

5G networks are just becoming commercially available now, but China has already launched the world’s first 6G test satellite into orbit last year, in November. 6G is so strategic because it opens the way for a world way beyond the Internet of Things (IoT); it could allow for hologram calls, computer-brain interfaces, and computer models to predict scenarios - with a number of applications in the industrial, medical, and the military fields.

The US and Japan do not want to be behind. American and Japanese firms already collaborate to promote the new Open RAN (Open Radio Access Network), which provides network operators with an open-source layer - so that they don’t need to buy entire systems including antennas and base-stations. It generates performance benefits, including Artificial Intelligence (AI)-supervised load management.

Tokyo and Washington want to promote Open RAN among developing countries, to counter Chinese economic influence. They also plan to expand such cooperation to other countries, especially the QUAD members, thus combining issues of technological competition with security interests regarding the Indo-Pacific region. This must be understood in light of the US trade war with China, which has continued under Biden’s administration.

However, this is not an easy task. For example, India itself is not yet ready for 5G right now. And the race for 6G will take at least a decade - the truth is Western companies themselves can hardly compete with the Chinese model, that’s why teaming up is necessary. The fight for 6G dominance will be an increasingly tense race, including a competition in standards. For example, China defends a “New IP”, that is, a new protocol system, as proposed in September 2019 by the China Ministry of Industry and Information Technology, Huawei, China Unicom, and China Mobile at the TSAG (Telecommunication Standardization Advisory Group) meeting.

But what really infuriated Beijing was the fact that Both Biden and Suga called for "peace and stability" across the "Taiwan Strait", thus reaffirming their commitment to counter “Chinese intimidations” in the East and South China seas. Such a reference to Taiwan is happening for the first time in over 50 years - the last time was a 1969 US-Japan joint statement. This is a super-sensitive topic for Beijing and Tokyo could face economic retaliation. It was indeed Japan's first major political statement against China since Sino-Japanese bilateral relations were re-established in 1972, and this could mark the lowest point between these two countries ever since.

Moreover, the joint statement also reaffirmed US support for Japan’s claims regarding the Diaoyu island (also known as Senkaku islands) but China too claims such islands, which are uninhabited. A “free and open Indo-Pacific” was also discussed.

Plus, Japan agreed to increase its military capabilities and defence spending so as to broaden its cooperation with the US "in all domains" regarding regional security in Asia. The joint statement also emphasized the US defense of Japan, under the two countries' bilateral security treaty, employing "its full range of capabilities, including nuclear". All of this is of course aimed at North Korea and China.

Before the summit, Tokyo had already approved a record $51 billion defence budget for financial year 2021, which, among other things, is to cover the purchase of next-generation stealth fighter jets, warships, and enhanced missile systems. This is the ninth consecutive annual increase. With its current debt levels, it is unclear how Japan further increase its defence spending as its economy has been hit hard by the Covid-19 pandemic. But does such an increase in military spending pose a threat to Beijing at all? Not really, according to Xu Guangyu, a senior adviser to the China Arms Control and Disarmament Association.

China is still one of Japan's main partners, economically - it needs China. Because of the pandemic, the Japanese exports to the EU, the US and ASEAN actually fell by over 25 per cent (between April and September 2020) while exports to China increased 3.5 per cent. For Tokyo, economic interdependence with Beijing has been actually increasing. This means Japan will compete with China, but at the same time needs to cooperate with it somehow.

Tokyo has been under Washington’s sway for too long. Is it time for Japan to pursue its own strategic agenda regarding hot topics such as Taiwan and many others?
By Uriel Araujo, researcher with a focus on international and ethnic conflicts.
Source