India to Continue Buying Russian Weapons Despite US Sanction Threats 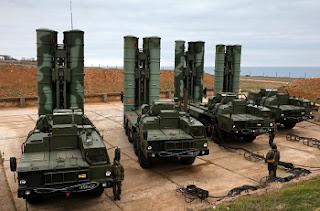 Sergey Lavrov, the Russian Foreign Minister, arrived in India this Monday to discuss several geopolitical matters, including important deals, such as the P-75i submarine project and also the AK-203 rifle’s local production in Uttar Pradesh’s Amethi. Other topics of discussion were the Indian stance on the Afghan peace talks with the Taliban and also the forthcoming BRICS summit. The upcoming India-Russia annual summit was also discussed - Indian growing ties with QUAD is a concern for Moscow. The purchase of the S-400 air-defence missile system was expected to be discussed but Indian External Affairs Minister Subrahmanyam Jaishankar stated this shall be discussed at a defense ministers meeting sometime later this year.

US Secretary of Defense Lloyd Austin recently raised the issue of the S-400 systems in his first visit to India during a meeting with the Indian Defence Minister Rajnath Singh. The US has been threatening New Delhi with sanctions. In late March, Indian senior Bharatiya Janata Party (BJP) ideologue Subramanian Swamy tweeted that purchasing the S400 system will result in India being "expelled" from QUAD by the US. This was an amazing statement. Could this be so?

Last year, in November, India and the US did sign a game-changer defence deal. However, Indo-Russian relations go way deeper. Russian-Indian alignment started in the 1950s and rose tremendously over the past two decades. Both countries agree on multipolarity and multilateralism prevailing in the global world.

Washington has threatened New Delhi with sanctions more than once - invoking their Countering America’s Adversaries Through Sanctions Act (CAATSA) - a federal law that imposed sanctions on Russia, Iran, and North Korea. This piece of legislation was signed into law by then President Trump in 2017. Trump himself claimed he believed the Act had serious flaws but signed it nonetheless. It provides sanctions for activities pertaining to any transactions with the Russian intelligence and defence sectors. It is a federal law that can backfire and actually discourage some middle powers from enhancing their defence relationship with the US (to avoid compromising their autonomy).

The Modi government has stressed it has a diversified portfolio. New Delhi in fact has used Russian systems for years. Plus, India started the process to purchase the Russian system before the CAATSA was introduced. Nevertheless, the US keeps threatening their ally. In January the US imposed sanctions on Turkey over the buying of the same missile system from Russia. This apparently demonstrates that the US is willing to implement and reinforce CAATSA, some analysts argue.

For India, such a defence system update will be very welcome. Indian rivals and neighbors - China and Pakistan - have advanced fighter jets with long range missiles. The S-400 is the most advanced surface-to-air missile defence system globally: it can track and destroy spy planes, drones, missiles and could even intercept Chinese hypersonic ballistic missiles. Moreover, switching to a different system would certainly cause a kind of operational void - and this is not an option (even for just a few years). Such "void" in the Indian air space would jeopardize a strategic warfare domain and this would not even be in the US best interests regarding the Indo-Pacific region.

Besides, many other defence equipment items that India procures from Russia could invite American sanctions. And we are talking about a very strong level of Indo-Russian cooperation which comprises joint military exercises and some key agreements signed.

Be it nuclear submarines, fourth-generation aircrafts, cruise missiles, New Delhi has counted on Moscow over the years to arm its military. According to Daniel Kliman (a senior fellow of the Asia-Pacific Security Program at the Center for a New American Security), Russia is an essential partner for India because it has been showing willingness to share sensitive technology and has offered somewhat more relaxed standards for transfers in contrast to US guidelines on copyrights and classified technology. The truth is that India needs Russia and this will not change over the next several decades.

To sum it up, New Delhi cannot possibly cease to purchase defence systems and equipment from Moscow to comply with a quite bizarre American piece of legislation. If the US enforces such sanctions, it would have much to lose: Indian-US defence trade today is worth more than $20 billion.

The US has indeed "punished" Turkey (a NATO ally), but India is no Turkey. Its importance is far greater. Its geographical position in the Himalayas make it a kind of geopolitical pivot or even a "pivot of world peace", as defence analyst and retired Indian army officer Anil Kumar Lal describes it.

The American threats against India in all likelihood are an instance of rhetoric and bad diplomacy. So, India is likely to join China and Turkey in purchasing the Russian S-400 system.
Source