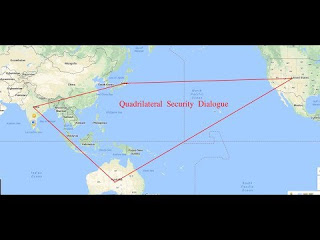 After Japanese Defense Minister Nobuo Kishi met with his Indonesian counterpart Prabowo Subianto earlier this week, he stated that their two countries agreed to expand defense cooperation and conduct joint military exercises in the South China Sea. The Indonesian Minister of Defense and Minister of Foreign Affairs visited Tokyo for bilateral talks with their Japanese counterparts. The meeting was part of Indonesia’s efforts to delicately balance its relations with all Indo-Pacific players, including China, the U.S. and Japan, in light of regional issues such as the demarcation of the South China Sea and the political crisis in Myanmar.

In October last year, Japan and Indonesia - both archipelago countries - held a naval exercise in Indonesia's Exclusive Economic Zone off Natuna to the west of Borneo island. Beijing and Jakarta are at odds over Indonesia’s Exclusive Economic Zone demarcation line in the South China Sea, so observers believe that holding a joint military exercise there could be a provocation against China. Japan emphasizes that it is developing military relations with its partners in Southeast Asia in response to China's increasingly assertive policy in the South China Sea.

Japan, the U.S, Australia and India are part of the Quadrilateral Security Dialogue (QUAD), one of the main regional mechanisms to halt Chinese dominance in the Indo-Pacific region. It is likely that Japan is attempting to draw Indonesia into QUAD so it can be part of an alliance aimed against China.

However, Indonesia is unlikely to participate in QUAD in the near future. Although Indonesia has major disagreement with China over maritime delimitations in the South China Sea, it is not to the extent that decisionmakers in Jakarta would jeopardize trade relations. If Indonesia were to join QUAD against China, it will undoubtedly lead to a negative backlash by Beijing and the disadvantages it will cause will certainly outweigh any advantage that is perceived.

Even Vietnam, which has centuries long animosity with China and more tense relations over the South China Sea, shows no intentions of joining QUAD. Besides the lack of interest from Vietnam, and likely from Indonesia too, QUAD members themselves, at this point in time, have not named any specific candidates to join their anti-China coalition.

Jakarta’s current policy is balancing its relations with Washington, New Delhi, Canberra, Tokyo and Beijing. Although its economy is reliant on Beijing, Indonesia has identified Japan as a country to boost military ties with since they too are a naval country that has maritime issues with China.

This has not stopped Indonesia from making moves that the U.S. would view as hostile. China as the world’s largest exporter, and Indonesia as Southeast Asia’s largest economy, agreed last September to promote the use of the Chinese Yuan and Indonesian Rupiah in trade and investment transactions between the two countries instead of the U.S. dollar. Currently, around 10% of Indonesia’s global trade uses Yuan and in 2018, the value of the Yuan reached $29 billion, or about 63% of the entire Indonesian market.

The Japan-Indonesia 2 + 2 meeting was not reduced to boosting military ties though. The ministerial meeting in Tokyo also reflected the different Japanese and Indonesian approaches to the situation in Myanmar. Since the Myanmar military came to power through a coup on February 1, the Foreign Ministers of Japan and Indonesia, Toshimitsu Motegi and Retno Marsudi, held two phone conversations about the issue.

After the meeting in Tokyo, the parties agreed to work closely to improve Myanmar's situation. The Japanese Foreign Minister welcomed the Association of Southeast Asian Nations (ASEAN) efforts in responding to the Myanmar crisis. According to Western news agencies, Motegi harshly criticized Myanmar's increased military repression of civilian protests. Meanwhile, there was no information about the response of the Indonesian Foreign Minister to these Japanese assessments, nor a statement against the Myanmar military government.

Indonesia, along with Singapore and Malaysia, led an ASEAN initiative to end the violence by pushing for a special summit that would allow dialogue with the Myanmar military. This is in stark contrast to Japan, the largest provider of economic assistance to Myanmar ($1.7 billion in 2019), who on Tuesday suspended new aid to the country and called for the release of President Win Myint and other detained members of the National League for Democracy, which decisively won last November's general election.

Although Japan and Indonesia have striking differences on how to handle the situation in Myanmar, it is unlikely that it will affect their bilateral relations as they prioritise and focus on naval cooperation and coordination. In this way, Indonesia is delicately balancing its relations with all major countries in the Indo-Pacific region.
Source