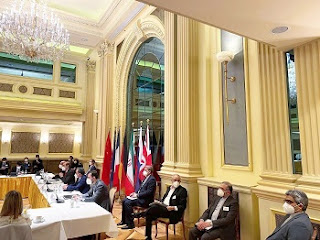 The Iranian negotiating team headed by Deputy Foreign Minister Seyed Abbas Araghchi left for Vienna on Monday to resume nuclear deal talks, Tehran Times reported.
The controversy surrounding Iran's nuclear policy continues to grow. Recently, Tehran decided to enrich uranium with 60% purity, increasing Western "concerns" about the possible production of nuclear weapons which requires 90%. The decision was generated mainly as a retaliatory measure to the explosion of an Iranian nuclear facility in Natanz, in what the country's authorities considered to be Israeli sabotage.

Obviously, the West has reacted negatively to the Iranian measure. Washington classified the act as "provocative" and European nations emphasized the fact that the initiative hampers negotiations for the resumption of the 2015 nuclear deal. However, all countries that criticized Iran have completely ignored the fact that Iran's allegations of sabotage have evidence and must be taken into account. Suspects involved in the blast have already been arrested and Iranian intelligence claims to have data that corroborates the possibility of sabotage.

Despite the diplomatic crisis, only the US has cut its involvement in the negotiations. With Washington's refusal to talk to Iranian officials, European nations took the initiative to mediate negotiations for the resumption of the agreement. French, German, and English diplomats endeavored to carry out the first round of negotiations, together with representatives from Russia and China, totaling the signatories of the agreement. Iranian diplomats complained about the European failure to condemn the attack on Natanz, saying that there was a "weak response" on the part of European countries. During the talks, Iranian representatives demonstrated a big interest in renewing the agreement, but, above all, they enthusiastically defended the interests of their country, showing that they were willing to reach an agreement only in case of veto of sanctions and condemnation of the attack in Natanz.

In fact, there is still a central obstacle: both sides have different priorities. Westerners demand that Iran reduce levels of uranium enrichment immediately, while Iran demands an end to all economic sanctions as a first step towards negotiations. Neither side seems willing to resign its position at this point. On the part of Iran, there is an interest in concluding the talks before the next Iranian elections, which will be held in June since it will guarantee a safer scenario for the next government. But as long as these two positions remain unchanged, there will be no progress. Tehran made it clear during the first round of negotiations that if sanctions are not suspended as soon as possible, the agreement will be definitively canceled.

Obviously, other international agents are involved in the negotiations of the agreement, albeit in an indirect way. Israel makes strong pressure against any form of dialogue with Tehran and demands a similar stance from the whole West. The UAE, although sharing the opposition to Iran, accept the possibility of negotiations, provided that the aim is to reach a "better" agreement than that of 2015, which means an agreement with even more restrictive sanctions on Tehran. The Arab powers in the Gulf are demanding to participate directly in the dialogues because they affirm that the Iranian issue is of their interest due to the geographical proximity.

Another factor is damaging Iran's image in the negotiations. Recently, an audio was released where it is supposedly possible to hear Minister Javad Zarif talking to Iranian economist Saeed Laylaz about the decision-making process in the Islamic republic, where Zarif says that in practice it is the military who are the main decision-makers in Iran, not the politicians. Tehran does not deny Zarif's authorship in relation to the audio, just stating that the conversation has been removed from its original context.

For Washington, the case serves as a justification for tightening sanctions and preventing any form of negotiation. In fact, Tehran is acting honestly by not denying military influence over the government and there is not necessarily anything wrong with the armed forces playing such an influential role. Though the leaders of the Islamic Republic have repeatedly stated that they will not build an atomic bomb as this would constitute a violation of Islamic principles, the West believes the Iranian government plans to have a nuclear bomb, considering that the military is concerned with maintaining the defense.

In the end, we can clearly see which side is interested in negotiating and which side is constantly looking for justification for escaping a deal. It remains to be seen whether the nations mediating the dialogue will act accordingly and demand a change in US attitudes as well as explanations on the part of Israel about the possible involvement in the explosion of the nuclear plant.
By Lucas Leiroz, research fellow in international law at the Federal University of Rio de Janeiro.
Source