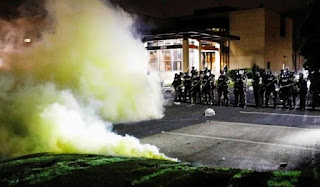 On the outskirts of the same city where George Floyd was choked to death by police officer Derek Chauvin last year, another police officer “accidentally” killed another black man. The killing of Daunte Wright on Sunday afternoon by police officer Kim Potter, was described as “accidental” by Brooklyn Center police chief Tim Gannon.
“This appears to me, from what I viewed and the officer's reaction in distress immediately after, that this was an accidental discharge that resulted in the tragic death of Mr. Wright,” he said.

Wright was pulled over by the police for having an outstanding arrest warrant and driving a car without registration. Police cam footage shows Wright resisting arrest and getting back in his car when instructed not to. Potter is then heard shouting “Taser” several times. Then, the officer is heard screaming, “Holy sh*t! I just shot him.” Wright managed to drive away, but crashed and died from the gunshot wound.

However, despite the appearance that this was an accidental shooting amidst an attempted arrest, which none-the-less does not make it any less painful for the victim’s family and friends, Wright’s half-brother, Dallas Wright, told a vigil on Monday that “My brother lost his life because they were trigger happy.”

The killing of Wright coincides with Chauvin’s trial for killing George Floyd, which is taking place only 10 miles away. With tensions already heightened in Minnesota because of Chauvin’s trial, hundreds of people gathered within hours of Wright’s killing. Looters once again began targeting shops and businesses despite the victim’s mother urging people to remain peaceful.

And it is here where the endless monotony of the U.S.’ significant divide between law enforcement and the black community continues its endless cycle. When a black man is killed by a police officer, it is almost given that the anger is directed against businesses, multinational and small alike. And of course, not to excuse the killings, but it is also common to then find out other details – such as Wright having an arrest warrant and resisting arrest.

This points to a complete breakdown in relations between law enforcement and the black community. U.S. police are famously aggressive and trigger happy, whilst black communities have difficulty looking internally to acknowledge disproportionate criminality. Yet, although it is possible that Potter “accidentally” killed Wright, it does once again bring to question the level of training U.S. police officers have if they could so easily mistake a handgun for a taser, even in the midst of an intense situation.

As of June 2020, the U.S. had the highest prisoner rate, with 655 prisoners per 100,000 of the national population. El Salvador, Turkmenistan, Thailand, and Palau rounded out the top five countries with the highest rate of incarceration.

By having the highest prisoner rate and population in the world, it highlights that the U.S. does not only have a criminality problem, but a rehabilitation and law enforcement problem. 40% of U.S. drug arrests in 2018 were for cannabis offenses, with the overwhelming majority related to possession charges. In the U.S. however, mass incarceration has caused more crime than it has prevented as harsh sentences are often used against low level criminality, such as minor possession of cannabis. Once in prison, low level criminals often make new connections and skills that they otherwise would not have made on the outside.

In this way, we see more people becoming hardened criminals whilst police continue their tough law enforcement. By having permeating issues of disproportionate poverty in the black community, resistance to acknowledging issues of disproportionate criminality in the black community, and a trigger happy police force across the U.S., it ensures that the continued cycle of blacks being killed by law enforcement agents, followed by a riot targeting people’s businesses, will continue unabated.

President Joe Biden described Wright's death as “tragic” and offered his prayers to the victim’s family. He also blasted the looting that occurred after Wright's death and promised a “full-blown investigation.” However, no number of prayers or investigations will end this significant divide in U.S. society between law enforcement and the black community – this can only be achieved through a complete retraining of U.S. police, reducing poverty and ending gang culture and hostile attitudes towards authority.
By Paul Antonopoulos, independent geopolitical analyst
Source