Maduro banned from Facebook as Guaidó gets a free pass 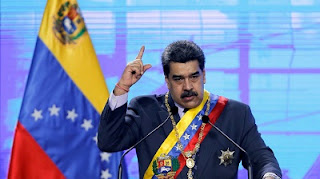 After Donald Trump, now it is Venezuelan President Nicolás Maduro’s turn to be banned from Facebook, albeit only temporarily unlike the former U.S. president. His digression? He praised the effectiveness of Carvativir, an oral solution used in Venezuela to deal with COVID-19.

Facebook has never censored any posts by opposition figures against Maduro, including coup instigator Juan Guaidó and his parallel government in the U.S. and Colombia. In fact, Guaidó used Facebook several times to call for a violent and military overthrow of the elected Venezuelan government. However, on March 27, the American social media giant blocked Maduro’s official account for thirty days and deleted his video extolling the merits of Carvativir against COVID-19.

When asked by Reuters why Maduro's account was temporarily suspended, Facebook said “We follow guidance from the WHO (World Health Organization) that says there is currently no medication to cure the virus,” adding: “Due to repeated violations of our rules, we are also freezing the page for 30 days, during which it will be read-only.”

The permanent deletion of Trump's Facebook, Twitter and Instagram accounts in January set a precedent. Effectively, social media giants have become a power themselves that can silence world leaders by restricting their digital outreach. Online platforms are increasingly becoming the main source for people to read the news and follow domestic and global events. For this reason, the Venezuelan Ministry of Communication and Information was quick to point out that “we are witnessing a digital totalitarianism exercised by supranational companies who want to impose their law on the countries of the world.”

Multinationals are now in a position to be able to impose their law given the tolerance to their quasi-monopolistic practices. Facebook is the leading social media network in Venezuela with eleven million users, or more than a third of the country's population. Facebook accounts in Venezuela is far ahead of Instagram, which is also owned by Facebook, which has 4.2 million subscribers. Therefore, by blocking Maduro on Facebook, the social media giant is silencing his voice from a large part of his constituency for 30 days.

A Facebook ban is considered by Caracas as an extension of U.S. sanctions against Venezuela that have been imposed since 2015 with the aim of regime change. Renowned journalist Maurice Lemoine, former editor-in-chief of Le Monde and an expert in Latin American-Caribbean affairs, said that Facebook is targeting Maduro, and not by accident. He also made the connection between blocking Maduro's Facebook account and the Western criticism against the Russian-made Sputnik V vaccine. Lemoine said that these policies are a “kind of emotional offensive” to break the “will of certain European states or even of the European Commission” in order to “ensure that Sputnik V is not used in Europe.” Facebook thus places itself as an international expert in health matters despite having no legitimacy to judge whether a drug can or cannot be used against COVID-19.

Venezuelan authorities have contacted the Pan American Health Organization and the WHO in order to deepen medical studies on Carvativir. Carvativir is an oral solution derived from thyme that was discovered by the doctor José Gregorio Hernández in the 19th century. The Venezuelan scientists developing the drug said Carvativir is mostly used in their country to treat adults and adolescents who develop pneumonia and need oxygen. Venezuelan doctors believe that Carvativir reduces recovery time in hospital and accelerate the patient's immune response.

In January, Maduro even went so far as to declare that they were “miraculous drops,” evoking the beatification of Doctor Hernández by the Catholic Church. The Venezuelan President has committed an imprudence, in Western eyes, by advancing in this way.

None-the-less, many doctors remain sceptical about Carvativir. The Venezuelan National Academy of Medicine claimed in January that Carvativir has “therapeutic potential against the coronavirus,” but called for caution and patience so more data can be collected. Yet, despite this, temporarily suspending Maduro from Facebook was a cynical ploy to significantly reduce his digital outreach to Venezuelans. As already said, neither Guaidó or his lackey’s were banned when they were instigating military coups from Facebook, demonstrating that the social media platform is an entrenched with Washington’s foreign policy.
Source