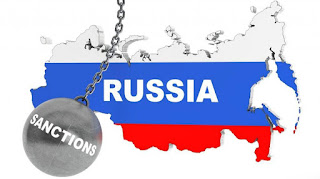 The US announced new sanctions against Russia on Thursday. The main reason for the new measures is the unfounded accusation of interference in the American electoral process last year, however, there are also other "justifications", as allegations of cyber hacking, the crisis in Ukraine and other issues commonly attributed to Moscow without any scientific support. Several Russian companies have been added to the American "blacklist" and ten Russian diplomats have been expelled from American soil. Also, American banks were banned from buying securities from the Russian central bank, the national wealth fund, and the Russian Ministry of Finance. In addition, it has been said that new measures may be announced soon.

Deputy Foreign Minister Sergey Ryabkov told the American ambassador in Moscow, John Sullivan, that Russia will take retaliatory actions soon, but details on what measures would be taken have not been provided. In fact, the official Russian narrative remains the same, denying any form of participation in the American electoral process or involvement in cybercrimes, however, this discourse prevails in American society, being constantly repeated by Western media agencies.

Interestingly, the new sanctions come in the same week that there seemed to be a positive sign in the troubled relations between Americans and Russians. On Tuesday, Joe Biden called Putin for a meeting between the two presidents in a neutral country, where a number of issues would be discussed, focusing on the current Ukrainian crisis, which appears to be one of the two countries' biggest concerns. And before Moscow could give a clear response on the meeting, Washington imposed new coercive measures on Russia, which demonstrates a strong ambiguity in the orientation of American foreign policy with regard to Russia.

On the case, the American president stated: "My bottom line is this: There is an interest in the United States to work with Russia. We should and we will", but (...) when Russia seeks to violate the interests of the United States, we will respond. I was clear with President Putin that we could have gone further, but I chose not to do so. I chose to be proportionate".

Biden's own response seems indecisive. There is no way to reconcile a desire for bilateral rapprochement with the imposition of new sanctions. And it seems contradictory to say that Russia "violates" American interests. Historically and even more emphatically in the last few years, what we see is a strong American interference in the Russian zone of influence, mainly in Ukraine and other border nations. What is happening now is a clear example of this, with the allocation of thousands of American soldiers on the Russian border to carry out extremely dangerous and provocative military exercises. So, in fact, it would be more appropriate to say that Washington is violating Moscow's interests, and not the contrary.

But the situation seems a little easier to understand when we emphasize the fact that the American government does not act alone in its decisions. The influence of the American Deep State on institutional decisions is evident and nowadays such a "deep state" goes far beyond the military-industrial complex, encompassing a wide network of defenders of American global hegemony. In fact, there is an ideological elite in the US, which advocates extreme measures to remove any form of limitation on American power. Biden rose to power as the candidate of this ideological elite – one of his greatest promise was to resume a policy of open confrontation with Russia, reversing the more nationalist and less interventionist stance that Trump had been building.

But now, Biden, as president of the greatest world power, needs to act with concrete data, consider material circumstances and deal with the geopolitical reality, ignoring ideological desires. The foreign policy promised by the Democrats is unsustainable and will lead to more conflicts around the world. The Defender Europe 2021 project is proof of this: clearly, the US plans to raise the number of troops on European soil to a historic level, as a way of affronting Russia, expecting proportionately violent reactions to justify sanctions.

The focus of these tensions is Ukraine, where it is already planned to wage a war with Russia. In the face of all this, Biden realized that the US anti-Russian orientation was leading to absolute chaos in international society and that a real war could occur in Eastern Europe. So, the American president called Putin in order to discuss these issues. His goal is not to normalize relations, but to find a neutral path for partial easing of tensions. Biden wants to confront Russia without generating an armed conflict - as it can happen in Ukraine. But this is not the goal of the American ideological elite.

Deep State networks, which Democrats serve, are not even conformed to the policy that Biden has taken so far, advocating an open and total confrontation with Russia, regardless of the possibility of war anywhere on the planet. This is because these elites are ideologically motivated - they are not concerned with the material reality and human cost of an anti-Russian foreign policy.

Biden, being a representative of the American ideological elite and the president of the country, tries to find a third alternative. He meets evident material needs when he calls for negotiations with Putin, but at the same time he serves Deep State’s interests when he imposes sanctions on Russia two days later.

In the end, Biden is really "confused" about which way to go. He tries to find a point of equilibrium where there is none. It is irreconcilable to try to normalize relations with Russia and at the same time to preserve a "global police" strategy. Moscow will not accept arbitrary sanctions and constant violations of its interests in its own zone of influence. There will be a response – and it concerns Biden. So, the American president has only one fundamental decision left: diplomacy with Russia or open confrontation. There is no third alternative.
Source