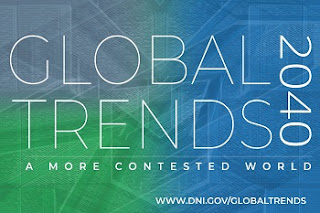 A recently published 156-page report by the U.S.' National Intelligence Council has scathingly attacked Russia as a revisionist power aiming at “disrupting” the international system. The report claims that Russia will “likely remain a disruptive power” for the next two decades because of its “sizeable conventional military, weapons of mass destruction, energy and mineral resources, an expansive geography, and a willingness to use force overseas.” Although the report claims that Russia is experiencing a decline in its material capabilities, it will “continue playing the role of spoiler and power broker in the post-Soviet space, and at times farther afield.”

However, the most alarming aspect of the report is its acknowledgement that it “assesses the key trends and uncertainties that will shape the strategic environment for the United States during the next two decades.” The report overly emphasises how the U.S. perceives the world to be shaped by 2040. Effectively, the National Intelligence Council identifies Russia as an adversarial state for at least the next two decades, meaning that for the medium term, no matter if a Republican or Democrat is in power; Washington will maintain a policy of hostility and provocation against Moscow.

The report states that Russia is a “rising and revisionist power” that is “seeking to reshape the international order” so it can be “devoid of Western-origin norms” by “seeking to roll back Western influence.” However, in the same paragraph, the report states that “Russia is promoting traditional values and desires a Russian-dominated protectorate covering much of Eurasia.”

Is Russia therefore revisionist or traditional?

It appears that the National Intelligence Council did not recognize their own contradiction considering, geographically speaking, Russia has been the heartland of Eurasia for over 300 years, well before the U.S. even became a country in 1776.

The report claims that Russia is “revisionist” as it opposes U.S. influence in Eurasia despite the fact that Washington, comparatively speaking, is a relatively new player to Eurasia and has very little influence in some parts of it, such as Central Asia. As an example, when Russia and Britain were competing for influence over Central and South Asia during “the Great Game” in the 1800’s, the U.S. was still in the midst of its westward expansion across the North American continent, went to war with Spain over islands in the Pacific and Caribbean, and had a Civil War – far removed from the Eurasian landmass. When put in this historical and geographical context, it is actually Washington that is a “revisionist power” in Eurasia as it attempts to impose a new order in regions that Russia has had a presence in from the time the U.S. was still a collection of British colonies.

Contentions over the post-Soviet space and Arctic is specifically what motivates the U.S. to continue its campaign of military, economic, diplomatic, media and artistic pressure and provocation against Moscow. It is for this reason that the West, led by the U.S., is currently portraying Russia as the instigator for the latest round of tensions in Donbass. This is despite the fact that the Ukrainian military were the first to mobilize troops, in addition to Kiev refusing to participate in the Minsk Protocol to find a peaceful resolution to the Donbass issue.

This once again brings to question how Moscow is a “revisionist power” considering Russia, Belarus and Ukraine all point to the medieval Kievan Rus' as their origin story. It is a historical fallacy for the U.S. to claim that it is opposing Moscow’s supposed revisionism in a region where Russians are indigenous. Rather, the U.S. is acting in a revisionist way by encouraging Ukrainian aggression against Russian-speakers in Donbass

The report also stresses that “a decrease in Europe’s energy dependence on Russia, either through renewables or diversifying to other gas suppliers, would undercut the Kremlin’s revenue generation and overall capacity, especially if those decreases could not be offset with exports to customers in Asia.”

Washington has found little success in trying to push Europe away from Russian oil and gas, with most states not willing to jeopardize their energy needs. The main opposition to the Nord Stream 2 project does not come from the major European Union states, but mostly from Lithuania and Poland. With no major opposition, it ensures that Russian energy will continue to flow into Central and Western Europe.

In effect, the report is more of a “wish” filled with historical, economic and geopolitical fallacies. The idea that Russia is a revisionist power in Eurasia is just merely a projection of the U.S.’ own actions across the vast region. Although the U.S. is a continent away from Eurasia, it does have cultural and historical affinities to Western Europe and bullied its way into West Asia. However, Russia is the traditional power in Eastern Europe, the Caucasus and Central Asia; India is the heart of South Asia; and, China dominates East Asia. These three countries are the traditional powers of Eurasia (with the exception of Western/Central/Southern Europe), unlike the U.S., which imposes itself into the affairs of the vast landmass despite being from the American continent.
By Paul Antonopoulos, independent geopolitical analyst
Source