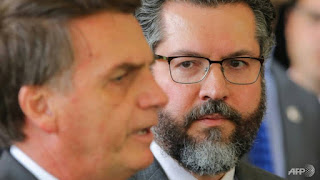 Many changes are about to happen in the Brazilian political scenario, mainly in foreign policy. On Monday, the Bolsonaro government announced a large ministerial reform, with changes in six ministries. Among the main changes are the Ministries of Defense and Foreign Affairs, which must mean deep reforms in Brazilian international praxis.

At the Ministry of Defense, Luiz Eduardo Ramos was replaced by General Walter Souza Braga Netto, former Army commander in Eastern Brazil and federal interventionist in Rio de Janeiro between 2018 and 2019, where he stood out in the fight against drug trafficking in one of the most difficult moments of the Brazilian history of the war on drugs. It is difficult to know what Netto's stance will be in relation to the main topics of his new office, however, he will certainly seek greater investments for the Armed Forces (despite being supported by the military, Bolsonaro’s government has one of the smallest investments in defense in Brazilian history) and it is unlikely that he will follow a policy of automatic alignment with the US, considering the anti-strategic and uninteresting content for Brazil of this orientation adopted by the government until then.

However, the main changes are with regard to the new Brazilian chancellor, Carlos Alberto Franco França, a career diplomat who was working on special advisory to the Presidency of the Republic before and now replaces Ernesto Araújo. The legacy of the last foreign minister is the worst possible: total subservience to Washington and rivalry with China (Brazil's main trading partner). Carlos França seems ready to face this challenge and certainly has the necessary potential for this, being a highly respected diplomat who has held especially important positions abroad. His specialty is bilateral relations between Brazil and Bolivia (where he has been an ambassador twice). In addition, Carlos has a moderate and neutral stance on political and ideological issues, which is an important posture for Brazil in the current international context.

In order to recover fraternal relations with China, Carlos França will have a great work in the diplomatic sphere, but this will only be feasible if, at the same time, changes occur in the general postures of the federal government in relation to Beijing. Advised by Araújo, who acted in accordance with the interests of the Trump administration, Bolsonaro adopted several measures that hampered Chinese investments in Brazil, such as Huawei's ban on the Brazilian 5G and reprisals against Coronavac.

It is important to emphasize that China was the main responsible for saving Brazil from the complete financial collapse in the last two years with its exports of several Brazilian products, mainly in the agribusiness sector. But, with the various anti-China offenses made by Araújo, this policy of cooperation decreased significantly and today the bilateral partnership is severely threatened. However, with the change in the American presidency, Brazil lost diplomatic support from Washington and now Brasilia is alone, without the US or China - something that Carlos França will try to change acting in order to recover ties with China, but that will only be possible if the government, among other measures, revise its decision on 5G and accept medical cooperation with Beijing (which is currently one of the main points of Chinese diplomacy).

Another point that should be highlighted is the possible improvement in regional relations in South America, mainly the bilateral partnership with Bolivia. This country is the center of attention of the new chancellor, who is an expert in Brazilian-Bolivian relations, having written the book "Brazil-Bolivian Electric Integration". In a context of profound changes in Bolivian political scenario, with the return of MAS, Brazil has a great chance to mediate Bolivia's dialogue with the rest of the world in a friendly manner and focused on regional interests - it remains to be seen, however, whether the Brazilian authorities will respond positively to the new minister's projects for Bolivia or whether the extremist right-wing and pro-American stance will remain firm in the government.

In his first attitude as new minister, Carlos França has already demonstrated his willingness to improve the image of Brazil abroad by naming as Secretary General of the Ministry of Foreign Affairs the diplomat Fernando Simas Magalhães, whose moderate postures and unblemished career reveal himself to be an extremely zealous professional for his country’s international relations. In fact, despite the new minister's enthusiasm to radically change the foreign policy of the Araújo administration, the changes will only be effective if the government abandons the pro-American policy it has been adopting, but Bolsonaro seems far from wanting this.

The ministerial changes did not occur exactly at the will of the Brazilian president but were the result of strong pressure from several sectors of the Brazilian society. Bolsonaro accepted to change his team because the situation with the former Ministers was terrible and demanded urgent attitudes, but this was not his real aspiration. In other words, despite the changes, Bolsonaro still keeps his ideological stance intact. This, however, will certainly lead him to strong internal isolation, without any ministerial support, which may weaken his government.

Brazil is at a turning point. Without American support, it is time to resume old alliances and seek new partnerships. Bolsonaro has strained relations with Biden, but he does not change his subservience to Washington and that strongly hinders Brazil. Now, with a chancellor focused on improving relations with China and South American countries, Brazil has the main means necessary to overcome the crisis and regain its status of privilege and respect among nations, however, Bolsonaro remains inert in his pro-American zealotry.
Source