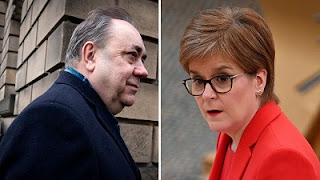 Johanna Ross is a journalist based in Edinburgh, Scotland.

Nicola Sturgeon is angry. She may have been aware for some time that her friend-turned-foe, Alex Salmond was planning a return to Scottish politics, but she is clearly furious nonetheless, as has been detected in recent interviews. No doubt, in part, due to the timing - just before the Scottish parliamentary elections in May which will be some of the most significant elections in recent history.

Why significant? Because they are the first Scottish parliamentary elections 2016, and since then we have seen both the Brexit vote and the coronavirus pandemic. Both these issues have considerably boosted support for Scottish independence, to a record figure of 58%. The country has never been closer to independence, it has never been more discussed, and the formation of another political party by Alex Salmond - ‘Alba’ (which means ‘Scotland’ in Gaelic) has only pushed independence further into the limelight.

During the party’s official launch press conference last week, Alex Salmond emphasised that Alba was set up to ensure there would be an independence ‘supermajority’ in the Scottish parliament. He said that it would be more difficult for the Westminster government to refuse the granting of a second independence referendum if there was a considerable majority in the Scottish parliament in favour of independence. Nicola Sturgeon however thinks that Salmond is on an ego trip, stating that he is only standing for election because he ‘loves the limelight’ and ‘can’t bear not to be on stage’. However there is obviously an element of revenge in this move as well; his allies (such as Craig Murray) have previously indicated he believed Sturgeon had organised a conspiracy against him so that he couldn’t return to politics. If Salmond does in fact believe this, it explains his motivation for setting up what is in effect a rival party, which stands to take both politicians and seats away from the SNP.

Already two SNP MPs have defected to the Alba party. One is a prominent figure - Kenny McAskill, Scotland’s former Justice Minister at the time of Lockerbie bomber trial - and Neale Hanvey, who holds the seat for Kirkcaldy and Cowdenbeath. In addition, four SNP councillors have jumped ship. There has also been some speculation that Joanna Cherry, a long-time ally of Alex Salmond, could join his party also.

However there is unlikely to be a mass exodus from the SNP. Alex Salmond’s reputation in Scotland has been considerably damaged by the sexual assault allegations he faced two years ago, and many are of the opinion that his political life should stay in the past where it belongs. He certainly doesn’t have the youth and vigour he once did, and Alba has already been labelled as a ‘ragtag band of outsiders and misfits’. Quite frankly, from its colourful contingent to its amateurish press conference, it has all the signs of a populist party: its latest addition being former boxer Alex Arthur whose previous controversial statements are already causing quite a stir.

As with all populist parties, the Alba party attracts those on the fringes, with views and ideology that don’t conform to the mainstream. Alba party supporters believe that Scotland needs to take a more radical path towards independence, and that Nicola Sturgeon should have taken more decisive action before now. Some even hold to the view that Sturgeon secretly doesn’t want independence for Scotland. They would endorse more of a Catalonia-style approach, staging a referendum without Westminster’s permission, and creating widespread protests. Sturgeon has tried to avoid this at all costs, having seen how the consequences played out in Spain. In any case, the emergence will create more discussion and debate around Scottish independence in the public discourse.

Having said that, as long as Westminster holds on to broadcasting powers, the Scottish people will have to put up with a biased mainstream media, which consistently undermines the independence cause. A priority for the SNP (assuming they are re-elected in May) before embarking on another independence campaign, should therefore be to have broadcasting powers devolved to the Scottish parliament. Only with an objective, balanced media can there really be a fair campaign for indyref2. But the UK government, understanding the power of propaganda in commanding the population, will be in no hurry to agree to this. It has long controlled the minds of Scots, pumping out Unionist propaganda for decades until social media arrived and opened up the debate. It understands how important it is to retain this domination over the population.

There’s a lot at stake therefore, come election day on May 6th. Not only will it be a test for Nicola Sturgeon, after the campaign waged against her over the Salmond case, but it will be a test for Scotland’s future in the Union.