Putin stands alone as the last pillar of common sense 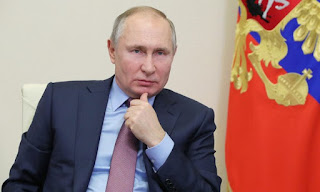 It has been quite a week in ‘Russia watching’. The Russian invasion of Ukraine that never was; the ‘Anchluss’ with Belarus that didn’t happen and yet another postponement to the ‘war with Russia’ that so many western politicians appear to be egging on. ‘Russia experts’ and pundits were never so wrong. The mainstream media has never looked so gullible. Alone, President Putin stands as what seems like the last pillar of common sense in this increasingly volatile and irrational world. Refusing to react to consistent western provocations, he has demonstrated remarkable tenacity in standing his ground and promoting peace and cooperation with partners that seem bent on a path of destruction.
Having said that, Putin has shown that despite his nation’s remarkable levels of patience and endurance, it’s not worth provoking the Russian bear. His one show of force of late was the gathering of Russian forces in south-west Russia. It created complete hysteria in the West, as politicians and the media alike seemed utterly convinced that a Russian invasion of Ukraine was imminent. What it was: a response to a buildup by the Ukrainian army in the east of Ukraine since early March 2021, which together with increased US and NATO military assistance to Ukraine of late and substantial supplies of military equipment from the US, warranted the accumulation of Russian forces near the border with Ukraine. And while we have heard various figures (seemingly pulled out of the air) for exactly how many troops Russia had gathered - anywhere from 100,000 to 150,000 - we have not heard anything in the western press about the 40,000 military personnel and 15,000 pieces of military hardware that were reportedly being amassed by Nato earlier this month in the Black Sea and Baltic regions.

Nevertheless, by carrying out these military manoeuvres - which are now over, as Defence Minister Sergei Shoigu announced Russian forces would be pulled back from 23rd April - Putin sent a strong message to the West: ‘Mess with us and you’ll regret it’. This sentiment was also communicated in his address to the Federal Assembly last Wednesday, which set him apart as the only world leader to condemn the recently unveiled CIA plot to assassinate the Belarusian leader Alexander Lukashenko, and to execute regime change in Belarus.

Declaring that the West had now ‘crossed all lines’, Putin was absolutely candid regarding Russia’s position: “We really do not want to burn bridges. But if someone mistakes our good intentions for indifference or weakness and intends to burn or even blow up these bridges, they must know that Russia's response will be asymmetrical, swift and harsh.”

It is sad that the Russian President felt it necessary to be so frank. But facing unprecedented levels of hostility from the US and its European allies, on all fronts, it is no wonder that he felt compelled to do so. What is even more unfortunate however, is that Putin warned of the dangerous path which was being tread, that has led to the current global instability, back in 2007 at the Munich security conference. His words uttered then, of course, went unheeded.

Moreover, they no doubt ruffled a few feathers in some quarters. After all, he quite openly spoke of the problems with the ‘unipolar world’ and US hegemony. He argued that it was a threat to global security and a new, apolitical architecture of international law should be created, under which all countries were equal: “In international relations we increasingly see the desire to resolve a given question according to so-called issues of political expediency, based on the current political climate. And of course this is extremely dangerous. It results in the fact that no one feels safe. I want to emphasize this – no one feels safe! Because no one can feel that international law is like a stone wall that will protect them. Of course such a policy stimulates an arms race.”

‘An arms race’ - exactly where we’re at now. Putin knew of the provocative nature of the statements he was making back then. He said right at the beginning of his Munich speech that he hoped they wouldn’t get ‘angry’ with him and stop him from speaking. But perhaps he did not anticipate the many years of wrath which would follow, and how deeply embedded Russophobia was in the psyche of many in the US establishment. He would not be forgiven for saying the following: “We are seeing a greater and greater disdain for the basic principles of international law. And independent legal norms are, as a matter of fact, coming increasingly closer to one state’s legal system. One state and, of course, first and foremost the United States, has overstepped its national borders in every way. This is visible in the economic, political, cultural and educational policies it imposes on other nations. Well, who likes this? Who is happy about this?”

The US is not used to facing such criticism. Putin’s ideas for a new security architecture, for working together to defeat terrorism, have been ignored. As a result, Russia has been forced, under years of sanctions, into isolation. Not completely of course. There has been a pivot to Asia, where China is proving a much more reliable partner than anyone to the west. The result of western aggression for Russia has arguably been beneficial; it is now largely self-sufficient when it comes to agriculture, and nationalism has been boosted considerably. Putin’s approval ratings remain consistently high. Living standards have dramatically increased since the nineties. But the other side of the coin is that world peace is in jeopardy. Never before has the ‘Doomsday clock’ been so close to midnight. The threat remains of full-blown war breaking out over Ukraine.

But it’s not clear how the Russian president could have acted any differently. After all, his role is not to be subservient to the West, but to defend Russian national interests. Furthermore, it is the ‘extremely restrained manner’ which Putin referred to in last week’s speech, that Russia has adopted, which alone has prevented global catastrophe. As he noted: ‘Often, we prefer not to respond at all, not just to unfriendly moves, but even to outright rudeness.’

But everyone has their limits. And if the West continues to provoke Russia (all the signs are it will continue) and promote its destabilization then there may come a time when Putin is compelled to respond. On this, the President did not mince his words on Wednesday: “Those behind provocations that threaten the core interests of our security will regret what they have done in a way they have not regretted anything for a long time.”

Putin spoke of the 'common sense' that Russians possess, which guides them in these uncertain times. Unfortunately the same cannot be said for their western counterparts. For Americans and Europeans, their between fantasy and reality has become blurred, with Russia providing a dose of drama that the developed world clearly craves. Maligning Russia, has, as the President said, become a sport. But the West ought to appreciate, that, one day this Russian bear might just get fed up being poked. And that's when we will really have to worry.

By Johanna Ross, journalist based in Edinburgh, Scotland.