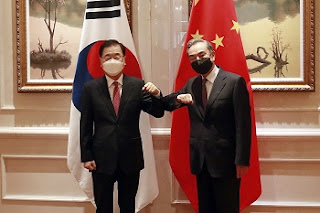 One of the ways to resolve the North Korean nuclear issue is to return to the six-party talks as a means to ease U.S. military threats against North Korea, something that China also firmly supports. Following discussions with his South Korean counterpart Chung Eui-yong in the city of Xiamen on April 3, Chinese Foreign Minister Wang Yi stated in an article posted on the Chinese Foreign Ministry website that denuclearization and the establishment of a peace mechanism on the Korean Peninsula has to be done holistically.

Wang Yi said that “all parties should make active efforts to maintain peace and stability on the peninsula, effectively resolve the legitimate concerns of the Democratic People's Republic of Korea, establish a permanent peace mechanism on the peninsula through dialogue and negotiation, and realize complete denuclearization of the peninsula.”

In the long run, eliminating the U.S.’ military threat is possible, but achieving it is a difficult prospect for now, especially since the U.S. is increasing its military presence in Northeast Asia. The ascension of Joe Biden to the White House does not change this stance, and in fact, threats are evolving as the U.S. is uninterested in making peace with North Korea.

Beijing’s call to eliminate military pressure on Pyongyang will require a multilateral effort by all those involved in the North Korean issue through the six-party talk format: the U.S., Russia, China, Japan and North and South Korea. All countries in the six-party format are global or regional powers in their own right and may, through collective effort, deflect U.S. military aggression against North Korea if a consensus can be found.

At the same time, it is clear that Beijing has the greatest opportunity to exert influence over Pyongyang. Seoul acknowledges this, and for this reason, during the South Korean Foreign Minister's first visit to China since 2017, Eui-yong tried to enlist Beijing's support to resume negotiations on denuclearization and peace on the Korean Peninsula that are currently at a standstill. The Korean minister in talks with Wang Yi said that Seoul expressed gratitude to Beijing and hoped it would continue to play an important role in the peninsula's affairs. For his part, Wang Yi noted that Beijing is looking forward to joining Seoul in dialogue to advance prospects for peace on the Korean Peninsula through political means.

At the same time, it was agreed during the Chinese-Korean ministerial talks to establish a new mechanism to consolidate political trust as a necessary condition to take reciprocal steps in solving the peninsula’s issues. The parties agreed to hold a 2 + 2 diplomatic and security dialogue between their deputy ministers. In the first half of this year, they will also hold a new round of strategic dialogue at the foreign minister level.

The talks in Xiamen came two days after a meeting in the Maryland city of Annapolis between U.S. National Security Adviser Jake Sullivan and his Japanese and South Korean counterparts - Shigeru Kitamura and Suh Hoon respectively. Sullivan’s first face-to-face meeting with his foreign colleagues is seen as an attempt to strengthen trilateral cooperation to prevent military threats emanating from North Korea. In the meantime, the parties did not raise anything specific but common concerns about North Korea's nuclear and missile programs, and the promise of joint cooperation for denuclearization.

This meeting was announced as a preparatory step for the U.S. to survey the situation on the Korean Peninsula. It was expected that Sullivan would clarify Washington's position on China’s role in resolving the North Korean issue. However, this did not happen. Before the Annapolis meeting, Biden's team harshly criticized former U.S. President Donald Trump's three meetings with North Korean leader Kim Jong-un as they supposedly legitimized a regime and its dictator.

Meanwhile, observers believe that the trilateral meeting sent some kind of signal to Pyongyang about continuing Trump’s policy of opening up to the possibility of solving issues on the Korean Peninsula. These opinions exist despite the comments made by the Biden administration days earlier.

Against this backdrop, with the help of Beijing, Seoul made a strong political move. At the talks in Xiamen, China and South Korea noted the great positive significance of the joint statement made by the leaders of the U.S. and North Korea after their 2018 meeting in Singapore. However, that Trump-Kim meeting seems like a lifetime ago and a Washington-Pyongyang rapprochement is still a distant hope.
Source