"Symbolic naval war" is emerging between Israel and Iran 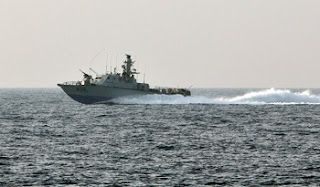 In the Middle East, tensions between Israel and Iran are escalating, but at the same time changing their focus. Recently, both countries have faced each other more frequently at sea, carrying out dangerous maneuvers and reporting the occurrence of several attacks against vessels on both sides, with emphasis on the Israeli attacks, which become more powerful day after day. Apparently, what was previously a conflict focused on aerial bombing and intelligence and espionage operations is becoming a naval war, marked by constant displays of force.
Last Tuesday, April 6, an Iranian ship was attacked in the Red Sea with an Israeli mine in an unusual operation, totally atypical by the standards of the Iran-Israel conflict. The ship hit in the operation was called "Saviz", a commercial civilian vessel that did not pose any danger to maritime security in the region and was not spared from Israeli reprisals, whose levels of aggressiveness rise quickly.

The purpose of these operations is to implement a policy that Tel Aviv has been adopting in recent times with regard to its relations with Iran: to show strength whenever possible and to warn the enemy country that at any moment Israel can hit it. At sea, where violence has increased recently, this tends to generate more violence precisely against vessels with no offensive potential, such as commercial ships, as the objective is no longer to neutralize the enemy country, but to intimidate it in all ways.

For years, the Israeli Navy's stance on Iran has been to maintain a systematic interception of all vessels transporting military material in support of Tehran-friendly organizations abroad, such as Hezbollah and other Shi'ite militias. However, the stance has become a little different since 2017, when Israel decided to adopt the policy called "war between wars", a military tactic where low-intensity operations are carried out more frequently, the purpose of which is to issue constant warnings to enemy countries - which, it is hoped, will also respond with high frequency and low intensity operations, generating a "mild" and "symbolic" conflict. That is why the targets of the Israeli Navy are currently multiple, as the Tel Aviv plan is no longer to obtain effective military results, but to show Tehran how its vessels are not safe at any time.

Although this type of policy generates great international discomfort, with constant news of destroyed vessels, it is possible that, in practice, tensions will turn into a "symbolic naval war", where the displays of force are constant, but do not rise to the level of a real conflict. This type of confrontation could at the same time neutralize the threats of war between the two countries and raise tensions, creating a constant uncertainty about the near future.

However, it should be noted that the intensity of the attacks can have serious economic implications. From the moment that Israel encircles Iran by sea, destroying all its commercial vessels, Tehran is more and more threatened. By targeting Iranian maritime trade, Israel is damaging the economic and social stability of Iran and all countries that negotiate with Tehran and this will certainly be responded in an equivalent manner. Therefore, although many experts currently believe in the merely symbolic effect of a naval confrontation, the situation could worsen and the violence could escalate at any time if the structure of Iranian maritime trade is really damaged, creating internal economic problems.

Iran's future stance in the face of Israeli provocations will depend, above all, on the outcome of the country's elections, which will take place in June. Until then, it is very unlikely that there will be an increase in violence or an open confrontation, as Tehran will be focused on resolving its internal issues and perhaps the certainty that it will not have responses with an equivalent strength is why Israel has been tightening its operations recently.

But that will certainly change. Having consolidated the new government, nothing will prevent Teheran from seeking retaliation for its vessels and this is something that is already in the forecasts of Israeli strategists, who may advise their military to decrease the frequency of attacks. With that, little is likely to change in practical effects, but until the elections take place in Tehran, Israel will progressively surround Iran by sea.