Tensions over the Arctic are on the rise 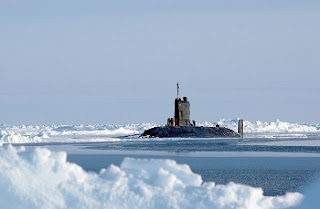 Much has been written recently on Russian military activities in its far north region. Not so much has been written on NATO's ambitions to militarize the Arctic or on the military activities of the US and their NATO allies in the region (or even their bellicose rhetoric regarding this issue).
Last Wednesday, a Norwegian electronic warfare aircraft was intercepted by Russia over the Barents Sea near the Arctic, approaching the Russian border. To prevent border violations, a Russian MiG-31 fighter intercepted it and escorted it over the Barents Sea. Norway (a NATO member) shares a common border with Russia in the Arctic. Norway and Russia's relations used to be rather cordial; however recently there have been incidents.

For example, in December, Norway's domestic intelligence agency, the Police Security Service, blamed a cyberattack against the Norwegain parliament on hackers supposedly linked to Russian military intelligence services - even though the case was closed due to lack of evidence. It would appear Norway's rhetoric is being fueled by NATO's plans and interests in the Arctic.

One needs to keep in mind that last September, Norwegian, US, and British navies conducted joint exercises in a region that lies just 100 miles from the Russian coastline. Also last year (in March), Norwegian, US, British and many other NAT0 units (and also units from Finland and Sweden) conducted exercises in northern Norway simulating a combat scenario of high intensity.

Climate changes are causing a huge ice melt in the region: the glacier walls of the Arctic are melting. And that (besides being an environmental concern) opens up strategic shipping routes and potential natural resources.

Last year, we saw the longest Arctic sailing season, precisely due to the record high temperatures and the resulting thinning ice. Normally this route is open from June to October when the ice breaks. Last year, it started a month early and continued up to December. This phenomenon allows natural gas exporters to sail more ships across the so-called Northern Sea Route which stretches over 3,000 nautical miles from the Barents Sea (west of Russia) to the Bering Strait (east of the country). This situation threatens strategic oil and gas infrastructures in northern Russia and also in Alaska and Canada.

However, for the liquefied natural gas industry, this potentially disastrous scenario might turn out to be a great opportunity because it decreases shipping costs for the cargoes allowing them to head straight to Asia, for example - normally they would have to transit through the Suez Canal. The recent blockage of the Suez Canal last month (for almost a week) by a container ship raised the question, once again, of searching for an alternative route for global shipping. Another alternative would be digging canals to connect Israel's Red Sea port of Eilat to the Mediterranean as has been discussed by Israel and the United Arab Emirates - the problem is that Egypt strongly opposes it and it would be too expensive to implement as it would take at least a $100 billion investment.

The Northern Sea Route, thanks to global warming, is becoming an increasingly attractive option. The navigation distance via this Northern Sea Route - from a Northwest-European port to the Far East, for instance - is about 40% shorter compared to the distance via the Suez Canal. So, it is an important passageway for China and it could even join with the Chinese Silk Road.

Even though there are very attractive advantages to be exploited, there are further environmental risks, also - an increase in the number of ships would actually accelerate ice melting and as a result of that speed up the warming, in a kind of feedback loop. The ice walls white surfaces reflect sunlight and thereby cool the atmosphere. When they melt and are replaced by ocean water, these darker waters actually absorb solar light. Plus, an increase in shipping traffic across the Arctic is an increase in the emissions of polluting gases which further boost temperatures and threatens a delicate regional biodiversity.

Climate changes have a potentially deep impact on Russia due to its geopolitical situation. Much of the Arctic neighbors northern Russia. In a way, part of the Russian natural defence walls are melting - at an alarming rate. Moscow signed the Paris climate change treaty and takes the issue very seriously.

Apart from that, Russian goals in the Arctic are predominantly economic. The US Navy, in its turn, has reactivated the Second Fleet in 2019 (to counter the Russian Navy) and the US state of Alaska has the highest concentration of fifth generation fighter aircrafts worldwide. Canada, Iceland, Norway, Sweden, and Britain all claim territorial rights in the Arctic region. It is difficult to designate national borders there due to the frozen nature of the region and Western countries, led by the US, can coordinate their maritime border claims against Russia. Any country will place high value on its territorial security and its strategic infrastructure. So, Russian military build-up is clearly defensive. To increase Norwegian military activity in the region amounts to damaging current peace and stability.

The Arctic is an arena for geopolitical dispute but it is also the stage for a global issue. Ice melting and rising sea levels are a potentially catastrophic global problem that requires international dialogue and cooperation. For decades the Arctic has been a region of active international cooperation. It should remain this way.
By Uriel Araujo, researcher with a focus on international and ethnic conflicts.
Source