UK about to send ships to the Black Sea 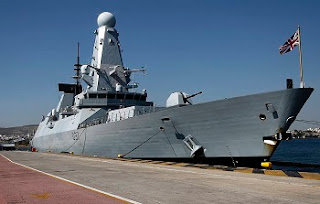 New tensions are emerging in Ukraine as more countries decide to intervene in the region. This time, the United Kingdom, defending Kiev's interests and showing support to the US and NATO, decided to participate in the crisis in Eastern Europe by sending military ships from its Royal Navy to occupy the Black Sea. The act sounds truly irresponsible, considering that it involves another major military power in a regional crisis, unnecessarily increasing tensions that would be resolved peacefully without the involvement of foreign powers.

According to British media, a Type 45 destroyer, armed with anti-aircraft missiles, and a Type 23 anti-submarine frigate will leave the Royal Navy's HMS Queen Elizabeth aircraft carrier group, which is in the Mediterranean, and will head across the Bosporus Strait to the Black Sea. The strong potential for destruction of these vessels highlights British plans for the Black Sea region. The Royal Navy is prepared to act with a military force that is absolutely huge for the current dimension of tensions, which shows that the West really expects an open conflict to arise in the region.

In parallel, sources at the Turkish Foreign Ministry confirmed to the media that London recently sent a notification to Ankara about the passage of British ships through the Bosporus Strait, which gives access to the Black Sea. This is expected to take place in the first week of May. The details of the operation are not yet known as well as whether the vessels assigned to the mission will cross the route to the Black Sea simultaneously or at different times, however, it is clear that there will be a significant escalation in military activities in the area in the coming weeks.

It is important to emphasize that, according to the data obtained so far, it appears that the British plans will violate the rules established in the Montreux Convention, which regulates naval activities in the region, limiting the number of ships from countries not bathed by the Black Sea, and the simultaneous displacement of vessels in those waters. If British ships cross the region simultaneously, there will be a violation of international law and, even if the passage is operated in a non-simultaneous way, there may be as abuse of the rules, depending on the number of ships - which is still uncertain, considering that NATO forces will also send more vessels to the site. Taking into account that several American ships have already been sent to the Black Sea recently and that more vessels are expected to arrive in the region soon, the flow of ships is likely to exceed the limits imposed by the Convention.

This is not the first time - and it certainly will not be the last time - that the UK sends its military forces to Ukraine in support of Kiev. In 2018, British troops and ships were sent to the region in order to support Kiev against "Russian hostilities". At the time, London claimed to defend Ukrainian "democratic freedom" and invested heavily in bilateral military partnerships. This alignment remains today and tends to continue as the UK shares the American interest in implementing a policy of encircling Russia - interest that has declined significantly in Europe, for example, but which remains strong in London.

In fact, all tensions involving disputes in maritime territory have a common symbolic character: in tactics of naval warfare, demonstrating strength is more important than having real military force. When the West tries to allocate as many military vessels as possible with high destructive power in the Black Sea, its intention is simply to show strength in order to impose fear on Russia, trying to pressure Moscow to assume a position of obedience.

In the specific case, the West wants to prevent Russia from exercising its sovereignty over Crimea and, for that, it is essential to obstruct the flow of navigations in the Black Sea and maintain a permanent encirclement policy. This orientation by the West has intensified in recent weeks due to a number of factors that are growing tensions in the region, however, most of these factors are just unfounded accusations by Kiev and NATO to justify coercive measures against Russia - such as the accusation that Moscow was allocating nuclear weapons in Crimea. In imposing a naval siege on Russia, the West also acts provocatively as it makes it more difficult to maintain Russian activities in its own territory, demanding a reaction from the country. The West's main objective is precisely to receive a Russian reaction that justifies more measures and more violence - and that is why Moscow presents a patient, strategic posture and slowly builds an adequate response, by non-violent means.

A symbolic war with its spectacles of constant displays of strength is absolutely unnecessary for a tense and complicated region like the Black Sea. The Western stance is dangerous and, above all, unsustainable. Biden, apparently, remains willing to meet with Putin and negotiate a solution for Ukraine. But how does he expect a positive response from Moscow when the US and its main allies continue to increase violence day after day?
By Lucas Leiroz, research fellow in international law at the Federal University of Rio de Janeiro.
Source