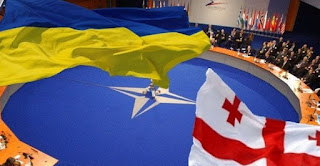 Kaliningrad Oblast is completely surrounded by Poland and Lithuania, and Russia proper shares land borders with Norway, Estonia and Latvia – all NATO members. However, if Ukraine and Georgia joined the Alliance, it would be the biggest encroachment against Russia by NATO since the infamous February 1990 “iron-clad guarantees” made by then-U.S. Secretary of State James Baker. Baker promised Soviet President Mikhail Gorbachev that NATO would not expand “one inch eastward” if Moscow supported the reunification of Germany, which it ultimately did. Since the promise to not expand “one inch eastward,” Poland, Hungary, Czechia, Slovakia, Bulgaria, Romania and the Baltic States have all joined NATO.

One of the major pressure points against Russia is the Black Sea. This also explains why Greece and Turkey were NATO’s first enlargement states when they joined in 1952, only three years after the Alliance was founded. At the time, the Black Sea was nearly under complete socialist rule. Turkey controls the entire south shore of the Black Sea, making its ascendency into NATO a major priority. Greece on the other hand was, and still is, a Plan B in case Russian ships are able to sail through the Bosporus and Dardanelle Straits in a hypothetical war.

The collapse of the Soviet Union in 1991 shook the international system and regional dynamics. It saw Moscow lose its near total dominance over the Black Sea as once-allied post-socialist states, like Bulgaria and Romania, began their pivot to the West. Although Bulgaria and Romania achieved NATO membership in 2004, the reality is that neither country has the naval capabilities, even when alongside Turkey, to tip the Black Sea’s power balance in NATO’s favor.

Ukraine and Georgia are also Black Sea states. Not only are they hostile to Moscow, but they have ambitious goals of achieving NATO membership. It is hoped by Washington that Georgia will become a Caucasian salient to surround and isolate Russia on the fringes of where Europe and Asia meet, while Ukraine would provide NATO’s longest land border with Russia and access to new ports in the Black and Azov Seas.

Although Ukraine and Georgia want to become NATO members, they face significant obstacles, especially as they have unresolved territorial disputes: Ukraine with the self-proclaimed Peoples Republics of Lugansk and Donetsk (collectively known as Donbass); and, Georgia with the Republics of Abkhazia and South Ossetia, which do have limited international recognition. So long as the question of Donbass’ sovereignty remains unresolved and the independence of South Ossetia and Abkhazia contested by Georgia, the two countries cannot become member states as NATO clearly outlines:

“States which have ethnic disputes or external territorial disputes, including irredentist claims, or internal jurisdictional disputes must settle those disputes by peaceful means in accordance with OSCE principles. Resolution of such disputes would be a factor in determining whether to invite a state to join the Alliance.” Besides NATO’s own policies, the hard truth is that most of Europe is unwilling to go to war with Russia for the sake of Ukraine and Georgia.

To ensure that the U.S. Military Industrial Complex maintains a monopoly on arms sales to all 30-members of NATO, it pushes countries to spend at least 2% of their GDP on the military. The overwhelming majority of NATO countries fall short of this benchmark. In 2019, Ukraine spent 3.36% and Georgia 1.99% of their GDP on the military. This was despite both countries not being NATO member states.

The governor of the National Bank of Ukraine, Kyrylo Shevchenko, told Global Capital: “The last year has been a particularly tumultuous one for Ukraine with the fight against Covid-19, a change of central bank governor, and most recently, the reinflammation of tensions with Russia.” In addition, failure to enact a reform agenda has prevented Kiev from securing more loans from the International Monetary Fund under a $5 billion deal approved last June.

Under these conditions, it would be more logical for Ukraine and Georgia to focus on their development with surrounding regional states rather than serving the hostile interests of a power located on another continent. It is for this reason too that the majority of Europe’s NATO members are not willing to allow these two countries into the Alliance as it is they, and not the U.S., who will have to face the repercussions of another potential war on the continent. This by no means makes Europe friendly to Moscow. It does mean though that Europe, with the exception of perhaps Poland and the Baltic States, is not willing to provoke Georgia and Ukraine into a war against Russian nationals.

In these two conflicts, Moscow demonstrated its determination to protect its nationals in spite of U.S. threats. Yet, even with these two examples, Ukraine and Georgia maintain a policy of hostility against Russia rather than finding a peaceful resolution that can lead to economic cooperation and prosperity, something the U.S. cannot offer them from over 7,500km away.
By Paul Antonopoulos, independent geopolitical analyst
Source