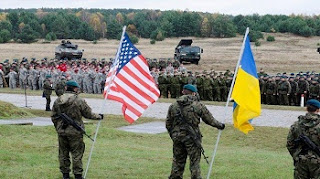 Once again, the Western military alliance initiates provocative maneuvers against Russia on European soil. 28,000 soldiers from 27 countries, led by the American Army, are participating in "Defender Europe 2021", a daring military training and combat simulation project that operates in more than 30 areas of occupation in more than a dozen countries simultaneously.

Defender Europe 2021 succeeds last year's project, which would be the largest Western military exercise in 25 years but has been reduced due to the new coronavirus pandemic. In the current scenario, the new project is more realistic and therefore can be seen as more dangerous, especially if we take into account the fact that it covers a wider territorial area, including the Balkans and the Black Sea, in addition to using land and maritime routes linking Europe, Asia and Africa for the circulation of soldiers, equipment and remote monitoring. Soldiers and equipment arrived in Europe last month, when the drills started, and in May the deployment of pre-positioned NATO troops in the Netherlands, Italy and Germany will begin. The drills will end in June.

Interestingly, the global situation of the pandemic has not improved - on the contrary, the waves of infection are successively becoming worse and not even vaccination campaigns are effectively preventing the virus cycle (mainly in Europe, where vaccination is slower than predicted by the authorities months ago). However, the disease does not seem to be a sufficient reason to postpone NATO's war plans. Commenting on the case, General Christopher Cavoli, commander-in-chief of the US Army for Europe and Africa, said: “While we are closely monitoring the COVID situation, we've proven we have the capability to train safely despite the pandemic . No matter what, our nations count on our forces being ready to defend the peace". It is curious to note the speech of the American military classifying as "defense of peace" a plan to deploy thousands of soldiers in regions of strong political tension just to provoke reactions from a military power.

In another statement, General Cavoli said that the exercises serve as a showcase event for responses in the event of a crisis. The multifaceted nature of military tests is expected to show what a Western defense plan would look like in the event of a combat situation, and the diversity of routes and occupation zones shows how complex NATO plans are.

However, there is still a conflict of narratives on the actual data of the Defender Europe 2021. Russian officials believe that the actual number of NATO troops is much greater than has been officially reported. Recently, Russian Defense Minister Sergey Shoigu said NATO is sending 40,000 troops to the Russian border, mainly occupying Poland and the Baltic States. According to Shoigu, Defender Europe 2021 is, in fact, the largest Western military exercise in 30 years and is carried out “with a clear anti-Russian orientation".

A Kiev official, the Ukrainian representative in the Trilateral Contact Group at Donbass, Oleksiy Arestovich, earlier informed UKRLife.TV that a war with Russia would be practiced as part of the Defender Europe 2021 exercise. An evidence of this preparation for the war is that, on Wednesday, there was an unusual military exercise by the Ukrainian armed forces simulating repelling a Russian tank and infantry attack in Crimea.

And Ukrainian Defense Minister Andrii Taran accused Russia of trying to allocate nuclear weapons in Crimea, which would "justify" the tests as a Ukrainian response. Taran's allegations were not presented with any evidence, being superficial accusations.

In any case, the reality is undeniable that the anti-Russian thinking common to Ukraine and the West is being elevated to an open confrontation, with the purpose of war. A few days ago, Foreign Policy magazine published an article by Amy Mackinnon, a national security and intelligence reporter, suggesting that Russia would be preparing to go to war with Ukraine - something that has always been denied by Moscow’s officials. In the end, such analyzes by Western strategists serve as a justification for raising the paranoia of "Russian threat" to a desire for war - something that must be rejected by all sides.

In the face of all this tense scenario, it was not by chance that Biden decided to call Putin in order to schedule a meeting in a neutral country. Washington has lost control over its own attacks on Russia and is now trying to deal with the damage that could result in a new conflict in Eastern Europe. It is curious to note how the US has endorsed the anti-Russian narrative and deployed thousands of soldiers on the Russian border, fueling the pre-war tension that is happening now, and is suddenly trying to negotiate with Russia.

If the proposed talks are to be held Moscow will certainly insist on the withdrawal of a considerable part of NATO troops from its border and demand from the US a more peaceful and less intervening conduct. If Biden, being an avid pro-American ideologist, is willing to negotiate, it is because the West really is not in a position to withstand the explosive situation that it itself created.
By Lucas Leiroz, research fellow in international law at the Federal University of Rio de Janeiro.
Source