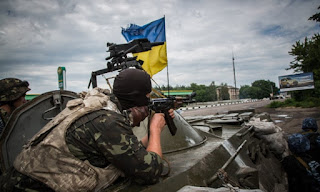 NATO's interference in the volatile situation in eastern Ukraine could lead Kiev to lose several more areas of the country's southeast, according to the former head of the Central Investigation Department of the Security Service of Ukraine, Major General Vasyl Vovk.

“Everyone knows that without NATO we will never win the war, if we go to war. The first question is: if we are in NATO, will NATO go to war against Russia? Big question. Hard. Most likely not,” he said, adding “now we have neither Crimea nor a part of Donbass, and we say we should go to NATO. No one will even take us into NATO, no one will defend us in such a situation where the state has no control over its entire territory.”

He emphasized that Ukraine cannot win the war without NATO’s direct involvement but that the Alliance is not willing to participate in the fighting. The general also stressed that Ukraine is heading down a similar path to Georgia in 2008 when NATO promised assistance in their military campaign against the breakaway republic of South Ossetia but ultimately did nothing when Russia intervened.

Vovk warned that if a new war began the Ukrainian military would “withdraw to Kharkiv, and then Donetsk, Kherson and Nikolaev regions will remain behind them.”

The worsening of the situation in Donbas and Ukraine’s endless provocations, including a drone strike that killed five-year old Vladik Shikhov earlier this week, shows that Kiev is ready to do anything to serve U.S. interests without considering the repercussions.

Fire fights, mortar attacks and drone strikes are becoming a daily event on the Line of Contact between the Donbass militias and the Ukrainian military. The leader of the self-proclaimed Donetsk People's Republic (DNR), Denis Pushilin, did not rule out the possibility of a Ukrainian offensive against Donbass and emphasized that they are ready for any development. He believes that the chances of stopping a military conflict are “very small” and that the DNR and the Lugansk People’s Republic (LNR), both collectively comprising of Donbass, “are doing everything possible to end the conflict in a peaceful way. However, Kiev is in a different mood.”

Kiev is ready to fulfill every demand made by Washington as they are demonstratively showing that they are incapable of independent decision making. Ukrainian President Vladimir Zelensky and his government are trying to prove their loyalty to the Joe Biden administration. This is so much so that they are prepared to engage in a large-scale combat operation against Donbass, hence the deployment of at least 30,000 soldiers and the transfer of heavy military equipment to the Line of Contact.

Russian officials and generals have repeatedly warned that Ukraine risks not only a humanitarian catastrophe, but also its own survival if the conflict in Donbass escalates. Russian President Vladimir Putin said in February that “We will never turn our backs on Donbass, no matter what.” In this way, despite the intense media campaign and pressure from NATO, Russia is not deterred from protecting its interests and security directly on its border.

In this way though, Western media are engaging in an intense campaign to blame Russia for the worsening crisis despite the fact that it was Ukraine to first mobilize troops and equipment along the Line of Contact. It cannot be overlooked that Kiev this week withdrew from the 2014 Minsk Protocol that halted the war. During the signing of the Minsk Protocol, it was clear that Kiev would not fulfil it because it betrays Washington’s interests in exploiting ethnic and political crises on the doorstep of Russia.

The Minsk Protocol was approved by the Security Council. By refusing to implement it, Kiev is defying a key body of the UN structure. The principles that are the basis of the UN Charter are not only being defied by Kiev, but also by Washington and London who are providing diplomatic, military and media support.

Although Ukraine undoubtedly has the support of the U.S. and Britain, there are also many in Europe who oppose Ukrainian actions in Donbass. Ukraine's aggression against Donbass, as an example, has the potential to affect the completion of the Nord Stream 2 gas pipeline. Despite this risk, the project will likely be completed because it primarily revolves around commercial interests and not politics. However, Washington will likely utilize supposed Russian aggression against Ukraine to pressure European countries, especially Germany, to scrap the Nord Stream 2 pipeline.

None-the-less, it is also likely that NATO is encouraging and instigating Ukraine to resume the war against Donbass, but will not risk their own soldiers for the sake of a non-member.
Source