US going to withdraw from Afghanistan, but can they leave? 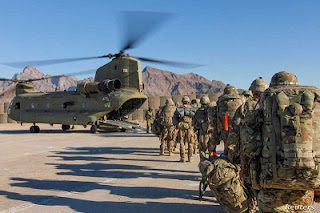 Last week, civilians were killed in a operation conducted by Afghan security forces against the Taliban in the Khost province. In spite of Afghan peace talks launched in September 2020, violence still goes on.

Since last year the US has been seeking an agreement with Taliban. Iran has also been competing with the US to influence Afghanistan and has been seeking to secure relations with the Islamic organization. In fact, Moscow too has strengthened its communication channels with Taliban and so has India been challenged to do so. A number of US politicians have accused Moscow of funding or arming the Taliban but there is no evidence to back such claim,

The US has been pushing very aggressively for a complete peace deal, which would give the Taliban an (internationally recognized) place in the Afghan government in a kind of “power-sharing” compromise – therefore, the Islamic group has a lot to gain. In fact, US praxis demonstrates that it no longer considers the Taliban a mere terrorist group. The US often prefer to negotiate with the Taliban than with current Afghan President Ashraf Ghani for reasons that are not entirely clear. Part of it certainly has to do with the fact that the Taliban has shown its resilience since the nineties. It is an armed group who receives wide support from the important Pashtun ethnic group. In other words, the Taliban is there to stay.

One thing that should be highlighted is that during the Soviet intervention in Afghanistan (1979), Afghan mujahideen combatants fought Soviet forces – and many of those would later be part of what became the Taliban, according to University of Edinburgh Professor Carole Hillenbrand. It is a well known fact that in the early 1980s, both the American CIA and the ISI (Pakistan intelligence agency) provided weapons to these fighters – Osama bin laden himself was one of the key organizers of training camps in Afghanistan for foreign (mostly Arab) jihadist volunteers. For the US until 1997, the Taliban was a useful anti-Iranian organization.

Under the agreement signed in late February 2020 between the Taliban and the previous Trump administration, the US as well as their NATO allies were to remove all troops in 14 months – provided that the Taliban upheld the terms, which included not allowing Al-Qaeda militants to freely operate in the areas it currently controls plus ending Taliban attacks against American forces and starting peace talks with the Afghan government. Peace talks did ensue (with little success) but Taliban attacks (against non-American targets) have increased while cooperation with Al Qaeda continues (according to UN reports).

The deadline for American troop withdrawal was until May 1 or else a new arrangement should be negotiated. The US proposal calls for an interim government and a new constitution to be drafted, followed by elections. This alternative placed the Taliban at crossroads: the holding of elections as proposed by the US is viewed by the group and by many Pashtun as a Western-imposed mechanism. As part of the current administration aggressive take on the human rights narrative, the US will also expect advances in terms of the rights of minorities and women the way the West understands it. Furthermore, the Taliban views the current Afghan government is nothing more than an extension of the US occupation and therefore illegitimate. Sharing power with such government would be the same as betraying its own goals of bringing about an Islamic government as it conceives it – unless such can be rationalized as a strategic path to power and to Islamic government.

Biden, in his turn, is also at crossroads: by withdrawing, he risks giving the Taliban an opportunity to keep fighting against the Afghan government to fully seize power. By keeping American troops there, he would be violating a deal and the Taliban could declare war against the US all over again. By postponing the withdrawal, he buys some time. The dilemma remains, however.

Another issue that is rarely touched upon has to do with the economics of heroin and opium production as well as other drugs. Afghanistan is the largest producer of opium (and hashish) globally. Recently, it has been report that a new supply route is emerging by which Afghan-produced methamphetamine is being trafficked to South Africa, In July 2000, during Taliban rule, it fought its own war on drugs, which resulted in a 99% percentage reduction (in the area of opium farming) and was one of the world's most successful anti-drug campaigns. It was short-lived: soon after the American deposition of the Taliban (in 2002), heroin came back, and many drug lords rose to prominent positions in the US-backed Hamid Karzai government.

The US occupation actually caused a large increase in opium production (as was the case in Indochina during the Vietnam war). A 2014 SIGAR report estimates cultivation rose by more than 200,000 hectares (since 2001). There have always been allegations of CIA involvement in this illicit trade. Both Peter Dale Scott University (former diplomat and University of California professor) and Wisconsin Professor Alfred McCoy have written on the subject of the geopolitics of the drug trade in Asia and the interplay between covert operations and organized crime elements into which they often metastasize. The US record of collaborating with drug dealers or even engaging in such trade is well known in Latin America also.

Because of that as well as other factors, even if an American withdrawal occurs, one can expect that the US will maintain a presence in Afghanistan by deploying its special forces, for example, as they do in the African continent today. Plus, Afghanistan is currently an arena for geopolitical competition between regional and global powers and the US cannot possibly completely back out.
Source