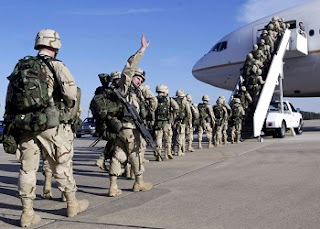 U.S. President Joe Biden officially announced the withdrawal of American troops and NATO allies from Afghanistan in a televised speech on Wednesday. Accordingly, the withdrawal of these forces will begin on May 1 and symbolically end on September 11.

American troops and their allies invaded Taliban-held Afghanistan after the September 11 terrorist attacks. The guise used to invade Afghanistan was to prevent the country from ever becoming a launch pad to attack the U.S. again. In his speech, Biden stressed that this goal has already been achieved and that the U.S. “cannot continue the cycle of extending or expanding our military presence in Afghanistan, hoping to create ideal conditions for withdrawal and expecting a different result.”

“I’m now the fourth United States president to preside over American troop presence in Afghanistan,” he said, adding “Two Republicans, two Democrats. I will not pass this responsibility on to a fifth.”

This is an unsurprising expectation considering that the Taliban are already boasting about their victory over the U.S. following Biden’s announcement. In speaking with the BBC, Haji Hekmat, the Taliban's shadow mayor in Balkh district, said “we have won the war and America has lost.” He also confirms that “the Taliban before and the Taliban now are the same” and they do not “fight for power but for Allah and His Law” and “whoever stands against us, we will fight against them.”

There is clear concern in Kabul as the Afghan Army has very little control over the rural areas of the country and are mostly reduced to controlling the main cities and towns.

Contrary to the belief of the Speaker of the House of Representatives, Fawad Aman, Deputy Spokesman of the Ministry of National Defense of Afghanistan, said:

“Our security and defense forces, which come from different ethnic groups in the country, are a legitimate force that works to defend the lands and protect the lives and property of the people, and after the withdrawal of NATO forces, they will not allow any terrorist group to disrupt the country's security. Since our defense forces are made up of all the compassionate tribes of this land, we believe we are not heading for a civil war.”

Although Aman expresses confidence that the Afghan Army will be able to establish a peace and defeat the Taliban and other terrorist organizations, regional player India does not share this sentiment. Indian Chief of Defense Staff, General Bipin Rawat, said on Thursday that a “space for other disruptors” who are “looking at the opportunity to exploit the vacuum […] is being created. Afghanistan is a nation which is rich in resources.”

Despite the confidence that many in the Afghan government are portraying, the reality is that the U.S.-NATO withdrawal will lead to a rapid escalation in Taliban insurgency that the national army will struggle against. This will inevitably lead to a proxy struggle as China, India, Pakistan, Russia and Iran will all vie for influence in a post-U.S. Afghanistan in the hope of being able to exploit the $3 trillion worth of mineral wealth in the country.

It is likely that India and Iran will vehemently back the Afghan government’s preservation to prevent a radical Sunni Islamic Emirate from being established as it can pose a major security threat. In turn, to weaken Indian influence in Afghanistan, Pakistan will likely continue its ardent support for the Taliban.

As U.S. Chairman of Senate Armed Services Committee, Senator Jack Reed, said on the Senate floor on Thursday, the “crucial factor contributing to the Taliban's success” has been the U.S.' inability to “eliminate the sanctuary the Taliban was granted in Pakistan.”

By using the Taliban, Pakistan hopes to eliminate any Indian economic and diplomatic influence in Afghanistan. In this way, Afghanistan will undoubtedly become a field for competing rivalries.

Russia and China will also try and assert their influence over Afghanistan, but will likely deal with any government that emerges in a post-U.S. Afghanistan. But they will certainly not want the country to become a proxy battleground between India (and perhaps Iran too) and Pakistan. Sun Qi, an international relations specialist at the Shanghai Academy of Social Sciences, believes that Beijing will not station troops in Afghanistan, but might instead work with other countries in the region to promote political stability and reduce the security risk to China that a post-U.S. Afghanistan will pose.

It took the U.S. 20 years to finally withdraw from Afghanistan, having achieved nothing but the utter destruction of the country and leaving behind it a vacuum that will undoubtedly not only lead to a civil war between the Taliban, other terrorist organizations and the national army, but a proxy battle between key regional states.
Source