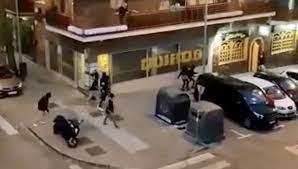 A battle between rival gangs in Madrid, Spain, was captured in harrowing footage on Thursday night.

Members of Dominicans Don't Play (DDP) and the Trinitarios engaged in armed warfare in the Pueblo Nuevo neighborhood of the Ciudad Lineal district, according to local media.

Video shot by a resident was shared to social media.


"Shooting in Linear City (Madrid) among young Latinos and North Africans," wrote Rubén Pulido, head spokesman for Spanish nationalist-populist party VOX. "The images are from 9:30 p.m., according to the first police information, it was a settling of scores. Cultural enrichment."

"The confrontation has been between the Latin bands Dominican Don't Play and Trinitarios. They started punching, sticking, and using bolomachetes. Until a member of the DDP drew his weapon. He has a record, just got out of jail."

Photos of the aftermath show multiple cars that had apparently been struck by stray bullets during the shootout.

"We will not allow in Madrid, or anywhere in Spain, for criminals to continue to impose their violence," VOX party President Santiago Abascal said regarding the incident. "We will expel the illegals and foreigners who commit crimes. Let's take back our neighborhoods."

Tens of thousands of migrants have been flooding into Spain and its territories in recent years, bringing with them a surge of violent crime and ethnic conflict.
Source