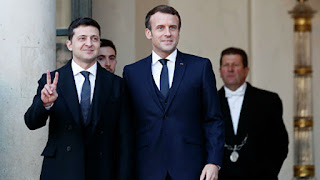 Ukrainian President Volodymyr Zelensky returned to his country after a failed tour of Paris that did not secure the full support of Europe. Neither the French head of state, Emmanuel Macron, nor the German Chancellor, Angela Merkel, promised Zelensky military support following their meeting on Friday.

Zelensky was likely aware that he was not going to get what he had hoped for, but nationalist pressure in Ukraine forces him to engage in fruitless efforts. At least for the purpose of public opinion, he must be seen frequently contacting NATO and the European Union under the false idea that Ukraine is on the path for membership into these multinational organizations.

However, the French and German positions are very clear: they are not going to make any effort towards Ukraine's far off, if ever, entry into NATO. Macron justified his non-support under the guise that it must be a unanimous decision between NATO’s thirty members, something that is unlikely ever going to occur. The majority of Europe, with the exception of Poland and the Baltic states, is not interested in being militarily entangled in Ukraine against Russia. This of course does not negate that Europe will diplomatically and rhetorically support Ukraine against Russia, but there won’t be European troops setting foot in Donbass. In any case, France and Germany already said on multiple occasions that Ukrainian NATO membership is a red line for Moscow that they are not willing to cross.

Although Zelensky was likely aware that he was not going to achieve anything during his visit to Paris (Merkel participated in discussions virtually), he knows that other international players are more interested than the Europeans in supporting his country’s anti-Russia campaign. President Joe Biden confirmed the “United States' unwavering support for Ukraine’s sovereignty and territorial integrity in the face of Russia's ongoing aggression in the Donbas and Crimea” and promised assistance in reform processes that are “central to Ukraine's Euro-Atlantic aspirations.”

Since then, Western media has overhyped Russian troop movements within their own territory to justify the need to activate U.S. military forces in Europe. This is to promote the idea that Ukraine's protection against alleged Russian aggression hinges on its involvement in the Atlanticist military alliance.

Biden’s provocative tone towards Russian President Vladimir Putin, Washington’s financial and diplomatic sanctions against Moscow, and the strengthening of U.S. military personnel in Eastern Europe provides the justification for Ukraine’s accelerated pathway into NATO. U.S. Secretary of State Antony Blinken, the Chief of the General Staff Mark Milley, and Secretary of Defense Lloyd Austin have all said that there is a crisis in Ukraine. Jens Stoltenberg, the notoriously Russophobic NATO Secretary General, added to these voices by demanding Russia to “end this military buildup in and around Ukraine” and to “stop its provocations and de-escalate immediately.” This is despite the fact that Ukraine was the first to start mobilizing tens of thousands of troops and heavy military equipment on the Line of Contact separating the Ukrainian military from the Donbass militias.

Zelensky, who began his mandate with a supposed desire to resolve issues with Russia, has been bending to pressure from nationalists who interpret any attempt of negotiations as a concession. With the country’s health and economic situation worsening, and the president’s consequent loss of popularity, it is not surprising that the Atlanticist argument comes to the fore again. This of course is with the help of Biden who, already second to Barack Obama, made Ukraine one of his favorite travel destinations, and not just to support his son’s businesses.

In his efforts to obtain foreign support, especially as the European are mostly disinterested, Zelensky's meeting with Turkish President Recep Tayyip Erdoğan - who does not recognize Russian sovereignty over Crimea - provides an alternative that could bring him diplomatic and arms support. Russian Foreign Minister Sergei Lavrov said last week that Moscow “strongly recommends” Turkey and other countries to “analyze the situation and the Kiev regime's constant belligerent statements, and we also warn them against encouraging these militaristic aspirations.” Although Turkey sells war drones to Ukraine, does not recognize Russian sovereignty over Crimea, and claims the Crimean Tartars are persecuted, it remains to be seen whether Turkey is willing to antagonize Moscow further.

Therefore, it is likely that tensions will continue in the coming weeks and months because of the Defender Europe 21 NATO military exercises, and Russia’s upcoming Zapad (West) 21 exercises in Belarus. None-the-less, Zelensky has found out the hard way that the major European Union powers are not interested in military engagements on the continent and will limit their role to diplomatic support, and perhaps even impose further sanctions against Russia if conflict breaks out. This leaves the U.S., a continent away, as Ukraine’s main ally, besides European minnows like Poland and Lithuania.
By Paul Antonopoulos, independent geopolitical analyst
Source