French generals calling for military coup “to save France” 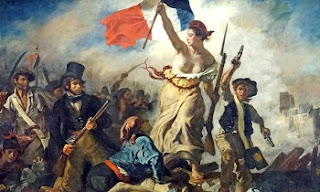 The advanced state of Islamist radicalism in France is a fact known and admitted by all European society. President Emmanuel Macron himself, known for his liberal and progressive speech, has implemented measures against Islamic communities, trying to prevent the advance of Muslim leaders interested in fomenting separatism in the country. Macron's opposition to Islam structurally changed the French political landscape, as it caused the president to adopt almost the same discourse as the radical opposition led by Le Pen, generating curiosities and uncertainties for the next elections. However, a new possibility has recently emerged in Paris, threatening the existence of French democracy itself.
About 1,000 members of the Armed Forces, including 20 reserve generals, signed the joint document, which blames radical Muslims for creating divisions between communities, saying that that Islamists are taking over entire regions on French territory. The open letter was published in a right-wing magazine on April 21, the date of the 60th anniversary of a failed coup d'état in the country, which at the time was trying to overthrow then-President Charles de Gaulle. The military emphasized the severity of the growth of extremist communities and said that "France is in danger" and "needs to be saved.

The military warns the French president, his ministers, and parliamentarians about the risk of civil war - and even more emphatically a racial civil war - that can arise at any time in the country from the poor districts, which have been completely taken over by extremist religious who refuse to obey national laws and live under the rules of their own religion. The military blamed the French elite's radical anti-racism for the advance of the extremists. Such anti-racism would be France's ceaseless quest to "please" immigrants, allowing them to live under their own rules, omitting the supervisory power of national law over these communities and complying with all the demands of Muslims.

The military concludes that the democratically elected government is being inefficient in handling the problem and calls for a quick and immediate attitude. To do so, they call for military intervention to combat Islamic radicalism, prevent civil war and restore order in the country. The document received strong support from Marine Le Pen, who will be a candidate for president in the next elections, which shows that, for the military to achieve their goals, a coup d'état will not be necessary.

On the part of progressives, the document was severely criticized. Neutrality and loyalty are basic principles of the French armed forces, which are completely prohibited from political involvement. However, how can the government demand from the military such an attitude of respect for the rules and, at the same time, maintain a posture of tolerance in relation to the constant violations of national laws by radical Muslims? This is an unsustainable impasse and shows a diagnosis already pointed out by some experts previously: the growth of Islamist radicalism in France will invariably lead to the growth of the far right.

Certainly, the military involved in the publication of the letter will be punished in court for inciting the politicization of the armed forces. However, the more repression of the French demand, the more these calls and actions will be expressed at the polls in the next elections - and the military already has a candidate: Marine Le Pen.

A victory by Le Pen could simply mean a total turn to the right, but without shaking institutional democracy. Now, with military calling for an intervention and receiving support from Le Pen, her hypothetical victory could represent a serious change in democracy.

Macron may try to neutralize this threat by accusing Le Pen of conspiracy along with the military and launching a campaign to make her ineligible, but it would have an impact on the streets of Paris, with thousands of Le Pen supporters and the military crying out for change.

So, it seems that the French government is facing a major challenge and will not come out of it easily. The measures taken by Macron are few, inefficient and were taken too late. The growth of Islamic radicalism is real, and the military's claim is simply reflecting the wishes of the French people, who do not want to have their stability threatened by immigrants - many of them illegal.

If changes had been made previously, the scenario could have been different. The radical anti-racism institutionally adopted by the government is an unsustainable policy, because instead of seeking conciliation between French and immigrants, it overrides the interests of immigrants over the French. Contrary to such radicalism, the far right arises. One side will lead to civil war, the other to a dictatorship.
By Lucas Leiroz, research fellow in international law at the Federal University of Rio de Janeiro.
Source