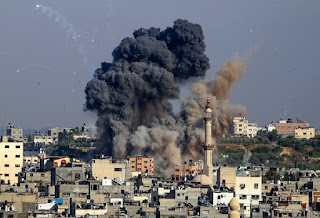 The violence in the Israeli-Palestinian conflict has been escalating amid a Palestinian humanitarian crisis that has generated a lot of support for Palestine worldwide. In the early hours of Wednesday, the Israeli bombing of residential buildings in the Gaza Strip went on, destroying several homes. On Tuesday night, 52 Israeli aircrafts carried out about 120 raids on the Gaza Strip for 25 minutes non-stop. In Palestine, buildings, roads, and other infrastructure have been destroyed.
Both the violence and the war rhetoric have been escalating for over 10 days and there seems to be no indication whatsoever that a ceasefire could happen - Israel has stated it has not set a timeframe for ending hostilities. Israeli Prime Minister Benjamin Netanyahu even said he does not rule out a campaign to "conquer" Hamas. Energy Minister Yuval Steinitiz echoed Netanyahu's statement, by saying that there "will be no way to avoid temporarily taking over Gaza'' to disarm Hamas. The Israeli Defence Forces (IDF) have been trying to assassinate top Hamas officials, including military chief Muhammad Deif. Others have been injured, but survived. Many experts believe things can escalate into a third Intifada.

Pro-Palestine protests are taking place in several cities worldwide, including Paris (even after the French government banned such demonstrations), and the United Nations have urged for greater aid access for Gaza and for extra mediation efforts. The French mission to the UN even circulated a draft resolution (to members of the Security Council) urging a ceasefire. The French President Emmanuel Macron had a trilateral meeting with his Egyptian counterpart Abdel-Fattah el-Sissi and with Jordan's King Abdullah II on Wednesday. The three agreed that the time has come for a ceasefire and that the UN Security Council should take up the issue. The US President Joe Biden, however, sticks to his support of Israel, clearly contradicting his own “human rights” agenda.

All of this takes place at a time when there is an internal political crisis in Palestine itself, involving the secular Al-Fatah party of the Palestinian Authority president Mahmud Abbas and Hamas. Because Israel refused to guarantee voting in east Jerusalem annexed by Israel, Abbas cancelled elections that were scheduled for this weekend. Hamas denounces that as a coup and is currently trying to establish itself as the true defender of Palestine. On Monday, at least six rockets were fired from Lebanon at Israel all of which landed in the sea. It is still unclear who was behind the attack. But it is well-known that Hamas is backed by Iran and has always counted on Iranian support.

Things have been tense in the Levant for a while. Syria is recovering from the war and Lebanon, in its turn, is currently weakened and divided over the Israeli issue amid an economic crisis. New US sanctions against Hezbollah were announced on May 11.

The escalation of violence in Jerusalem started on May 10, during the Ramadan, when Palestinian groups demanded that Israel security personnel leave the Al-Aqsa mosque compound. This is Islam’s third holiest site and a holy place for Christians also. Israel is also blocking access to the Church of the Holy Sepulcher which is an insult to the religious freedom of Muslims and Christians too. Patriarchs and heads of churches in Jerusalem have condemned this actions.

With the recent reconfiguration of the Middle East political map, Palestine had been, in a way, left out of the chessboard, as some Arab countries have been getting closer to Israel. While Iran has always maintained its support for Palestine, many Arab states in fact signaled Tel Aviv was no longer their main concern but rather Iran itself and Turkey. However, now the conflict has the potential to make Palestine a hot topic for a long time again, and this is already happening. Even countries that signed agreements with Tel Aviv are facing popular demonstrations in support of Palestine.

Even in Jordan which has normalized its relations with Israel in 1994, hundreds of Jordanians last Friday protested near the border with the Palestinian occupied territories, waving Palestinian and Jordanian flags. The demonstrations were broken by Jordanian security forces when protesters came way too close to the border. We can expect the same to happen elsewhere in Arab countries. A lot of criticism against Israel has been voiced by many in Egypt, and in the Gulf states.

If further damage is made or attempted against Al-Aqsa, many different rival Islamic groups worldwide could, in the most extreme scenario, unite in a kind of global Jihad against Israel in defense of Al-Aqsa. This could seem too far-fetched but the current circumstances may really make it possible.

Right now, Shiite Iran and Sunni Saudi Arabia, which historically have been arch-enemies, are working together towards a peace deal. Such an event can dramatically change the geopolitics of the region because the two nations exert the greatest influence on other Islamic countries. One should also keep in mind that Saudi Arabia did not follow the path of the UAE and has refused to sign an agreement with Israel.

If Riyadh and Teheran manage to solve their differences, they could both lead a kind of Islamic coalition against Israel - and of course this in its turn could generate further polarization in the Middle East and thus more regional instability. Turkey too aspires to play a role of leadership in the region and has been trying to lead global Islamic condemnation against Tel Aviv.

Netanyahu’s strategy thus seems to have failed and contrary to what many observers expected, the Palestinian cause has once again become a popular and emotional issue in the Middle East and the whole Arab world.
By Uriel Araujo, researcher with a focus on international and ethnic conflicts.
Source