Israeli/Gaza conflict being fought on the U.S. House floor 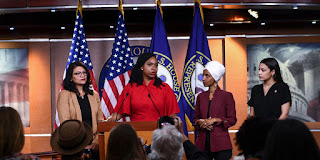 Last week was a bad one for President Biden. Powered by a year’s worth of pent-up demand and runaway money printing, inflation has topped 4%. The border remains in crisis with 178,000 illegal aliens apprehended in April. Hackers shut down the Colonial Pipeline causing gas shortages in the American south reminiscent of the 1970’s oil shocks. Ironically Biden posed for a rather odd photo with former President Jimmy Carter, who presided over late 1970’s stagflation, whereby the economy stalled but prices rose anyway.

Then last week the Centers for Disease Control changed its Covid guidelines and declared masks were no longer necessary indoors for those vaccinated. The mask mandate remains here in New Jersey, even though neighboring New York and Pennsylvania have lifted their mandates. ‘We're not ready yet. We've been clobbered not once, but twice’ Governor Phil Murphy told CNN. As of this writing the state’s infection rate is 0.50. Any number under one means the infection is slowing.

The mask has become a political issue. Despite the new CDC guidelines, House Speaker Nancy Pelosi says masks are required on the House floor. On Wednesday, several Republican representatives defied the order and went on the floor sans mask. Pelosi fined each $500.

As Israel and Hamas hammer away at one another, pro-Israeli and pro-Palestinian House members do the same in Congress. The Democrat Party has traditionally been supportive of Israel, but that’s changing with the rise of the young sophomore representatives, nicknamed The Squad by President Trump. ‘Squad leader’ Representative Alexandria Ocasio Cortez of New York called Israel an ‘apartheid state’. Representative Rashida Tlaib of Michigan, herself of Palestinian origin, accused Biden of ‘taking orders’ from Israeli Prime Minister Benjamin Netanyahu.

Biden later thanked Tlaib for ‘being a fighter.’ The infamous Representative Ilhan Omar of Minnesota, who once said American support of Israel was ‘all about the Benjamins’, meaning money, tweeted, ‘Israeli air strikes killing civilians in Gaza is an act of terrorism…Unlike Israel, missile defense programs, such as Iron Dome, don’t exist to protect Palestinian civilians.’ Representative Cori Bush of Missouri, who gained notoriety a few weeks ago by referring to pregnant women as ‘birthing people’, compared Hamas and the Palestinians to the Black Lives Matter movement and said on the House floor, “We oppose our money going to fund militarized policing, occupation and systems of violent oppression and trauma. We are anti-war, we are anti-occupation and we are anti-apartheid, period.”

In support of Hamas, The Squad and other leftwing members of Congress are pressuring the Biden Administration to cancel the sale of $735 million worth of JDAM bunker busting bombs to Israel. House Majority Leader Steny Hoyer of Maryland and Foreign Affairs Committee Chair Gregory Meeks of New York stand by the sale. That being said, President Biden is urging Netanyahu to ‘wind down’ operations and told him during a Wednesday phone call that he ‘expects significant de-escalation today.’ On Tuesday House Democrats blocked the Republican proposed Palestinian International Terrorism Support Prevention Act on a party line vote, 217-209.

Not all freshman Democrats stand with the Squad. This observer has mentioned Arizona’s freshman senator Krystin Sinema before. She comes off as a flaky and inappropriately dressed high school art teacher. Sinema is regularly bucking the party. A few months ago she cast the deciding vote against a $15 minimum wage. Coming from a state on the Mexican border, Sinema is critical of Biden’s handling of the border crisis. This week she released a statement beginning, ‘I strongly support Israel’s right to defend itself from terrorist attacks.’

Meanwhile they finally drove old Liz Cheney down. In an overwhelming voice vote, the House GOP caucus removed Cheney as caucus chair. No one spoke in her defense. Cheney will probably lose the GOP primary for Wyoming’s lone congressional seat next year. Probably but not definitely. The Cheneys are big in the Cowboy state. Liz Cheney will certainly have a place at CNN in 2023.

Perhaps Cheney can find a home with the new political party as a band of GOP operatives and former office holders are forming. In a letter published in the New York Times titled ‘Radicals versus Rationals’, more than a hundred Establishment types ‘threatened’ to break away from the GOP. The group includes former governors from the 1990s that no one under 40 remembers, GOP strategists and cabinet heads. Mary Peters, Secretary of Transportation under George W. Bush, is probably not a big draw.

With Cheney out, the House Republicans made Representative Elise Stefanik of New York caucus chair. There began a silly argument over her voting record. Partisans (probably Cheney’s people) pointed out that Stefanik had only voted with Trump 72% of the time while Cheney voted with Trump 95% of the time. Stefanik represents a more moderate district in upstate New York. Whatever her voting record, during the Democrat’s first impeachment of President Trump Stefanik fought back against the media narrative, asked tough question during the impeachment hearings, and made herself a rising star.
By William Stroock, commentator, author of military fiction.
Source