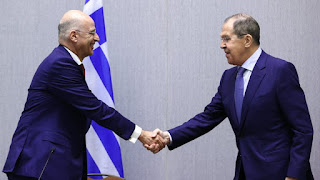 “Greece is one of the most significant partners of the Russian Federation in Europe.”

This was said by Russian Foreign Minister Sergey Lavrov in a joint press statement with his Greek counterpart Nikos Dendias following their meeting in Sochi on May 24. Although Lavrov conceded that Russian-EU relations are “not going through the best of times,” he did say that “we are very happy with the [...] fact that our Greek partners are willing to promote further bilateral collaborations in several sectors.”

Since the accession of the Kyriakos Mitsotakis administration in mid-2019, Athens said on numerous occasions that it wants to improve its relations with Moscow, going against mainstream European Union consensus. This culminated in a flurry of bilateral contacts. Monday’s meeting between the two foreign ministers was their fourth since 2019, and also comes off the back of Russian Prime Minister Mikhail Mishustin's visit to Greece in March, and the visit of Greek Tourism Minister Harry Theocharis and Greek Civil Protection Minister Nikos Hardalias to Russia in recent weeks.

For his part, Dendias said “It is the Greek government's wish that the relationship between the EU and Russia returns to the level it was and not get worse as Russia is an inalienable part of the safety architecture of Europe and plays a significant role in dealing with regional and international challenges.”

However, for all these niceties, the fact remains that Athens is sending mixed signals to Moscow.

Although the administration of Prime Minister Mitsotakis says it seeks closer relations with Moscow, simultaneously the U.S. military footprint has rapidly consolidated itself in Greece. The U.S. recently assumed control of the naval base at Souda Bay in Crete and the strategically located port of Alexandroupolis in northern Greece, close to the Turkish-controlled Dardanelle Strait that connects the Mediterranean to the Black Sea.

The Greek Defense Ministry, according to media reports circulating in Greece, has a list of 22 locations for the U.S. to choose from to expand their network of military bases in the country. Reportedly, the most favored bases are the 117th Combat Wing in Andravida, western Greece, and the Aegean island of Skyros, which can support both air and naval bases.

In addition, Belarusian opposition figure Sviatlana Tsikhanouskaya spent several days in Greece earlier this month to participate in the Delphi Economic Forum – this was at the invitation of Dendias. From there she secured the support of Greece against Belarus’ long-time President Alexander Lukashenko. Whilst in Greece, she also met the anti-Lukashenko faction of the Belarusian community, met with the President of North Macedonia and thanked him for his country's imposition of sanctions against Belarus, and also met with Donald Tusk, President of the European People's Party, the largest political faction in the European Parliament.

Roman Protasevich, the Belarusian regime-change operative who once worked for the media arm of the Ukrainian neo-Nazi Azov Battalion militia, also accompanied Tsikhanouskaya to Greece. He described the trip as “insanely cool.” However, following his arrest days ago, in what commentators describe as state piracy after a Belarusian fighter jet forced a Ryanair flight from Athens to Vilnius to land in Minsk, Greece strongly vowed to pursue sanctions against Belarus.

Although Athens stresses that its bilateral relations are not aimed against third parties, its policies regarding Belarus would be catching Moscow’s attention since it strongly imposes its view and position on an issue outside of its immediate geographic location and interest – and directly on Russia’s border.

There is also unease in Greece because of the Akkuyu Nuclear Power Plant being constructed in Turkey’s south by Russian firms, which many believe will then be used to produce nuclear bombs in the future. This is one example, from the Greek perspective, that diminishes Russo-Greek relations. However, Moscow justifies the fear-provoking nuclear project as a matter of bilateral relations that is not aimed against third parties, and it is with this attitude that Athens is also moving ahead in its claims to improve relations with Moscow, whilst pursuing a policy against Belarus that might not be in the interests of Russia.

But when it comes to matters of Greek and Cypriot sovereignty, Moscow has in fact come out stronger in defense of international law against Turkish revisionism then the likes of fellow European Union member Germany. It is for this reason that Dendias thanked Lavrov on Monday for Russia's continued support for United Nations resolutions against Turkey’s continued occupation of northern Cyprus, in addition to continually highlighting Greece's legal right to extend its Exclusive Economic Zone to 12 nautical miles (currently at six), despite Turkey's threats of war if Greece were to do this.

Although Greece claims the bolstered U.S. military presence on its territory is to increase the security of the country from external aggression (i.e. Turkey), decisionmakers in Athens are not naïve and fully understand that the U.S. is establishing Greece as a contingency plan in case Turkey goes rogue from its NATO responsibilities in any potential war with Russia.

Athens for now has successfully managed to balance its relations with Washington and Moscow without publicly frustrating either side. How long this can be maintained is questionable if the Biden administration embarks on a campaign of maximum pressure against Russia. By claiming to want closer relations with Russia but simultaneously bolstering the U.S. military presence in Greece and involving itself in the affairs of Belarus, Athens is sending mixed signals to Moscow. Russia for now will continue being friendly to Greece, hoping that “as a significant partner of the Russian Federation in Europe,” it can convince the European Union to change course in its relations with Moscow – but Moscow’s attitude towards Athens will certainly remain cautious.
By Paul Antonopoulos, independent geopolitical analyst
Source