Moody’s highlights that U.S. was biggest loser in trade war with China 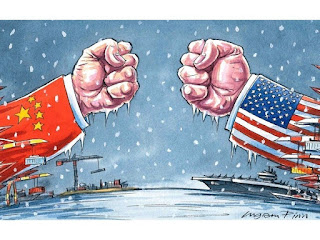 According to a report by credit rating and risk assessment company Moody’s Investors Service, more than half of U.S.-China trade flows are subject to tariffs. Much of the cost burden American businesses deal with is caused by Washington’s high tariffs against China. Because of this, U.S. importers have shouldered more than 90% of the cost incurred by Washington on Chinese goods.
During Donald Trump’s presidency, the U.S. waged a trade war with China. Initially, Trump imposed tariffs on Chinese products, citing the need to balance the trade deficit. Later, however, Washington used the tariff as a lever of pressure in many controversial economic and political issues. At the height of the trade war, virtually all Chinese exports to the U.S. were subject to tariffs of 10% to 25%.

Beijing cannot respond symmetrically to the U.S. tariff war because of the trade deficit. Instead, Beijing imposed retaliatory tariffs on key U.S. exports to China - primarily energy and agricultural products. According to Beijing, the imposition of retaliatory tariffs will make it difficult for American farmers, who traditionally vote for conservatives, to export more than half of their produce.

Ultimately, Trump agreed to repeal or cut some of the tariffs and in return China pledged to increase purchases of American agricultural and energy products. However, according to the Moody’s report, more than 60% of Chinese goods exported to the U.S. are still subject to increased tariffs. Although President Biden openly criticized the policies of the Trump administration, he has not ended confrontations with China in the areas of tariffs and technology.

Much of the cost of the tariffs has been imposed against U.S. importers, Moody's said. Currently, U.S. importers have to pay about 18.5% more for Chinese goods, while the revenue collected by Chinese exporters is only 1.5% more per product. This is because the U.S. cannot find an alternative to many of the Chinese goods subject to the tariffs.

The opposite is true in China as U.S. goods subject to tariffs are mainly raw materials and agricultural products that can be sourced from elsewhere, such as Brazil or Russia. The Moody's report concluded that tariffs imposed by the Trump administration on China have harmed the U.S., especially as China easily found alternative sources.

In response to the COVID-19 pandemic and the economic crisis caused by it, Washington concluded a record-high stimulus package to support the economy. This saw dollar bills be printed into circulation. Such a policy can cause high inflation though, and for this reason U.S. authorities restrained price increases on essential commodities. However, tariffs on imported goods are another factor driving prices up. Ultimately, Washington will have to adjust its China policies to the new realities.

However, when it turns to high technologies, the U.S. still maintains an advantage over China, especially as the East Asian country is heavily dependent on the purchase of high-tech American goods. Last year, amid concerns about new U.S. restrictions, Chinese companies started hoarding chips, bringing the total amount of Chinese chip imports to $380 billion. Naturally, restrictions on access to American components and technology will create problems for the development of Chinese industry, but, American companies working with China will lose out. For example, Huawei alone buys components from U.S. companies totalling more than $10 billion a year. These funds can be spent on new Research and Development to increase the competitiveness of their own domestic products. Without these funds, American companies could eventually lose their competitive edge.

The U.S. Senate approved a program to invest $100 billion over five years to develop key technologies in which the U.S. competes with China. The money, as expected, is earmarked for basic research in the areas of artificial intelligence, quantum computing, chip manufacturing, biotechnology and new energy sources. Scepticism about the program remains though – after all, historically, all innovation in the U.S. has been primarily driven by private business and market principles. However, even assuming that the U.S. is using a Chinese solution to support the largest corporations in the country, the scale of this program is still not up to the task, especially when considering China plans to spend $1.4 trillion on the development of new infrastructure by 2025.
By Paul Antonopoulos, independent geopolitical analyst
Source