Myanmar crisis may evolve into proxy war between US and China 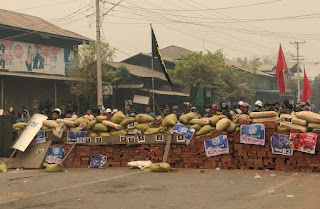 Although other conflicts and crises have taken greater attention in the international media in recent days, the situation in Myanmar is getting worse. What started with a takeover by the military has become a constant clash between pro-government forces and pro-democracy militias. At the international level, the military receives Chinese support, and the dissident militias are backed by the West. Several clashes have been reported, mainly in the northwestern Mindat region, near the border with India and Bangladesh. The most active dissident group is the Chinland Defense Force, which has carried out several attacks against government forces.
Anti-government insurgent fighters recently occupied the city of Mindat, in Chin state, causing serious damage to public order in Myanmar. In the last week, attacks on banks and police stations have been reported, which left dozens of victims - the numbers are still uncertain. After the events, the government declared martial law in the region and started a strong military campaign to retake the city, which involved extensive troop movements, war equipment, and artillery operations. On Sunday, after intense fighting, the rebels retreated and the government resumed control of Mindat, but the clashes continue.

Interestingly, shortly after the resumption of Mindat, the West made international calls for peace in the country. The US and the UK have asked the military government to exercise caution and avoid civilian casualties. The parallel government, made up of supporters of former leader Aung San Suu Kyi, appealed for international aid, emphasizing the violence used by the government to fight the rebels. But international society do not pay attention to the violence used by the rebels, who act using guerrilla techniques in urban areas, setting cars on fire, attacking police stations, blowing up banks and buildings. Part of the social chaos and civilian fatalities are the fault of the rebels themselves, who, unable to face the government on a regular and symmetrical way, resort to vandalism, generating many victims. Even so, the West's international appeal is directed exclusively to the new government, condemning the use of weapons against "civilians" - ignoring the fact that such "civilians" are now armed rebels and supporters of a parallel government.

Almost 1,000 people have died in clashes in Myanmar since the beginning of the military government. Contrary to what the Western media reports, what is happening there is not a systematic extermination of protesters by government forces. The protesters were never peaceful and always appealed to vandalism, demanding tougher attitudes from the police and the military. More than that, opposition to the government has evolved from a disorderly set of militias to a dissident armed force, the so-called People's Defense Force (PDF), which was officially founded in early May as an armed branch of the National Unity Government (NUG), the parallel government formed by politicians and supporters of the former democratic regime. PDF has unified all anti-government militias into a single armed force. Among PDF’s militias, the strongest is the Chinlad Defense Force, which is engaged in the clashes in Mindat. In fact, a scenario of extreme polarization is taking shape in Myanmar, where on the one hand are the federal government and its armed forces and on the other hand the parallel government and the PDF with its numerous armed militias.

More than an internal polarization, the crisis in Myanmar shows signs that it will evolve into a direct confrontation of international interests. Myanmar is part of the Chinese continental influence zone, but it is an area disputed by the West due to its historical ties with the UK. Also, the West is interested in the strategic location of Myanmar, as dominating this country will make it possible to toughen up US encircling strategy against China.

As we know, Myanmar’s democratic government had ties to the West, while the current military junta maintains relations with China. Within the United Nations, Western powers have already proposed several sanctions against the military government, which China has blocked. If the situation continues to worsen and the escalation of violence becomes constant, the case will evolve from a social and humanitarian crisis to a total civil war and, consequently, what has been veiled international support, limited to appeals and sanctions will certainly evolve into open interventionism.

The crisis in Myanmar is on the verge of becoming not just a brutal civil war, but a proxy war between China and the US. Since an open confrontation between these two powers is impossible, the tendency is for both countries to test their military capabilities in parallel conflicts, and this may be close to happening in Myanmar. In this scenario, PDF’s militias will receive financial, logistical and material support from the US, the UK and other Western nations to confront government forces, supported by China, which will be a serious humanitarian catastrophe.
By Lucas Leiroz, research fellow in international law at the Federal University of Rio de Janeiro.
Source