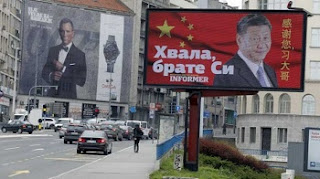 The reconstruction of a railway line from Belgrade to the border of North Macedonia, with the support of the EU, will assist in Serbia’s transformation into the Balkan’s main transportation and energy hub. Coupled with the anticipated Chinese-funded canal network from Thessaloniki to the Danube River close to Belgrade, Serbia is positioning itself as an indispensable part of the Belt and Road Initiative’s penetration into the Balkans and Central Europe, radically changing the geopolitics of the region.

With the expectation that the railway link will eventually extend beyond North Macedonia to reach Greece’s northern port city of Thessaloniki (considered the maritime gateway to the Balkans), the revitalization of a railway line would see Serbia become a true transportation (and energy) hub as it is the closest, fastest and natural route to the heart of Europe.

Immediately after European Commission President Ursula von der Leyen’s conversation with Serbian President Aleksandar Vučić on Monday, she wrote on her Twitter account, among other things, that they talked about a railway connection between Belgrade and North Macedonia - which the EU is ready to support. Thus, she removed doubts about one of the largest infrastructure projects that will change Serbia.

With the reconstruction of railway between Belgrade and the North Macedonian border, Serbia will inevitably become a transportation hub because the route from Thessaloniki to the heart of Europe will be shortened by 300 kilometres compared to the already existing railway lines. Although there is no specific information yet, it can be expected that the construction will not just be a revitalization of the existing disused railway line, but a new high-speed link akin to what is already being constructed on the Belgrade-Budapest stretch. It would then likely extend through North Macedonia to reach Thessaloniki.

After talks with EU officials, Vučić expressed his expectation that an agreement will be signed with officials from Brussels soon, according to which the EU grant will amount to €600-700 million, i.e. between 35-50% of the value of the railway investment. According to Vučić, Serbia will be transformed into a different country with the high-speed railway link, dubbed Corridor 10, because it will create new opportunities thanks to better transportation connections for those who travel to/from Munich, Vienna, Sofia, Istanbul, Skopje and Thessaloniki.

Railways are an ideal type of transportation when you need to move large quantities of goods and appears to be the most feasible option. It would also be of particular interest to the Chinese who are already exploring new methods to shorten transportation time from the Mediterranean to Central Europe.

China is considering an ambitious, but feasible, $17+ billion project that would connect the Danube River, Europe's second longest river after the Volga, with Greece's Aegean coastline via a new canal that would also utilize the Morava and Vardar/Axios river systems. Not only is Belgrade located on the Danube, but also the capitals of Austria (Vienna), Hungary (Budapest) and Slovakia (Bratislava), along with other major regional centers. Although Chinese cargo chips already reach the Danube via the Black Sea entrance in Romania or Rotterdam in the North Sea, a canal linking northern Greece to the Danube close to Belgrade will reduce shipping time to Central Europe by about three and a half days, thus saving China billions of dollars in shipping.

The canal project, along with a new railway link following the same vertical axis from northern Greece to Belgrade, would radically change transportation options in the wider region. Although Greece, North Macedonia and Serbia will greatly benefit from these two transportation projects, the biggest losers will be Turkey and Romania who in the coming years will no longer have millions of tons of cargo destined for Central Europe passing through the Dardanelle and Bosporus Straits and the Danube Delta. China’s drive to have as many transportation networks and options as possible ultimately benefits a region that has been mostly forgotten about in terms of development.

In this way, even if a railway connection between Thessaloniki and the Danube is constructed with EU funds, China benefits as it can access a new route to reduce transportation time to European markets by days. Although Turkey constitutes a major part of the Belt and Road Initiative’s land route, it does have determined plans to become a maritime power too. However, the eventual construction of a railway link and canal from Thessaloniki will be a major blow to this ambition as Turkey will be completely bypassed. Essentially, Turkey will remain a land-based power as it has traditionally and always been, while Greece, which already has the world’s largest commercial fleet measured in tonnage, will have more Asian cargo reaching its ports.

What is also for certain is that Serbia is consolidating itself as an indispensable part of Balkan developments and infrastructure projects. Although Kosovo remains volatile and unresolved, Serbia none-the-less will experience in the near future greater prosperity as it becomes more integrated into Balkan and European economic and transportation networks that link into China’s Belt and Road Initiative.
By Paul Antonopoulos, independent geopolitical analyst
Source