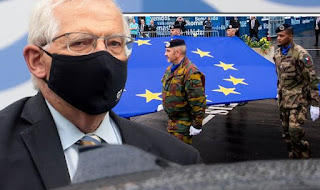 On May 5, Reuters reported that 14 EU countries, including Germany and France, proposed the creation of a 5,000-strong European Rapid Reaction Force. According to an unnamed senior EU official, the purpose of this military force is to “help democratic foreign governments needing urgent help.” In other words, the EU wants to demonstrate its status as a “Great Power,” something that can only be achieved through military might, which the European bloc does not have.

The 14 countries are Austria, Belgium, Cyprus, Czechia, Germany, Greece, France, Ireland, Italy, Luxembourg, the Netherlands, Portugal, Slovenia and Spain. These countries, with the exception of Cyprus, Czechia and Slovenia, are often considered the “core” states of the EU’s “Old Europe.” Although there are another 13 countries in the EU, they have not been pitched to comprise part of this European military force. Notable exceptions from the proposed European force were the Baltic States of Lithuania, Latvia and Estonia, as well as Poland – the most hostile countries in the EU against Russia.

The EU, led mostly by Germany, is undoubtedly an economic power, but lacks a force component to become a full-fledged global power center. Although some argue against the necessity of an EU military force because of the existence of NATO, it is recalled that the Transatlantic Alliance is led by the U.S. and cannot be an instrument for the establishment of an independent Europe. Although Germany tacitly supports the idea of ​​an EU army, it was developed primarily by France, who under President Emmanuel Macron is attempting to forge an independent path for Europe. This does not mean that Europe is divorcing from Washington, but it demonstrates an expressed desire of European independence from U.S. domination that has existed over half of the continent since World War II and most of the continent since the collapse of the Soviet Union.

However, the fact is that this concept is very difficult to implement for several reasons.

It is difficult for the EU to reconcile the interests of many different countries – such as the Baltic States desire for hostilities against Russia.

Also, there is a large bloc of countries - the so-called post-Soviet “New Europe”- that do not want real European military independence and prefer the continent’s military structures to remain within NATO command. The EU’s core states now recognize that “New Europe” is only interested in serving U.S. interests rather than pan-Europeanism. It is for this reason that the Baltic States and Poland will not be among the founders of the European military force despite supposedly being under threat from Russia.

In fact, this talk of a new European force with the exclusion of Poland and the Baltic States, comes as DEFENDER-Europe 21 drills are being performed on Russia’s borders. Although the majority of NATO is participating in some way or another in the exercises (such as allowing the use of ports and other logistics infrastructure like those in Albania, Croatia, Greece and North Macedonia), the majority of participating states have not sent troops or equipment to the Baltics or Poland where the largest and most aggressive exercises are taking place.

According to Lithuanian Minister of National Defense Arvydas Anušauskas: “The United States of America has not left Europe. All the more so in the last few years, their presence in Lithuania has been strengthened. And we can clearly see that.”

But what is also clearly seen is that Old Europe is mostly disinterested in hostilities against Russia, hence why the majority of NATO’s European members made the minimum contribution to the DEFENDER-Europe 21 exercises, with the U.S., UK, Poland and Baltic States making the greatest contribution.

However, as the Reuters publication and the meeting of EU defense ministers showed, the idea of ​​a European army is not dying and can become a hindrance to the defenders of transatlantic unity.

Although real European independence from the U.S. will be a long process, the fact that discussions on this are occurring in Brussels during the Biden era shows that the EU's relationship with Washington is not ideal. It is for this reason that the French are pushing a vision of strategic sovereignty for the bloc and advocates for a Europe that stretches from Lisbon to Vladivostok. The French are also breaking the decades-long belief that European security is inseparable from the U.S. and NATO.

But, despite these changes in vision and ideology in Europe, the Baltic States and Poland have been deemed untrustworthy to join the path of reconfiguring power structures on the continent. Insistent hostility by Poland the Baltic States makes most other EU members hesitant to join the U.S.-led initiatives to contain Russia. And in this way, we see the irony that the core states of the EU, which mostly corresponds with “Old Europe,” having fresh and new ideas in their vision for the future of the continent, whilst “New Europe” wants to maintain the outdated and redundant American unipolar order.
By Paul Antonopoulos, independent geopolitical analyst
Source