Teheran and Riyadh about to reach a peace deal 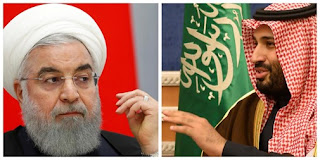 Several changes have been taking place in the Middle East in recent months. Since the wave of agreements between Arab nations and Israel emerged as a security measure against the Turkish advance, we have witnessed a real geopolitical reconfiguration of the region, with old alliances being broken and new partnerships, hitherto unimaginable, suddenly appearing. This became even more evident with the rise of Joe Biden in the US and the partial breakdown of relations between Americans and Saudis. Riyadh, which has always been a satellite of American interests in the Middle East, has suddenly been left without any ally amid constant regional threats. Many experts hoped that this would lead the Saudi Kingdom to seek to negotiate peace with Israel in search for a new alliance; however, it seems that Iran, not Israel, will be Saudi Arabia’s choice.

In the past few days, several media outlets have reported that Saudi and Iranian officials are talking secretly, discussing issues important to bilateral relations, and paving the way for a mutually beneficial peace deal. At first, it was just speculation and the newspapers reporting the case cited only anonymous sources from both countries. However, last Monday, the Iranian government confirmed that such negotiations are really happening. The officers delegated by both governments to operate the dialogue are professionals from the intelligence services, which indicates the priority in matters of defense and security in this approach process. The meetings have been taking place in Baghdad, the capital of Iraq, reportedly since last month.

Despite the secrecy of the talks, some topics were revealed, among them the war in Yemen, the pro-Tehran militias operating in Iraq and relations with the US. What was concluded from the debates is not yet known, but the importance of the topics already shows the possibility of real progress in bilateral diplomacy. There is, of course, a mutual interest in neutralizing rivalries for the sake of greater interests. Mohammad bin Salman had previously commented on his desire to improve ties with Iran with the aim of creating a positive alliance for the entire Middle East. In the same vein, Iranian Foreign Ministry spokesman Saeed Khatibzadeh said that Tehran is willing to ignore differences with Riyadh in favor of bilateral cooperation based on the principle of tolerance, which will bring peace and stability to the region.

Expectations for the negotiations are good, considering that both sides show interest in improving relations. Although the rapprochement does not necessarily mean a coalition in military matters or great economic cooperation, at least diplomatic relations seem to be close to being resumed, which is especially important for the political context of the region. Iran and Saudi Arabia are the nations with the greatest power of influence over Islamic countries in the Middle East and everything that concerns relations between these two countries has a strong international impact.

Some international factors are strongly favoring this dialogue. The diplomatic crisis between Washington and Riyadh initiated by Biden was not the only recent change in the geopolitical scenario of the Middle East. Adopting humanitarian discourse, several Western countries have banned their cooperation with Saudi Arabia, especially with regard to the military material trade. Virtually the entire European Union has stopped supplying weapons to the Saudis, who are increasingly suffering sanctions from their former allies. In practice, Saudis and Iranians are experiencing the same problem in relation to the West and this can unite them.

It is also necessary to consider the rivalry factor between Riyadh and Tel Aviv. In 2020, a wave of peace agreements between Arab nations and Israel began, mediated mainly by Washington. Saudi Arabia has refused to sign any agreement with Tel Aviv, contrary to the opinion of many experts who believed that the Kingdom would follow the path taken by the UAE and Bahrain. In fact, what motivated Arab nations to seek peace with Israel was the fact that they considered Turkey and Iran to be greater threats than the Zionist state. Saudi Arabia is an enemy of the Turks and Iranians, but it still does not recognize Israel as a "lesser danger" and, in the midst of these few choices, it opted for the most rational and strategic path: improving ties with Iran, a neighboring Islamic nation, which could mean a reduction in tensions with Turkey and, at the same time, strengthen an alliance against Israel.

Also, the recent unrest in Israel could change the scenario in the Middle East even more. Tensions between Israelis and Palestinians are reaching their highest point in years. Violence rates are really alarming. Israeli troops and far-right radical Zionist militias are not only acting with extreme brutality against Arabs during the protests, but also vandalizing holy sites for Muslims, such as the Damascus Gate and the Al Aqsa Mosque. All Islamic nations, Arab or not, are dealing with Israeli violence with strong disapproval and this tends to reverse, at least partially, the scenario of rapprochement between Arabs and Israelis that started last year. Indeed, as long as Israel maintains open religious and ethnic persecution against Muslims, the tendency is for tensions within the Islamic world to be eased, so that Turks, Iranians, Saudis, and all Islamic peoples unite in coalition against Israel.

In another scenario, if Israel reduces violence due to strong international pressure, it will be unlikely that Islamic nations will reduce their internal tensions and then we will have a polarization scenario in the Middle East, with some Arab countries following in the footsteps of the UAE and allying Israel and other countries following the Saudi path and approaching Iran. At the moment one thing seems certain: the Western plan to align Arabs and Israelis in an anti-Iran coalition, guaranteeing the regional dominance of Tel Aviv, already seems to be failed.
By Lucas Leiroz, research fellow in international law at the Federal University of Rio de Janeiro.
Source