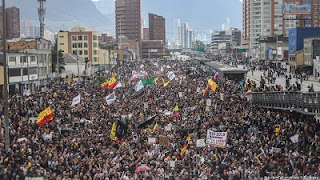 The crisis is getting worse in Colombia. Protests against the tax reforms have intensified and, at the same time, police violence in combating demonstrations has become increasingly brutal. The police were ordered to shoot at the population and several people died or were injured. The case is worthy of international attention as several violations of human rights are being committed by the government, but the central importance of Colombia as a nation allied to the US in South America makes the West ignore the crimes perpetrated there.

The wave of protests in Colombia began as a popular reaction to the proposed tax reform that aims to raise tariffs on basic products as a measure for tax collection in times of pandemic. However, the demonstrations quickly evolved to causes beyond the bill, covering various social, political, and economic demands of the Colombian people.

Regarding the bill, it is evident that there is something fair and consistent in popular demand. The tax reform was considered abusive because it allows a series of extreme measures to quickly recover the equivalent of 2% of Colombian GDP. The government and parliamentarians say the measure is necessary to sustain the various social programs implemented during the pandemic.

However, by imposing a systematic increase in taxes, raising tariffs on basic items of first necessity, the government is putting even more pressure on the population downwards in the social indexes, which directly contradicts the arguments in defense of social programs. It is impossible to combat social problems by demanding even more loss of income on the part of the poorest population. Tax reform for social purposes should be based on income, not consumption, which would impact the most favored classes and turn the money of the rich into social benefits for the poor. The fact that the Colombian government intends to impose a reform that harms the poorest sectors of society - albeit under social justifications - only shows that the real intention of the project is to try to balance public spending while preserving intact the benefits of the economic elites.

However, since the vote on the bill was suspended due to strong protests, the main reason for the demonstrations has changed. The biggest motive for the protests today is to respond to the brutal violence with which the police fight the protesters. Now, there is not only an economic interest, but also a demand for justice and punishment for human rights abusers.

The demonstrations started in the middle of last week. As the unrest grew, intimidation of the government increased, and extreme measures were taken. The police were ordered to fire on the protesters, which has resulted in 24 deaths and thousands injured. There are also about 100 missing people. This is a major humanitarian crisis.

The main focus of the demonstrations is Cali, mainly in the "Comuna 20" neighborhood, where the internet connection was blocked. There is a clear interest from Colombian authorities to prevent information about what is happening in the region from circulating around the world. Before the blockade, protesters were using social networks intensively to publicize the atrocities committed by the police, which included unreasonable use of force, murders, and torture.

In response to allegations of human rights abuses, President Iván Duque has stated that the escalation of violence is due to the fact that guerrilla groups and drug dealers are infiltrating the demonstrations to commit these acts of abuse and vandalism. The accusation seems absolutely unsubstantiated, serving as a mere justification for the unmeasured brutality with which the government has been fighting protests. Iván Duque is the most affected by the demonstrations, which challenge his economic plans and the arbitrary way in which he authorizes his soldiers to use force. Several groups are assisting in the demonstrations, including civil organizations, student movements, indigenous peoples, and political opponents of Iván Duque. Therefore, there is Duque's interest in justifying the violence.

The most curious fact about the Colombian case is to note the inertia of the Western governments and media outlets. Organizations in defense of human rights are acting timidly against Iván Duque. Few repudiation notes have been released and in the diplomatic field the US and EU do not speak about sanctions, maintaining absolute neutrality. In fact, Colombia is a satellite state of Western interests in South America, being a NATO partner nation and an important strategic ally of the US, which uses Colombian territory as a route of access to Venezuela, financing the constant entry of mercenaries in the Bolivarian country through the Colombian border. Biden sent American officials to Colombia in April, endorsing diplomatic ties, and defining new strategies. This relationship is very solid and will not deteriorate easily.

However, it is necessary to analyze the realistic and geo-strategic character of Colombian importance to the US also considering the ideological factor, which is very present in Biden and his team. The American president started a diplomatic crisis with Saudi Arabia due to ideological issues related to human rights abuses, so it is absolutely possible that in the face of a scenario where dozens of people are shot in the daylight by the police, Biden takes a tougher attitude, sanctioning Colombia. But for this to happen, the situation will certainly have to get even worse, leaving a greater number of victims and generating a much greater global popular commotion, because while it can ignore what is happening in Colombia, Washington will do it.

Meanwhile, the Colombian people suffer under a dictatorial government, which uses extreme force against its own population. With a strong international structure in South America, with States cooperating with each other, the other nations would denounce the case to international society and Duque would be forced to change his attitude in the face of constraint and sanctions. However, with South America divided between states with rivalry of interests and in the midst of a major reactionary wave, the violence tends to increase more and more.