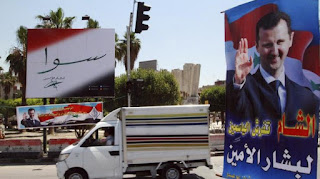 During a monthly Security Council session on Syria on April 28, London, Washington and Paris stated that they will categorically refuse to recognize the result of the upcoming May 26 Syrian presidential election – and this exposes the West’s own hypocrisy.

“France will not recognize any validity to the elections planned by the regime at the end of May,” said the French ambassador to the UN, Nicolas de Riviere. Her British counterpart, Sonia Farrey, said that “Elections that take place in the absence of a safe and neutral environment, in an ongoing climate of fear, when millions of Syrians depend on humanitarian aid... do not confer political legitimacy, but instead demonstrate disregard for the Syrian people.” U.S. ambassador to the UN, Linda Thomas-Greenfield, said “the failure to enact a new constitution is proof positive that the so-called election on May 26 will be a sham.”

After 10 years of conflict, Western countries are sticking to their position: dogged opposition to Syrian President Bashar al-Assad despite the reality that his government not only survived a decade of Western-Turkish-Arab Gulf aggression against it, but remains highly popular with the people. In fact, Assad has support amongst usually ideologically opposed parties too, such as the nationalist Syrian Social Nationalist Party and the Syrian Communist Party.

Assad submitted his candidacy on April 21 and is on the verge of winning his fourth consecutive term since the death of his father Hafez in 2000. Westerners say that there is only one candidate, but to date 51 people, including seven women, have applied their candidacy. But as France, the United Kingdom and the U.S. have no influence over the election or the majority of the Syrian population, they have to reduce their input to bemoaning the upcoming election and showing hypocritical crocodile tears for refugees.

It was expected that Assad would follow the same path as Saddam Hussein or Muammar Gaddafi. However, having failed to topple Assad, the West now adorns itself with the principles of human rights by showing rhetorical concern for Syrian refugees, whilst at the same time imposing crippling sanctions and creating an energy crisis by illegally controlling Syria’s oil fields and blockading oil imports from abroad. The knock-on effect of the U.S.-manufactured oil crisis has seen Syria struggle to feed its population and deal with the COVID-19 pandemic.

In June 2020, with the Caesar law, the U.S. further tightened economic sanctions against Syria. By targeting Syria’s banks, Washington managed to target the entire population. Despite the harsh reality of sanctions and blockade, the British Ambassador still had the audacity to condemn the upcoming elections because “millions of Syrians depend on humanitarian aid” without explaining that the West created the very conditions for millions of Syrians to become reliant on humanitarian aid.

Although the fighting has mostly diminished and is currently reduced to skirmishes in Idlib and eastern Syria, the country is struggling to rebuild itself. Chinese, Russian, Iranian, Saudi, Emirati, Indian and Greek companies are lining up to be involved in the reconstruction of Syria, but U.S.-imposed sanctions are preventing many projects from seeing the light of day. Moscow is also playing an active part by encouraging other countries to be involved in Syria’s reconstruction, especially after Foreign Minister Sergey Lavrov toured the Gulf last March to encourage Arab investments in the war torn country.

After a decade of conflict, Western policy on Syria has not budged one iota as they cannot accept that Assad remains the president of Syria. This year’s elections will have external electoral monitors from Arab States - Algeria, Oman and Mauritania – highlighting that Syria’s rapprochement with the Arab World is well underway.

Although the U.S. Ambassador to the UN stressed the need for “the participation of refugees, internally displaced persons, and the diaspora in any Syrian elections,” it is recalled that in 2014 the U.S., United Kingdom, France, Turkey and other regional and Western countries did not allow expatriate voting to be held in Syrian diplomatic missions.

Therefore, next month, just like in 2014, Western powers will challenge the legitimacy of the election despite the presence of international monitors. They will also inevitably claim that not all Syrians were represented despite the likelihood of this year’s election having a greater voter turnout then recent U.S. elections. It is also likely that anti-Assad states will prevent Syrians from voting in local diplomatic missions.

In this way, not only has the West failed to topple Assad, but their insistence on remaining hostile sees them missing out on being awarded valuable reconstruction contracts that will be instead go to Syria’s closest allies like Russia and Iran, or those who re-established relations with Damascus like Saudi Arabia and the UAE.
By Paul Antonopoulos, independent geopolitical analyst
Source